Description: This study guide covers chapters 1-4 and some information included in the introduction to the class. Visuals were created by me. Chapter 5 has not yet been covered.

Definition: ​Economics is the social science that studies the choices that individuals, businesses, governments make regarding allocating resources in response to SCARCITY​.

- Choices are influenced by incentives​: a reward that encourages an action or a penalty that discourages actions.

Why economists care about inflation? 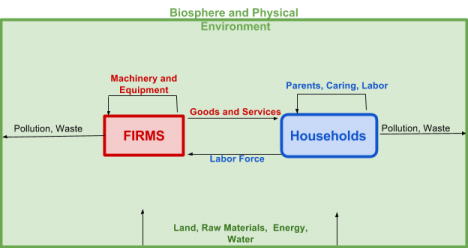 It is the rate at which inflation occurs, what is it?

Don't forget about the age old question of Which microorganisms can fix atmospheric n2 & change it into a form that is possible for other organisms to use?

Capitalism-​ ​an economic system where the main institutions are private property, markets, ad firms If you want to learn more check out When did studying the consumer become important?

○ Firms- ​business organizations that use inputs to produce outputs

Positive Statement- ​A statement that can be tested against facts.

Normative Statement-​ An expression of opinion, cannot be tested against facts * Know these terms to be able to understand the context of questions 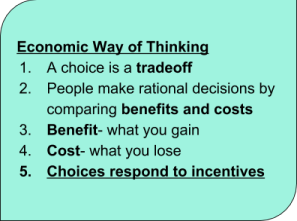 Chapter 1: A Tour of the World

● Many mortgages were given out for homes, banks then sold them to third parties to make $$ quickly. The financial crisis (stock market crash) correlated with the economic crisis, but did not cause it.

○ Emerging economies were uniquely not affected as much by this event.

Standard of Living- ​Quality of life, GDP is one way of estimating this. We also discuss several other topics like What inspired le sun to dig a cave-temple in dunhuang, china?

Federal Funds Rate- ​The interest rate on federal bonds. *Decreased during 2007 crisis in order to incentivise people to sell bonds, hold money, and stimulate the economy. - Zero Lower Bound: ​If the interest rate was negative, there would be no incentive to hold bonds

Productivity Growth- ​Important for sustained increase in income per person.

- Determining how to function efficiently within the EU when different countries have different economic problems.

PPP (Purchasing Power Parity)-​ Considering how if the value of the same goods in one economy differ from that in another, the same amount of money can buy different amounts of goods.

Chapter 2: A Tour of the Book

1. GDP is VALUE OF FINAL GOODs AND SERVICES produced in the economy during a given period.

a. Final Goods, not Intermediate goods

2. GDP is the sum of VALUE ADDED in the economy during a given period a. Value added = the value of production minus the value of intermediate goods used in the process.

3. GDP is the SUM OF INCOMES in the economy during a given period of time a. Labor Income- wages

● Production of most goods increases

● Price of most goods increases

REAL GDP-​ The sum of the quantities of final goods, times constant (not current) prices 2009: Real GDP = Nominal GDP​ often used as a good base year for constant prices.

Discourage Workers- ​People no longer looking for jobs, excluded from the labor force and unemployment

INFLATION- ​ a sustained rise in the general levels of prices

INFLATION RATE- ​the rate at which inflation occurs

The Consumer Price Index (CPI): ​The thing used to measure the cost of living What is it? ​A compiled list of specific goods and services (basket), average quantities consumed in a year, and cost in dollars

Why Economists Care About Inflation:

● Pure Inflation: ​when a % increase of inflation translates to the same increase of wages (real wage) This doesn’t exist!

● Inflation affects income distribution when not all wages rise proportionally ● Some prices and taxes are fixed, thus, costs are distorted during inflation ● Best inflation rate is between 1-4% (FED target is 2%)

● Taxes also do not adjust well to

CONSUMPTION (C) -​ ​goods and services purchased by consumers (the largest component!) INVESTMENT (I) - ​of fixed investment - the sum of non-residential investment and residential investment. Note: Buying a house is under the category of investment, not consumption. GOVERNMENT SPENDING (G) -​ ​purchases of goods and services by the federal, state, and local governments excluding Government Transfers - i​ ndirect consumption. Expenses incurred by the gov’t, but consumed​ by the people.

EXPORTS (X) -​ ​Purchases of goods and services by foreigners

INVENTORY INVESTMENT - ​The difference between production and sales (inventory positive if production exceeds sales). Things produced, but not sold.

So that the equation for demand in this model is...

(3-3) The Determination of Equilibrium Output

Equilibrium in the Goods Market- ​requires production, Y, to be equal to demand for goods Z, Y=Z, I is fixed (“I-bar”) ​*​Watch videos posted on canvas from week 2, they explain graphs! Z ≡ C + I + G

If Y=Z (in equilibrium), then

● The MULTIPLIER:​ is a number greater than 1 because 0<C​1​<1. ​Any changes made to autonomous spending will be amplified by the multiplier.

● AUTONOMOUS SPENDING: ​Spending that doesn’t depend on output.

And so forth… until equilibrium between Income and Demand/Production is equal. *Understand that this concept explains how a change in one factor is followed by other changes that result in a new point of equilibrium.

“Money”​ are used for transactions, but it pays no interest.

“Bonds”​ pay positive interest rates, but cannot be used for transactions How much of bonds or money should a person hold?

- Level of transactions; How much money do you need?

- The interest rate of bond; How much money could you be making from holding bonds?

Money- ​is what can be used to pay for transactions

Income- ​is what you earn

Financial Wealth-​ or wealth, is the value of financial assets minus financial responsibilities

Financial Investment- ​is the purchase of shares or other financial assets

DEMAND FOR MONEY (M​d​):​ Roughly proportional to nominal income ($Y) times a decreasing function of the interest rate i. The interest rate has a negative (-) effect on Md. An increase in income would shift the Md curve to the right because having more income, means wanting more money to spend in the economy.

In EQUILIBRIUM, Money Supply (M​s​) should equal Money Demand (M​d​).​ In the model, if we assume all money is supplied by the government, money supply, is equal to the amount the government decides to supply (M).

Assets of the Central Bank: ​The bonds it holds

Liabilities of the Central Bank: ​The stock and money in the economy

Determining the Interest Rate: ​Suppose a bond such as a Treasury Bill promises to pay $100 1 year from now. If the price of the bond today is $PB, then i on the bond is: $100−$Pb

Determining the Price of Bonds: $PB = 1+i

Note: ​Rather than money supply, the central bank typically chooses an interest rate, and adjusts the Ms

Reminder: ​In reality, not all the money in the economy is supplied by the Central Bank. Money also includes currency and checkable deposits provided by private banks. - Banks are a type of Financial Intermediary​- institutions that receive funds to buy financial assets or to make loans to other people

(4-4) The Liquidity Trap: ​The Government can choose the interest rate it wants on bonds. IMPORTANT CAVEAT: The interest rate cannot go below the zero lower bound. - When i reaches zero, monetary policy cannot decrease it further.

- Liquidity Trap! ​In a crisis, the government has no capacity to stimulate the economy once the interest rate reaches zero.

- On a graph, the demand for money becomes horizontal at i=0. Further changes to Ms will have no effect on i.

What is the definition of consensus?

What is the mucosa in the internal tract?