Description: Notes for chapters 1 and 2 (notes for exam 1)

o A mixture of gases

o Treated as one individual gas

 Uses a lot of energy

What are permanent gases?

∙ Occur naturally without our influence

∙ Without greenhouse gases, the earth would be very cold

o Noble gases include Neon (Ne), Helium (He), Hydrogen (H), and Xenon (Xe) ∙ Major Gases  If you want to learn more check out What is the behavioral perspective on development?

What are variable gases (trace gases)?

 Relatively inert; not flammable, not going to do anything unless we do  something to it

 We do not use the N2 we breathe

 Causes the bends in scuba

∙ Ex. If you blow on a fire and give it more air, the fire will grow

o Argon (Ar) 0.93% We also discuss several other topics like How do cognitive factors influence personality?
If you want to learn more check out What is the orientation of mosques and prayer in the islamic world?

 From radioactive decay and formation of Earth Don't forget about the age old question of What are the factors of social environment?

 Exists as vapor, liquid, and solid in atmosphere If you want to learn more check out What is the main function of glial cells?

∙ Questions on the test:

∙ Aerosols in the Atmosphere

o What are clouds made of?

o Water has to stick to something

 Large droplets will form when there are not a lot of things for it to stick to  Other common – dust, pollen, spores, bacteria, emission pollutants, salt,  ash, smoke, etc.

∙ The Weight of the Atmosphere

o How high does the atmosphere go? If you want to learn more check out Define the placebo effect.

o Gravity keeps molecules in the atmosphere and oceans pinned to the planet,  giving them weight

o The atmosphere does not end abruptly

o At most times, the density of air is greatest near sea level because the weight of  the atmosphere above compresses the air

 The lower you get in pressure the faster the water is forming clouds,

∙ Layers of the Atmosphere

o Homosphere behaves as one, evenly mixed and acting as one body of air   Where we are located

o The homosphere and the heterosphere layers of the atmosphere are based on  concentrations of gases. Homo – acts as one, hetero – mixed unevenly

o 4 layers separated by changes in temperature with height

∙ The slower something usually means its colder

 You can only feel heat if it touches

∙ Heat is the idea of energy transfer

* Every time you switch layers, the weather is the alternates* 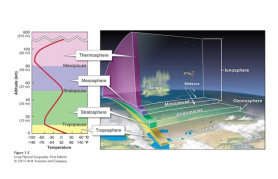 o Height is different on different parts of the Earth

 Stands tallest at the equator because it is so warm

o All weather occurs in the troposphere

o As one moves higher in the troposphere, air temperature generally decreases o Environmental Lapse Rate: The rate of cooling with increasing altitude in the  troposphere. Unique to all locations

meters it climbs up

 Usually no more than a few hundred meters thick

 Can trap pollutants near the ground surface 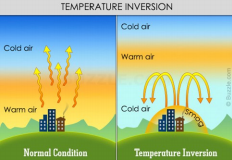  Roughly 80% of atmosphere’s mass is in the troposphere

 Where all Earth’s weather occurs

 Almost all clouds, and all storms and precipitation are limited to the

∙   The Tropopause: Where the Troposphere Ends

o Almost all clouds tops end at the tropopause, due to the temperature inversion in  the stratosphere

o Height of the Tropopause

∙ Earth rotates faster at the equator than at polar regions

o   Temperature Inversion: A layer of the atmosphere in which air temperature  increases with increased height

o A Protective Shield: The stratosphere

 Without the ozone, we wouldn’t be able to hold much heat and our skin  cancer rates would be much higher

∙    Absorbs radiation to keep us nice and warm

o UV absorption in the Stratosphere

    Ozonosphere: A region of stratosphere with high concentration of ozone  that block UV radiation

o At night, it stands taller and the frequency can bounce better

o What are northern lights?

o Harmful concentrations of gases or aerosols in the atmosphere

o Pollution originates from natural as well as anthropogenic sources

o   Primary Pollutant: enters the air or water directly from its source

o In Asia and China, they get it from factories, Africa gets it from fire and  deforestation

 May irritate the eyes, nose, and throat, and can lead to liver, kidney, and  central nervous system damage

o Photochemical smog: formed by the action of sunlight on tailpipe emissions  o Ozone (O3): a pollutant in the lower atmosphere

o Particulate Matter (PM): Can be either primary or a secondary pollutant

 Liquid and solid particles (aerosols) suspended in the atmosphere

∙ Can cause or worsen physical ailments (e.g. bronchitis, asthma,

∙ Can enter the atmosphere via dust storms in desert areas…little

and snow carry them to Earth’s surface

o CFCs can last in the atmosphere for more than 1,000 years

o Chlorine from CFCs destroys ozone in the ozonosphere

o The ozonosphere has thinned dramatically, particularly over Antarctica (due to  nacreous clouds)

o As CFCs slowly disappear, the ozonosphere will repair itself

o Without the protective ozonosphere, life on land would be impossible o Thinning ozone contributes to human health issues such as skin cancer, reduced  immunity, and cataracts

∙ People and the Seasons

 When you actually feel it

∙ Plane of the Ecliptic: flat plane that the orbital paths of the planets trace  o Earth is closer to the Sun in January (perihelion) than it is in July (aphelion)  o Day time and night time is caused by the rotation

o When we are farther away from the Sun it is the Aphelion (during summer) o We are closer to the Sun during winter time; Perihelion

o Seasons are caused by tilt of Earth’s axis, NOT by the changing distance between  Earth and the Sun

∙ The movement of Earth

o Earth’s revolution and the plane of the ecliptic

o Subsolar Point: Single point at which Sun’s rays are perpendicular to Earth’s  surface at or near noon (between 23.5° N and S)

 subsolar point determines solar altitude (angle of the Sun above the

∙ Subsolar point migrates between the Tropics of Cancer (23.5°N)

∙ Latitude of the subsolar point is called the solar declination

*Determining the solar declination any given day*

o June Solstice – longest day of the year in the Northern Hemisphere. Days get  shorter after the June solstice until we reach the…

o December solstice – shortest day of the year in the Northern Hemisphere. Days  get longer after this until the June solstice

o Everything is opposite in the Southern Hemisphere

∙   What is Temperature?

o When molecules are no longer moving, a point of 0 kelvins, or absolute zero is  reached

o A formula for converting °C to °F is

o A formula for converting °F to °C is

o Heat: the internal energy transferred between materials or systems due to their  temp differences

o Conduction: process by which energy is transferred through a substance or  between objects in direct contact (touching)

 heat always flows from objects of higher temp to objects of lower temp  o Convection: the transfer of heat through movement of mass within a fluid (liquid  or gas)

 Why we get rain, hurricanes, and thunderstorms

o   Radiation: process by which wave energy travel through the vacuum of space or  through a physical medium such as air or water

∙   Difference between the avg. max. and avg. min. temps over a year at a location is its  annual temperature range, or seasonality

o The farther you get away from the equator, the wider the annual temperature  range is

∙   Avg. annual temp at any given location is controlled mainly by elevation and latitude ∙ Elevation influence

o In the troposphere, temp decreases with altitude

o Why the difference?

o The amount of heat that must be absorbed to change the temp of an object  o Due to heat capacity, generally, continents become warmer in summer than  oceans at the same latitude

o Land can hold onto tons of energy whereas water cannot

o Water is transparent, but land is opaque… convection mixes water warmed by  sunlight with cooler water at greater depths

o Prevailing wind is from the west, so west coasts (generally) have maritime  climates and east coasts have continental climates

o Pattern is strongest at midlatitudes, and weakened in the Southern Hemisphere,  polar regions, and tropics

o Energy that is propagated in the form of electromagnetic waves (e.g. visible light  and heat)

o All matter emits photons (packets of energy) of electromagnetic radiation  o Photons travel in waves, and the distance between the peaks of two waves is the  wavelength 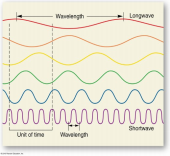 o The hotter something is, the shorter its wavelengths are 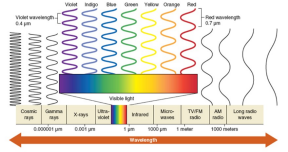 Most intense ae purple and blue, longest wavelengths are orange and red. Things on the left hurt you and the things on the right do not.

o Earth emits energy at a lower rate than the Sun

o All radiation emitted by Earth is longwave radiation (LWR)

o Most solar radiation is in visible wavelengths

o Clouds and aerosols help determine how much UV radiation reaches Earth o UV radiation is subdivided depending on its wavelength: UV­A, UV­B, and UV C

o 44% of solar radiation is in visible wavelengths

o When all visible light colors are combined, they blend into white

o Black (true darkness) is the absence of all light

o The fraction of the Sun’s Energy that Earth intercepts

o Insolation is transmitted, scattered, reflected, and absorbed as it travels through  the atmosphere

o The unimpeded movement of electromagnetic energy through a medium such as  air, water, or glass

o Scattering: The process of redirecting solar radiation in random directions as it  strikes physical matter

∙ Blue has the highest intensity, so the sky is blue during the day

∙ When the sun sets, the sky color changes because the intensity is

changing as the sun drops

o Reflection: The process of returning a portion of the radiation striking a surface in the general direction from which it came

o Reflectivity of a surface, given as the % of incoming radiation that it reflects  o Lighter­colored surfaces have a higher albedo than darker surfaces

 Earth does not emit light – only reflects it

 Earth is visible from space because it reflects sunlight

*Refraction: the bending of light

o Radiative Equilibrium Temperature: Temp of an object resulting from the balance between incoming and outgoing energy

o Without any greenhouse gases, Earth’s lower atmosphere would be much colder  (inhospitable to most life) …BUT

o At most latitudes, there is either a surplus or a deficit of heat

o Heat from tropics is advection (horizontal movement of energy: AKA the wind)  poleward by the atmosphere and the oceans

o Heat is transferred to the atmosphere through radiation

 Almost all atmospheric movement (e.g. wind, tornadoes, etc.) is the result  of heating inequalities across latitude and altitude

*Because some places are warm and some are cold, we get changes in the  weather.

You are in Baton Rouge on June 13th, how many hours of daylight will there be?

D. 5 – its summer in Baton Rouge, so this is the longest time of daylight

Where did charles beard graduate in indiana?

State the types of failure associated with a disability.