IUPUI / Chemistry / CHEM 384 / What is the difference between a nucleotide and nucleoside?

Description: This includes the lecture expectations and answers. I also suggest you look over the professors' lecture 1-3 problems on canvas and the quizzes. Good Luck!

1.) What is the difference between a nucleotide and nucleoside? a. Nucleotide: Has a base, sugar, and phosphate. Has  directionality

b. Nucleoside: Missing the phosphate(s)

2.) Draw and name the 16 possible nucleotides/nucleosides that can be formed  from the 5 major bases

What are the major features of B form DNA?

3.) Describe how nucleotides are joined together to form nucleic acids: a. Through phosphodiester bonds.

b. Phosphodiester bonds link C3’-OH of one nucleotide with C5’- Phosphate of the next

4.) How are features of purines/pyrimidines responsible for the chemical/physical properties?

a. Pyrimidine attaches to sugar at C1’ in the ring while Purine  attaches to C9’. And purine is a larger molecule

6.) How did Watson and Crick come to their double helical DNA model? a. Chagaff’s Rule (A:T and G:C)

7.) What are the major features of B form DNA?

What is a Palindrome?

If you want to learn more check out karla fant

a. Watson and Crick model

a. A is found in absence of H2O, wider and more compact, and  may be an artifact of crystallization

a. Z is left-handed helix, more extended, formed by particular  base sequences, and has a potential regulatory role

a. Same forward as backward (Ex. Racecar) We also discuss several other topics like usc cs103

a. Palindromic on outsides of structure, but different between the two. Common in RNA

13.) How can single-stranded RNA have a secondary structure or tertiary  structure?

a. Tertiary is more complex than secondary, but less stable b. I believe Blacklock just wants us to understand there are two  different types of structures RNA can have and that they  involve hairpins, loops, and bulges

14.) What is the relationship between Tm and DNA denaturation? a. Tm is when 50% of the sample has been denature

15.) What are the different DNA alterations that can occur? a. Deamination of bases

b. Hydrolysis of N-beta-glycosidic bond

a. When DNA ‘replicates’ its structure (creates the same  sequence 5’ to 3’)

a. DNA is copied into RNA

18.) What is translation? Don't forget about the age old question of animal diversity notes

a. mRNA to protein

19.) Know how to deduce a RNA/protein sequence based on any RNA/DNA  sequence given the genetic code Don't forget about the age old question of gwendolyn hustvedt

c. RNA to protein is when you look at what the genetic code is.  Arg, Cys, Etc.

20.) What are the fundamental differences between RNA and DNA? a. The organic bases and Ribose units

21.) Determine sequence of a stretch DNA using radiolabelled or automated fluorescent Sanger sequencing and understand how these differ. Unknown.

1.) Describe the main features of an amino acid

e. BUT PROLINE IS DIFFERENT: It has a secondary amine) 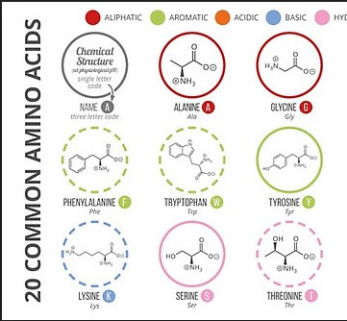 -Some hard to see: And pink means Hydroxylic Don't forget about the age old question of niel bohrs model 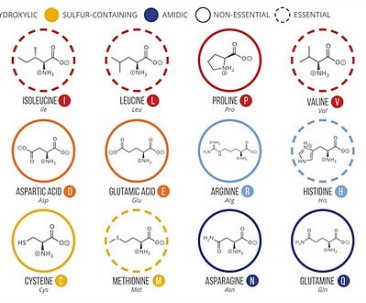 3.) Be able to draw any peptide, including correctly drawing the peptide bond: a. Slides 24-26 help explain this  We also discuss several other topics like william francis crooks

a. Cofactor: Help many proteins/enzymes function

b. Coenzyme: A cofactor that is organic

c. Conjugated Protein: A protein with a tightly associated  cofactor

6.) Why is protein purification important and what is the basic goal of all  purifications?

a. Importance: To identify and more clearly analyze proteins b. Goal: To maximize specific activity while losing as little of your  protein as possible

7.) Describe principles behind the different kinds of chromatography:

a. Ion Exchange Chromatography: Proteins stick to it based on  their net charge (can change with pH)

i. Anion Exchange: Resin is positively charged. More net  negative the protein is, the tighter it will bind

ii. Cation Exchange: Resin is negatively charged. The more  net positive the protein is, the tighter it binds

c. Affinity Chromatography: Protein binds ligand and remains on  column as other proteins flow through.

i. Protein must be eluted off column by solution that

8.) Understand principles of electrophoresis and advantages of SDS a. Electrophoresis: Method used to separate proteins.  i. Polyacrylamide matrix acts as sieve

b. Advantages of SDS:

i. Binds protein rather uniformly (1 SDS every 2 amino  Acids)

iii. Allows separation based on size/length

1. Break it up into smaller pieces

3. Assemble to get full length

10.) Be able to apply these principles of chromatography, electrophoresis,  purification, and sequencing to problems

1.) Identify the 4 levels of protein structure:

2.) Describe partial double bond character of peptide bonds and its implications  for structure:

a. Character: Makes the C-N bond rigid, not rotation possible  about C-N, planar, weak dipole, most peptide bonds are trans b. Implications: Rotation possible about the bonds connected to  the alpha carbons (phi and psi)

c. In fully extended polypeptide, both angles are 180 degrees

a. Tightly wound, backbone on inside so R groups face out, right  handed

5.) Identify which amino acids are (are not) found in helices

a. Ala and Leu are frequently found in helices

b. Others depend on context. See table 4-2 on slide 19  c. Gly and Pro are rarely found in helices

a. Made up of a series of strands that adopt beta conformation b. Beta strands are More extended than alpha helices c. Several strands come together to form sheet

e. R groups always on the same side of sheet

a. Occur when strands in beta sheets change direction b. 180 degree turn is accomplished over 4 amino acids c. Stabilized by H-bond from carbonyl “O” of n-th residue to  amide “H” of the (N+3)-rd

a. Fibrous: Typically insoluble; made from single secondary  structure

b. Triple Helix: Three chains twist around each other to form this.  Super strong!

a. Motif: Recognizable folding pattern found in a number of  proteins

i. 2 or more secondary structure elements. Large or small ii. May/may not be independently stable

b. Domain: Self-contained part of a protein

iii. Small proteins have 1 domain (domain would be the  whole protein)

iv. Large protein can have several

v. Can have its own function

a. Most proteins don’t have disulfide bonds to help stabilize them b. They have weak interactions

c. These add up and help stabilize protein

d. Hydrophobic Effect: Non-polar R groups exposed to solvent in  U state cause ordering of water (which means entropy of water is decreased)

a. Ribonuclease A; RNaseA discovery

i. Found it was a VERY STABLE protein

d. Gibbs free energy of the whole system is lowest when the  protein is in the native state

a. Given protein can’t and does not sample every possible  conformation at random

c. Folding CANNOT be purely thermodynamic because that would  take too long

i. So folding must also be under kinetic control

a. Folding can’t be just a tunnel to native state

b. So it must be a funnel where there is no “single” U state  where all molecules are in an identical conformation. So no  “single” pathway

a. Compact structure that contains some (or all) secondary  structure, but little/no tertiary structure, with a hydrophobic  core not yet fully buried

a. Some proteins require help reaching the native state b. Chaperones assist both types of process: Folding off ribosome  and Returning folded protein to native state if it unfolds c. Prevent unwanted (or improper) interactions= aggregation 7.) Differentiate two types of chaperone function (holding vs. folding). How are  hsp70 and GroEl are examples?

a. Hsp70: Recognizes stretches of hydrophobic residues in  unfolded proteins and grab onto them

i. Utilize ATP to cycle between high and low affinity states ii. Does not work alone

i. Cycles of binding and release

ii. During release, protein has opportunity to fold

iii. If not fully folded…rebound

a. Protein can fold in peace away from other

b. ATP is used to cycle between protein bound

8.) Describe what conditions lead to aggregation:

a. Being around other unfolded proteins

b. High protein concentrations inside cells

b. Amylin can form amyloid

c. Amyloid can kill cells and cause issues

a. No defined structure

a. Induced fit: Only the proper substrate is capable of inducing  the proper alignment of the active site that will enable the  enzyme to perform its catalytic function

b. Allostery: The process where proteins transmit the effect of  binding at one site to another, like distal, functional site,  allowing for regulation of activity

c. Cooperativity: The shape of one subunit of an enzyme  consisting of several subunits is altered by the substrate or  some other molecule. End up in a sigmoidal curve (change  between high or low affinity states)

2.) Write the mathematical expression for KD and theta ϴ

3.) Locate KD on a binding Curve

4.) Understand basic structure of heme and how oxygen can CO bind to it: a. Heme = Iron + protoporphyrin IX

b. Rigid and planar. 4 Nitrogens for binding sites.

c. CO has similar shape to O2 to fit in the same binding site. d. Better than O2 to bind to free heme, because it has a filled  lone electron pair to donate to Fe2+. Protein pocket decreases  affinity for CO.

5.)Understand how anatomy of myoglobin/hemoglobin contributes to oxygen  binding (role of proximal histidine; distal histidine; helices F and E) a. Myoglobin: Storage of oxygen for metabolism. 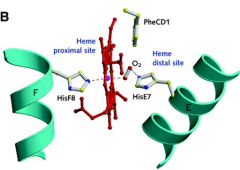 i. [O2]: Not easy to measure so use partial pressures

iii. Would Myoglobin be a good O2 carrier from lungs to  tissue? No because it would hold on too tightly and not

6.) Understand the significance of the sigmoidal binding curve of Hb for oxygen a. If there is an uptake of O2, the curve shifts to the left towards  high-affinity state

b. If there is an O2 release, the curve shifts to the right towards  the low-affinity state.

7.) Differentiate between the T and R states of Hb

8.) Express binding of oxygen to Mb and Hb mathematically (in terms of partial  pressure)

9.) Understand the derivation of the Hill equation and what it (and the Hill plot)  tell us

b. If slope = 1, then the binding of ligand is NOT COOPERATIVE c. If Slope > 1, binding IS COOPERATIVE

10.) Describe the differences between the MWC and KNF cooperativity  models

a. MWC: Concerted, “All-or-None” transition, no intermediate  states, all states in equilibrium

b. KNF: Sequential, Mixed states allowed, all states in equilibrium 11.) Understand how oxygen transport is affected by CO2, pH, and BPG a. BPG: Binds and stabilized T state.

b. CO2: Binds as carbamate to each of the four amino termini in  Hb 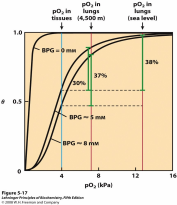 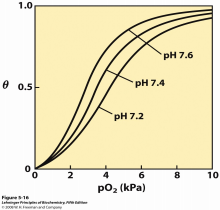 12.) Know the cause and effect of sickle cell anemia

a. Antigen: Toxin that induces immune response in the body,  especially production of antibodies

b. Antibody: Blood protein produced in response to antigen.  Antibodies combine chemically with substances that the body  recognizes as alien

c. Epitope: the part of an antigen molecule to which an antibody  attaches itself

14.) Understand basic structure of an antibody 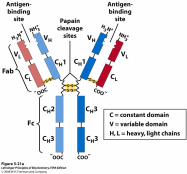 15.) Describe use of antibodies in biochemical assays:

b. ELISA: In plastic dishes

c. Immunoblot (Western): On membrane after SDS-PAGE d. Used to detect presence of molecule of interest in sample e. Can be conjugated to beads and beads packed into column for  chromatography (affinity chromatography)

What are the 3 branches of the government?