Description: I am sending a new link because some people emailed me that it wasn't working.

WHAT IS CRITICAL THINKING?

CRITICAL THINKING HAS THE FOLLOWING CHARACTERISTICS:

● “critical thinking is responsive to and guided by intellectual  standards and supports the development of intellectual traits in the  thinker.” Paul (1995)  We also discuss several other topics like cse 143

● It is “thinking in which the thinker can identify the elements of  thought [reasoning] that are present in all thinking about any problem (p. 22)”

●  “routinely self­assessing, self examining, and self­improving.” (p. 22). ●  it is “thinking in which there is an integrity to the whole system” that  “yields a well­reasoned answer because of the comprehensive and  demanding process that the thinker pursues.”

●  it “is thinking that is responsive to the social and moral imperative to  not only enthusiastically argue from alternate and opposing points of  view, but also to seek and identify weaknesses and limitations in  one’s own position.” (p. 23)

Objectives Reflecting the Elements of Reasoning

“A good critical thinker in general psychology employs the elements  of reasoning in a systematic way that allows the fullest breadth and If you want to learn more check out speech final exam study guide
We also discuss several other topics like during puberty, the growth spurt proceeds in a fashion _____ to the proximodistal sequence.

depth in thinking. The elements of reasoning are reflected both in the  logic of science and in the logic of general psychology.” ● Key Question: How can the science of psychology help us describe,  predict, control/change, and explain human behavior and mental  processes?

● Interpretation and Inference:  Students will learn how psychologists gather and interpret data and apply same to the issues studied in the  course.

What is an example of biological perspective?

● Information:  Students will learn the benefits and limitations of the  scientific method and theory in describing, predicting,

● Assumptions:  The fundamental assumption of this course is: there  are intelligible and discoverable reasons why humans behave, think,  and feel the way they do.

● Points of View:  Students will learn how to reason using data derived from the scientific method (i.e. careful observation and systematic  study) and to analyze and evaluate human behavior and mental Don't forget about the age old question of uh kinesiology

● Analyze, evaluate, and apply the above to human functioning and  adaptation AND to issues of diversity and technology.

● Excel in a learning environment that respects the cultural, individual,  and role differences, including those due to age, gender, race,  ethnicity, national origin, religion, sexual orientation, disability,  language, and socioeconomic status of members of the class. Don't forget about the age old question of organizational behavior exam 3

● Engage in a course pedagogy that will include lecture, discussion,  demonstrations, and Socratic questioning.

● Textbook Definition of Psychology­  “The science of behavior and  cognitive processes.”

○ Behavior­ refers to overt behaviors that are easily observed  more or less objectively.

○ Mental Processes­ those dynamic processes that are not  readily observable but may be inferred from behavior, self reports, etc.

○ Context­ the social and cultural context of any behavior.

● The Goals of Psychology:

■ What? Don't forget about the age old question of peter marsden berkeley

■ Description­ tells what the characteristics of behavior and  mental processes are.  The research method is

■ Explanation­   Finding the causes of behavior & mental  processes.  It tells why it occurred.  The research method  is experimental.

■ Prediction­   tells how likely a particular behavior/mental  process will occur in the future.  This is a higher level goal once the “what” and “why” are answered.  The research

■ Control­  apply research finding to change behavior or  circumstances.  The use of control in psychological

experiments; the method is experimental.

The Historical Context of Psychology

The Philosophical Roots Of Psychology

○ focus on the battle between human reason and animal  passions

○ contributed to our knowledge of medicine.

○ knowledge is the product of inborn cognitive faculties that  organize and interpret sensory input.

○ research on the localization of brain functions

○ founder of differential psychology, which studies variations  among people.

○ Often cited as being the first psychology professor—U of  Pennsylvania

○ Often cited as establishing the first psychology laboratory  (1879) at the University of Leipzig, Germany

● Structuralism could only be studied in the laboratory.

● Introspection was no reliable.

○ He encouraged psychologists to study how people functioned in the world.

● Principles of Psychology became a leading text of the day Functionalism

The Growth Of Psychology

○ Intrigued by the Phi phenomenon—apparent motion caused by  the presentation of different visual stimuli in rapid succession. ● Sigmund Freud (1856­1939)

● Early childhood experiences were the most important factor in  personality development.

● Regarded as the most important figure in psychology’s first century ● Criticisms:

○ Focus on the male experience

○ Focus only on observable behavior

○ Dominated psychology through the 1960s

○ Stressed the role of consequences in behavior.

● According to Kuhn (1970) “as a science matures, it develops a  unifying scientific paradigm, or model, that determines its appropriate  goals, methods, and subject matter.” (p. 13)

● Psychology does NOT have a unifying paradigm.

○ Example:  phenomenological psychologists would study a  person’s mental experience of depression not the observable  behavior or brain aspects.

● Existential Psychology­ studies how individuals respond to the basic  philosophical issues of life—death, meaning, freedom, and isolation. ● A prime mover in the field of psychotherapy.

● Made an impact in studying the positive aspects of human experience ○ i.e. love, altruism, the healthy personality, etc.

● The cognitive perspective focuses on the study of how the mind  organizes perceptions, processes information, and interprets  experiences.

● The biopsychological perspective stresses the relationship of  physiological factors to behavior and mental processes.

The Scope of Psychology

● Behavior is motivated by unconscious forces.

● The early years of life are important to later development. ● Defense mechanisms.

○ Popular in Europe and America in 1800s

● This was not based on good science.

The Birth Of Modern Psychology

■ Once you found the basic element, then what?  They had  no answer.

■ They asked how and why of behavior—the causes and  consequences of behavior.

■ The “stream of consciousness” a term still used today ● Psychoanalysis:

■ Role of the unconscious mind that contains unrevealed  wishes, passions, guilty secrets, unspeakable yearnings  and conflicts between desire and duty. 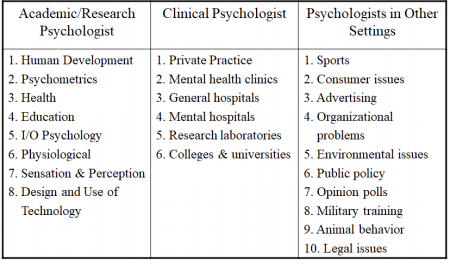 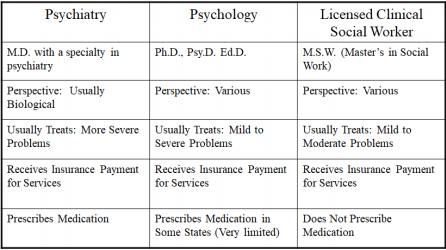 ○ Survey­ via a set of questions

○ Psychological testing­ a formal sample of a person’s behavior  or mental processes.

● Most researchers use a sample of a population.

● Random selection­ the method used to determine what part of he  population the sample will come from.

● Standardization­ consistent procedures for administering the test. ● Norms­ a set of scores used as a standard for measuring  performance.

● Research that studies the degree of relationship between two or more variables.

○ An IV is manipulated by experimenters.

○ The IV would be the cause  and changes in the DV.

○ A DV shows any effects of the IV.

■ Example:  A hypothetical experiment on the effects of  drinking on driving:

● The control group is exposed to the control condition. ○ Example: they receive the placebo (sugar pill).

● Internal validity refers to the extent to which changes in a dependent  variable can be attributed to one or more IVs rather than to a  confounding variable.

● Confounding variable is one whose unwanted effect on the DV might  be confused with that of the IV.

● External Validity refers to the extent to which the results of a research study can be generalized to other people, animals, or settings.

●  A positive correlation between two variables indicates that they tend  to change value in the same direction. 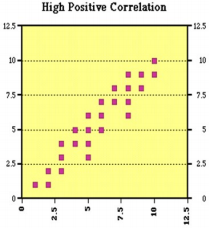 ● A negative correlation between two variables indicates that they tend  to change values in the opposite direction. 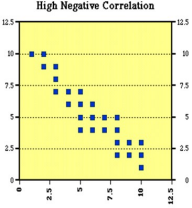 ● No correlation is present when two variable have no significant  relationship with each other. 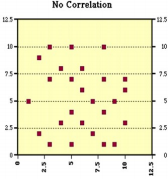 ● Correlation does not necessarily imply causation.

The Nature of Motivation

● Motivation­ the psychological process that arouses, directs, and  maintains behavior toward a goal

● Instinct­ a complex, inherited species­specific behavior pattern. ● The more complex the organism the less instincts are involved. ● Sociobiologists suggest that some social behavior does have a  genetic basis via evolutionary principles.

● The drive­reduction theory suggests that behavior is motivated by the need to reduce drives such as sex or hunger.

A need caused by physiological deprivation (lack of water) induces a  state of tension called a drive.

● An incentive is an external stimulus that pulls an individual toward a  goal.

● In this case money is a positive incentive.

● Some stimuli are undesirable and should be avoided; they are known  as negative incentives

● Arousal Motive­ refers to the motive to maintain an optimal level of  physiological activation.

● Two key researchers for the arousal motive were Yerkes and Dodson who coined the term: Yerkes­Dodson Law. 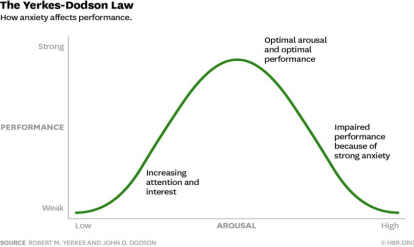 ● Achievement Motivation­ the desire for mastery, excellence, and  accomplishment.

● It can depend on expectancy (the probability of success).

● Unilateral Neglect­ a disorder caused by damage to the parietal lobe,  in which the individual acts as though the side of her or his world  opposite to the damaged lobe does not exist.

● The study of the evolution of behavior through natural selection  (Darwinian).

● Natural Selection:  “As long as particular physical traits provide a  survival advantage, those traits will have a greater likelihood of  showing up in succeeding generations. “ (p. 61)

● The study of the relative effects of heredity and life experiences on  behavior.

● Data often gathered through twin, family, and adoption studies ● There appears to be evidence of a hereditary basis for: delinquency,  intelligence, prosocial behavior, marital satisfaction, and antisocial  personality disorder.

● Genetics may not be the most important factor in the development of  behavior traits.

● For most psychological traits the proportion of individual variability  attributable to heredity is less than 50 percent.

● The genetic effects on our behavior are indirect, not direct like eye  color, hair color, etc.

● The genome project implies that behavior is often determined by the  interaction among genes (polygenetic).

● Heritability refers to the “proportion of variability in a trait across a  population attributable to genetic differences among members of the  population.” (p. 64)

○ EXAMPLE:  The heritability of Intelligence (as measured by IQ)  is approximately .50 strongly suggesting that environment plays a significant role.

● Famous Minnesota Twin study has found some uncanny similarities  in habits, abilities, and physiological responses of reunited twins.   ● Some of the similarities might be due to coincidence, living in similar

environments, or having contact with each other before being studied. ● But we are constantly reminded that life experiences are important.

What does organic/inorganic mean?