Recognize that hormones bind to receptors on the cell surface or inside the cell and that this depends on the chemical structure of the hormone:

Explain how hormones function in your body, including the roles of endocrine cells, circulatory system, target cells, receptors, and signal transduction. ● Endocrine cells release hormones into the bloodstream

● Once they bump into the target cells, they bind to the receptors (whether on the surface, if it’s NOT lipid soluble, or through the cell membrane, if it’s lipid soluble)

Tropic hormones are what?

● The moment the hormones bind to its target cells, it starts signal transduction pathways (from reception to transduction to response)

● Tropic hormones: hormones that regulate (stimulate or inhibit) the release of other hormones (example: GnRH)

● Non-tropic hormones: hormones that act DIRECTLY on their target cell !

Contrast releasing and release-inhibiting hormones and explain where they are produced in the body.

Create and evaluate analogies to explain how hormones function in the human body.

● Think back to the analogy you and your group members made!!!! ● Analogies must include these key terms:

○ Effect of hormone in the cell

○ Small amount of hormone can still have a large effect

○ Target cells exist in different kinds of tissues We also discuss several other topics like What is Biological Psychology?

■ Target cells in different kinds of tissues may respond to If you want to learn more check out What is Phylogenetic tree?

● Positive feedback loop: a change in parameter in one direction triggers a response that moves that parameter in the SAME direction (it’s almost like something keeps challenging it; it appears when there’s a “finale” that ends the loop: birth)

● Negative feedback loop: a change in a parameter in one direction triggers a response that moves that parameter in the OPPOSITE direction (=homeostasis, goal is to balance)

Identify positive and negative feedback loops in the hormonal control of reproduction, and explain the parts of the loop 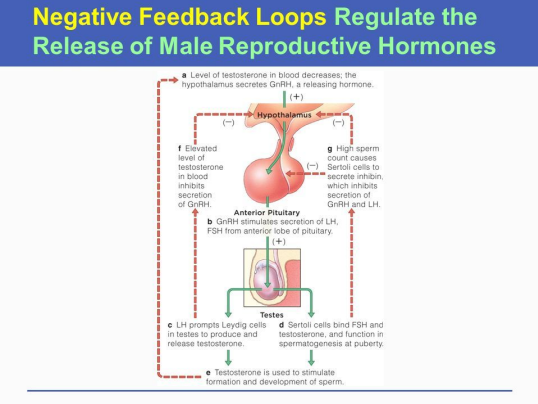 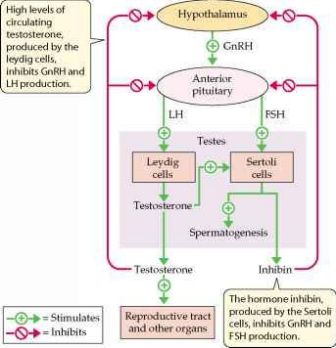 Don't forget about the age old question of What is asset?

Make predictions about the effects of disturbing parts of the male reproductive systems.

● The release of GnRH would not be inhibited

● Without the receptors, testosterone cannot have an affect

on the cells in the hypothalamus or in the pituitary, so

testosterone CANNOT inhibit the release of GnRH or

LH (FSH can still be inhibited because inhibin receptors

Be able to sketch a picture of the structure of reproductive anatomy for males, including the following parts: seminiferous tubules, epididymis, vas deferens, penis, testicles. 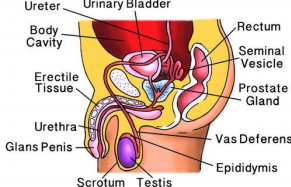 If you want to learn more check out what are The World System?

● Cross-section of the testis 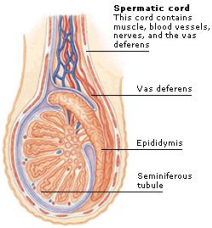 If you want to learn more check out What is pyrimidines?

Explain the role of Sertoli and Leydig cells in sperm production, including their structure and how hormones interact with these cell types

● Sertoli cells: facilitates spermatogenesis (sperm production) ○ Structure: if you do a cross-section of the seminiferous tubule, then each “pie slice” you see would be a sertoli cell

○ Structure: if you do a cross-section of the seminiferous tubule, then the “pink ovals” would be a leydig cell 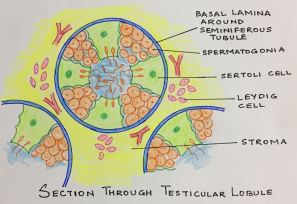 ○ LH binds to its receptor on leydig cells and stimulates the production and secretion of androgens (male hormone, such as testosterone) ■ Androgens also bind to receptors in the nuclei of sertoli cells and thereby also weakly stimulate spermatogenesis

● Binding of FSH to its receptor increases expression of the androgen receptors, so spermatogenesis is thus strongly stimulated (strong if both hormones are present) 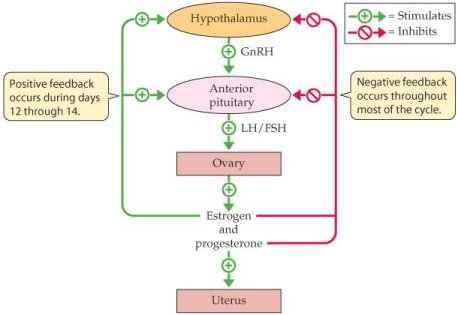 Recognize and be able to explain the order of events in hormonal regulation of female reproduction.

○ Ovaries produce an egg that can be fertilized

○ This cycle governs the ovary, including the release of an egg ○ The cycle is regulated by hormones secreted by the hypothalamus and the pituitary gland

■ Hormones produced by the ovaries circulate in the blood, and regulate the uterine cycle

○ The uterus creates a hospitable environment for an embryo

○ This cycle governs the preparation and maintenance of the uterine lining

■ Secretory phase: continue to build up lining OR it disintegrates ● REMEMBER!!!! The menstrual cycle and menstruation (period) are NOT the same thing!!!!!!!!!!!

● These cycles occur at the SAME time

● Just remember the functions of the hormones!! (the concept map above can help you out)

Be able to sketch a picture of the structure of reproductive anatomy for females, including the

Differentiate between what occurs in the female reproductive cycle when an egg is fertilized versus when it is not fertilized.

● When fertilization does not occur…

● When fertilization does occur…

○ Progesterone and estrogen maintains the uterine lining (these hormones are produced by the corpus luteum; they promote

thickening of endometrium, which allows for a fetus to grow in) !

Create an accurate explanation for a non-biologist about how at-home pregnancy tests work and when you can expect to see a positive result if you are pregnant. ● Hormone hCG is produced by the implanted embryo

○ hCG is secreted through the urine, which is why pregnancy tests can detect whether a female is pregnant or not

● Take it continuously (with hormonal and sugar pills)

○ Three weeks of the pill contains these hormones

○ One week of the pill does NOT contain any hormones

○ In these cases, most women end up with no menstruation (it appears if they stop taking the pills)

○ Menstruation (or period) is not necessary, so doctors say it’s safe ! 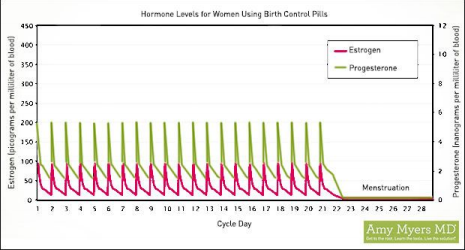 Be able to use the “calendar” method to predict ovulation, when menstruation will occur, and to plan for (or to avoid) pregnancy

● To plan for (or to avoid) pregnancy, you will need to know many factors such as…

○ day of ovulation (most women have cycles somewhere between 21 and 35 days; the follicular phase varies from female to female, but the luteal phase is more consistent, so generally, you would subtract 14 days from the length of the whole cycle to determine the day of ovulation)

● Male and female should have sex (if avoiding pregnancy, least risk) ○ 3-5 days before ovulation

○ After 24 hours have passed after ovulation

Describe types of contraception and rank their effectiveness under typical use conditions, including implants, condoms, pills, ring and patch, IUDs, sterilization, withdrawal, and calendar method.

○ Vasectomy can often be reversed

■ Can lighten or even eliminate periods

■ May increase bleeding and cramps

■ Won’t change regularity of your period

○ Takes over production of estrogen and progesterone from corpus luteum

■ From the pool of blood, the blood exits and goes back into the mother’s bloodstream

■ This blood flows into capillaries, and after the blood circulates through the capillaries, it goes back into the umbilical cord

● Mother and fetus can affect each other’s health because the placenta contains both maternal and fetal tissue, which allows beneficial substances (such as oxygen, nutrients, and hormones) as well as harmful substances (wastes/ carbon dioxide) to pass between mother and fetus.

Draw a model of the labor positive feedback loop

○ Stimulates hypothalamus to stimulate pituitary, which triggers more oxytocin to be released (and the cycle continues and intensifies until the baby is born, which ends the loop)

Differentiate between hormone levels before and after birth

What is consumption smoothing?

What Does it Mean to Be a Leader?