What are the three basic categories of political science and comparati

What are the three basic categories of political science and comparati

What are the three basic categories of political science and comparative politics?

­ Comparative politics: the study and comparison of domestic politics

­ International relations: study the relation in between countries

­ Methods (ways to study and test those theory)

­ Ideals (beliefs and values about preferred outcomes) If you want to learn more check out What are the stages of the buyer decision process?

­ Institutions: organizations or activities that are self­perpetuating and valued for their own  sake

What is the difference between presidential and parliamentary systems?

­ Defining and shaping what is possible and probable in political life by laying out  the rules, norms, and structure in which we live  We also discuss several other topics like What are the titles of ada?

­ Freedom is an individual’s ability to react independently

­ A material standard of living shared by individuals within a community,  society, or country

­ Politics: struggle in any group for power that will give one or more persons the ability to  make decisions for large group

­ Who gets what, how, and why? We also discuss several other topics like When was georgia farm bureau established?

­ Who: countries to get power

­ What: attaining using power, to have influence over others (Natural

What is export oriented industry mean?

● A larger role for the state = greater focus on collective equality

● A smaller role for the state = less focus on collective equality

­ How: operation (election and protest)

­ Why: looking for patterns to make statement anticipate on future event ­ Power: ability to influence others or impose one’s will on them

­ Politics is the competition for public power, and power is the ability to extend  one’s will

­ Comparative method: a way to compare cases and draw conclusions

­ Inductive reasoning: the means by which we go down study a case to generating a hypothesis

­ Deductive reasoning: starting with a puzzle and from there generating some  hypothesis about case and effect to test against a number of cases

­ X ­> Y Don't forget about the age old question of What is the difference between a coroner and a medical examiner?

­ Evaluating research: make clear relationships and why they exist

­ What are the sources?

­ How was the evidence collected?

­ “Importance” of the issue

­ To other points in time Don't forget about the age old question of What did watson and crick discover in 1953?

­ Cultural: to one country? Or universally use?

­ State: the political institutions of a country that create and implement policy and resolve  conflict

­ Regime (programming): long­term goals that guide the state with regard to individual  freedom and collective equality. Norms and rules regarding We also discuss several other topics like What are the things that may affect the ecology?

­  Government (machine): specific leaders who govern a country and are in charge of the  state at a particular point in time 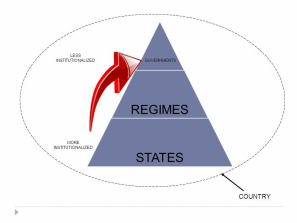 ­ Legislature（（（（（（: people recognize and accept something or  someone as right and proper

­ What do states do?

­ Larger role for some states

­ Fukuyama: “The Imperative of State­Building) 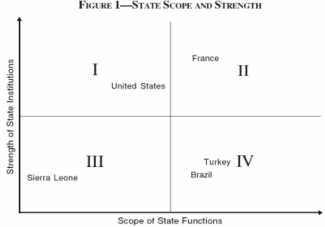 ­ No clear consensus on what states should do

­ Weak ties between state and society

­ Why does it matter?

­ Democracy: political power exercised either directly or indirectly through participation,  competition and liverity

● In a PR system, parties can win seats in the legislature who winning a single district ­ Which is the more democratic system?

­ You know who your representative is

­ Leads to a two­party system

­ More equal distribution of seats based on public

­ What rights should democracy guarantee?

­ Rule of law a necessity

­ President serves as both head of state and government—no prime minister ­ Powerful, and cannot be removed other than by impeachment or election ­ Which is the more democratic system?

­ Benefits of a parliamentary system

­ Danger of too much power for majority party

­ Benefits of a presidential system

­ Few constraints once in office

­ May ignore public opinion and other branches of government

● In a parliamentary system, the prime minister must control the majority of seats in the  legislature

­ Schmitter and Karl, “What Democracy is not”

­ Consist in many forms, depends upon a country’s socio economic  condition and it entrenched state structure and policy practices

­ Depended upon the presence of rulers and public realm.

­ Elections should be fairly conducted and honestly counted; only ask  citizens to choose highly aggregated alternatives offered by political

­ Representations, do most of the real work

­ Democracy is different in

­ More actors must be consulted

­ Not necessarily more stable or governable

­ Byproduct of democratic freedom of expression, but it is also a

reflection of the likelihood of continuing disagreement over new

­ More open societies and politics than the autocracies they place, but not  necessarily more open economies

­ Tension between democracies and capitalism

­ Freedom of Expression and Belief

­ Or electoral/liberal democracies that fall short

­ Lack of electoral or liberal democracy

­ Should all countries be democratic?

­ Rule by one or more military officials, often brought to power through a  coup d’etat

­ What keeps authoritarian regimes in power?

● The authoritarian regimes can be legitimate

­ Levitsky and Way, “The Rise of Competitive Authoritarianism”

­ Treated as incomplete or transitional forms of democracy

­ Distinguished from democracy on the one hand and full­scale

authoritarianism on the other

­ The electoral arena: not exist or are not seriously contested in

­ The legislative arena: not exist or are thoroughly controlled by ruling party in authoritarian, relative weak in competitive authoritarian

­ The judicial arena: governments in competitive authoritarian regimes  routinely attempt to subordinate the judiciary, by impeachment

­ The media: state owned, yet independent media is a critical role to

authoritarian, soft pressure are put on them)

­ Constructivism: We are socialized into a nation

­ Primordialism: We are born into a nation

­ Nationalism is a political principle holding that territorial boundaries of state  should be congruent to the boundaries of nation. (Ernest Gellner)

­ The ideal outcome is a ‘nation­state’ – a state that encompasses only one  dominant nation that it claims to embody and represent.

­ May lead to secession, irredentism, violence

­ To achieve global success of nationalism

­ Far from being a nativist remnant from the dark, unenlightened past, nationalism  is characteristically modern phenomenon.

­ And despite many predictions to the contrary, it is not showing signs of decline. ­ It has good sides (promotes popular sovereignty) and bad sides (creates divisions,  and potentially violence)

­ Can be managed institutionally. Sometimes.

­ McGarry and O’Leary, “The political regulation of ethnic conflict”

­ Scots: the nationalism rarely been reflected in movements,

demonstrations, or calls to action but “emptiness”

­ Independent from the state

­ Act in the public sphere

­ Quality of government depends not only on the state and its officials, but society  as well. 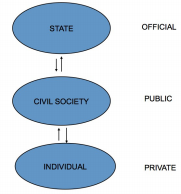 ● Republic party is not a civil society

­ Academic studies in other countries

­ Overlooks other types of social organizations

­ Dark side of social capital

­ Movement of women into the labor force

­ Mobility: the “repotting” hypothesis – discussion on homeownership ­ Other demographic transformations 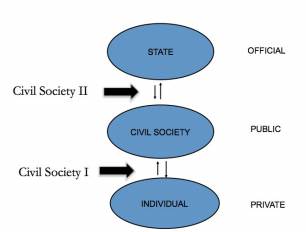 ­ Sato, “What makes a social movement”

­ Reflect collective action usually manifested through organized protest, and  influence or effect some change in society (do not need to be progressive)

­ Collective enterprises to establish a new order of life

­ Powerful and internalized beliefs and values held by individual

­ The outside­in or Global approach 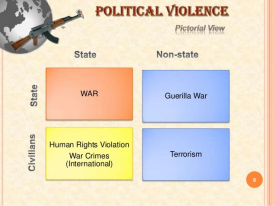 ­ “A revolution is not a dinner party”

­ Institutions that link politics and economics

­ Who pays for public goods and social expenditures

­ Taxation varies in who is taxed

­ Taxation varies in how much is taxed

­ Best state is a limited and small one

­ Greater tolerance for inequality and poverty

­ Accepts private property and markets, but seeks to regulate

­ Many European countries fall into this category

­ More public goods than in liberalism—less tolerance for inequality, poverty ­ Trade and competition under state management

­ Acemoglu and Robinson, “Why Nations Fail”

­ Mercantilism: a political­economic system in which national economic  power is key;the domestic economy is an instrument to serve the state.

­ Political: How to build state capacity and autonomy?

­ Economic: How to develop? Which economic policies?

­ Alexander Gerschenkron (1962): Are early and late industrializers the same? ­ Need to catch up to rich countries

­ Pace of growth is faster

­ Scale of development is larger

­ A strategy for economic growth in which a country restricts

imports in order to spur demand for locally produced goods

­ Growth of domestic industries to

­ A strategy for economic growth in which a country seeks out

technologies and develops industries focused specifically on the

­ Why choose a strategy

­ Lessen dependence on US

­ US encouraged them to industrialize

­ Limitations in each system

­ Democracy promotion as a foreign­political issue

­ Bring down old regimes than stabilize new ones

­ The Emergence of Democracy

­ Structure of House of Commons 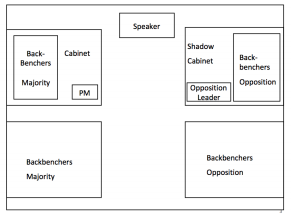 ­ No checks and balances

● The liberal democrats prefers a PR

­ Moderates: public welfare, but within limits

­ Popular with Labour activists, not with public

­ Growth of middle and working class

­ Democracy in Germany after 1945, A Success Story (Second Wave) ­ Learning from Weimar and the Nazi­regime

● Germany’s electoral system is both plurality and PR

● In Post­WWII Germany, all governments have been coalition ­ Political system I: Bundestag (lower house)

­ “Constructive” vote of no confidence

­ Fusion of executive and legislative power in Bundestag

● Angela Merkel is leader of CDU/CSU

­ According to population, states recieve 3­6 seats

­ Democratic institutions can be successful despite undemocratic history ­ The chancellor

­ Guides own party and coalition in Bundestag

­ Challenges facing the UK: why did Brexit happen?

­ UK economy: growth of London as financial centre, decline in

­ Everyone wants tighter union, except the UK

­ 2010: coalition government between Tories and Liberal Democrats ­ 2011: pressure growing on Cameron to have a referendum

­ Agrees to referendum IF re­elected

­ Message of immigration, sovereignty and welfare

after the 2008 Financial Crisis)

­ Backed by “establishment”, led by Cameron

­ financial costs to households for leaving

­ No vote for how to leave

­ No vote for what kind of relationship with the EU

­ Legally binding? What about Parliament?

­ Article 50 of the Lisbon Treaty

­ State responsible to enact: who does that mean?

­ Soft/hard Brexit (Matthijs): could leave without a deal (hard, or  “Canada­plus”), or with some elements of what we already have (soft, or  “Norway­minus”)

­ In reality, neither of these options is on the table

­ No hard border for Northern Ireland

­ But much to be decided

­ Parliament to get final say in deal

­ London as financial capital under threat?

­ UK will still be prosperous

­ Can negotiate with new partners

­ It is the leading country in EU welcoming refugees

­ Germany’s sense of self (hummanitarian)

­ Outcome was not inevitable (Thompson), but all made the Brexit vote more possible: ­ Deep­seated euroscepticism

Gross profit margin refers to what?