Description: This study guide covers all of Exam 2 material and goes over a lot of practice problems that will be extremely helpful for the exam.

Equations to know how to use​ (a lot, but most are similar and easy to understand): 1. Fnet = ma

What is a long-range force?

What is a mass?

Force- Acts on an object

Agent- Something that exerts a force

Long Range Force- Forces acting on each other without physical contact Force Examples: Don't forget about the age old question of example of cultural particulars 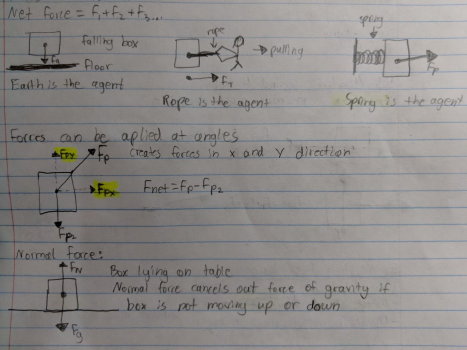 1. Object at rest, stays at rest unless acted upon by an outside Force

2. Object in motion, stays in motion unless acted upon by an outside Force

*Objects accelerations do not change unless a new force is added

Inertial Reference Frame- When Fnet = 0 an object is an inertial reference frame, because it is not accelerating 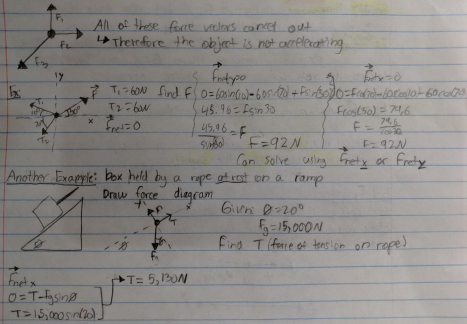 The forces acting on an object determine its acceleration

We can use this and our past knowledge from other chapters to solve for Vffrom Vi and Fnet Examples ​(next page):

Mass is unchanging (mass = how much “stuff is in an object”)

*Gravity gets weaker as distance increases

Gravity on an object on Earth = FEarth = mg (straight down)

*Something will weigh more while accelerating up (in an elevator), but mass will stay the same

1. Force on an object that keeps it from moving

2. Matches a force trying to move an object, until it is overcome 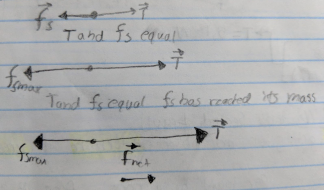 6.5 Drag ​(not important subchapter, but just know what the formula means): Drag Coefficient- Tells how strong of a force is going against motion

Fd = -½CpAv2in the direction opposite of motion

A = Area of object 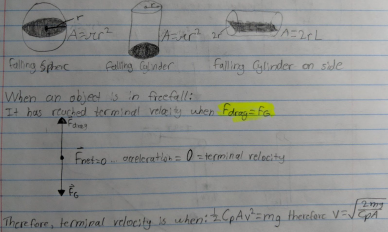 Any time an object, A, pushed or pulls on another object, B, then that object, B, pushes or pulls back on A

Every force is part of an action reaction pair:

-Earth pulls down on you

-You pull up on the Earth 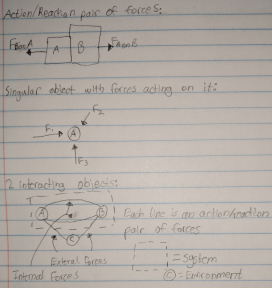 *When walking, what force makes you move forward?

Ans:​ The Earth pushing forward against you (because you push back on it) 7.3-Newton’s Third Law:

-These two Forces are in opposite directions

The Earth pulls down on you, and you pull up on the Earth with equal Force Thought Question:

A car is pushing a truck. The mass of the truck is much larger than the mass of the car. What can be said about the forces between the two?

7.4-Ropes and Pulleys​ (many practice problems):

Tension Forces- in ropes is causing by the stretching of their “spring-like molecular bonds” -Don’t remember that...it’s useless

-Just know Tension is a force applied by a rope or pulley!!!

Practice Problems​ (next page and answers follow picture or are in picture):

Ans:​ Equal to (both ropes experience a force of tension equal to mg)

A Rocket Launching upwards with wind pushing it. How far does the wind push it? Rocket Mass = 30 kg

How will this Force affect the object’s momentum: 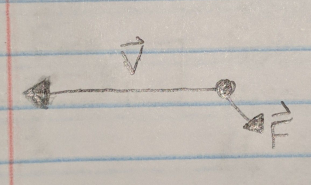 Ans:​ It slows down, and curves downward

That is an old equation, but now we have to know how forces cause this acceleration Therefore we can say:

Example of Formula Use​ (picture on next page):

Question: A father puts his 20 kg child in a 5 kg cart, and swings him with a 2 meter rope creating a tension of 100 N. What is the RPM of the cart?

What is the maximum speed a 1,500 kg car can make a left turn around a curve of 50 m without sliding? (Static friction coefficient is 1)

A highway curve of radius 70 m is banked at an angle of 15 degrees. At what speed can a car take this bank without assistance from friction?

A Stone Age hunter swings a 1 kg rock around his head with a 1 m rope. If the rope breaks at a Tension of 200 N, what is the max angular speed, in rpm, he can swing the rock?

Objects are in Nonuniform Circular Motion when they are following a circular path, and its speed is changing

A 1,500 kg car is going around a 25 m radius track, starting from rest. The wheels supply a constant 525 N Force in the forward direction. The coefficient of static friction between the tires and road is 0.9. How many revolutions have been made when the car slides off the track?