CONCORDIA UNIVERSITY / Geography / GEOG 203 / What are the types of harvesting?

Description: Study Guide for the second exam. Do not forget to look at the PDFs on Moodle as well!

50% of the boreal forest is allocated to industry and open to harvesting. They have the highest  rates of increase in forest­cover loss globally.

What is the purpose of the james bay project?

2 Complementary. NFTPs and timber extracted from the same land base in non conflicting ways.

One of the most controversial issues in Canadian forestry: rate of conversion of natural to  managed forests. Provinces have an annual allowable cut (AAC), which should reflect the long range sustained yield (LRSY) of a given unit of land. This is limited by the growth conditions,  the biological potential of the site and how that potential can be augmented by silvicultural  practices. It is not sustainable to have an AAC that exceeds the biological potential, however,  economists encourage maximizing monetary returns of the first cut in order to invest in other  wealth­producing programs.

What is hydrological cycle?

Don't forget about the age old question of What are hedonic needs?

Change in species and age distributions arising from forest management practices ahs a major  impact on ecological processes such as energy flows, biogeochemical cycles and the  hydrological cycle, and the habitat for other species.

Difference between disturbance through forestry and natural processes: natural disturbances  (fire, insect attack) do not result in the physical removal of the biomass from the site, consistent  wit the law of conservation of matter. On the other hand, logging results in physical translocation of nutrients from the site. The closer that forest harvesting approximates the conditions of natural perturbations, the less disturbing it will be for the ecosystem. Don't forget about the age old question of What strategies can get information from working memory into long term memory?

The natural viability of forests is reduced when they are replaced by plantations. The impact of  clear­cuts on biodiversity can be reduced by keeping them small, with irregular edges and  retained forest patches within the clear­cut. Once they start regenerating, species diversity  increases rapidly and usually results in a plant community that is more species­rich and diverse  than the harvested community. This does not happen where an area has to be replanted since it  involves a few number of species.

∙ Annual allowable cut (AAC): Based on the theoretical annual increment of merchantable  timber, after taking into account factors such as quantity and quality of species,  accessibility and growth rates, and amounts of land protected from harvesting because of  other use values.

∙ Borealis: of the North. Applied to many northern phenomena.  If you want to learn more check out What is the main purpose of taxation?

∙ Global Intact Forest (IFLs): Landscapes large enough to retain native biodiversity which  contain no signs of fragmentation by logging and infrastructure. We also discuss several other topics like What factors in britain and in the colonies made people indenture themselves?

∙ Silviculture: Practice of directing the establishment, composition, growth, and quality of  forests stands through a variety of activities, including harvesting, reforestation, and site  preparation. 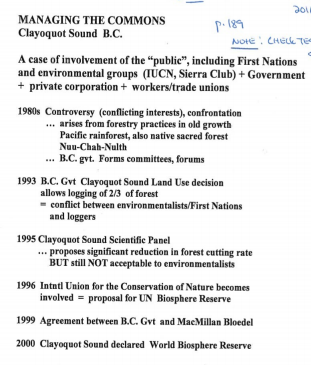 Hydrological Cycle in Canada: About 12 per cent is covered by lakes and rivers (groundwater is their key source). Various types of wetlands, all being hybrid aquatic and terrestrial systems, cover 14 per cent of Canada. Canada ranks between third and sixth in terms of renewable water supply (RWS). We also discuss several other topics like What is physiological psychology?

Diversion of water is completed because:

1. It increases water supplies for a given community

2. It deflects watercourses away from areas to be protected ex: from flooding

3. It enhances the capacity of a river so that it can be used to support activities ex: floating  logs or passage of ships

4. It combines or consolidates water flows from several sources into one channel or route in  order to facilitate hydroelectric generation

Governments and private corporations have pursued many megaprojects in Canada to meet  energy demands, and virtually every region in the country has experienced such megaprojects.  One that has garnered a great deal of national and international attention is the James Bay Project in Quebec.

What it is: A hydroelectric megaproject in northern Quebec, begun in the 1970s, that has  involved extensive dams on the La Grande and other rivers and has flooded thousands of square  kilometers of the James Bay Cree homeland. Proposed by Premier Robert Bourassa

Problems: The energy taken from rivers in a 350 000 km2 area of Quebec was the homeland of  around 10 000 Cree and Inuit people. Also, two major diversions channeled water into La  Grande basin and doubled the natural flow of the river.

When constructed, problems with: drinking water quality, maintaining traditional hunting  activity, increased erosion along the banks of La Grande, alcohol abuse brought by contact with  other communities through newly built road, high levels of mercury in fish caught in the  reservoirs or connecting rivers (by 1985 the Cree stopped fishing in the LG2 area).

November 11 1975. Agreement is the outcome of the Cree people’s fight against the  hydroelectric megaproject. Approved by gov of Canada and Quebec’s national assembly.  Includes provisions for environmental and social impact assessment for future developments,  monetary compensation, economic and social development, and income security for Cree hunters and trappers.

1986: Cree agree to completion of developments in La Grande basin but oppose the projects in  other basins.

A central concern in water management is to ensure a sufficient quantity of water of  adequate quality for human use. Current per capita water use extends from as little as 20 liters to  more than 500 liters each day. The minimum water requirement to replace loss of fluid for a  normal healthy adult in an average temperate climate is about 3 liters each day.

Canada: among the world’s highest per capita water users. 2009 lowest provincial use: Prince  Edward Island with 189 L per capita a day, highest is Newfoundland and Labrador at 395 L per  capita a day. Most Canadians use municipal water treatment but a significant number depend on  private wells or other arrangements from ground water.

Canadians realized their water system was not permeable to failure when a population of 5 000  experienced contamination of its water supply system by the deadly bacteria E. coli. 7 dead,  2300 ill.

∙ Hydrological cycle: Water or aquatic resources are one component of a system  that includes that atmosphere, cryosphere, biosphere and terrestrial components.  More details p.367

∙ Multi­barrier approach: Series of measures, each independently acting as a barrier to passing water­borne contaminants through the system to consumers. Failure in  a barrier will not cause entire failure.

Read­Study word documents and PDFs on Moodle and course reserves

What are the effects of separating twins at birth?