Course: Human Anatomy and Physiology I

a. Bio­: “life, biology, or biological, pertaining to living organisms”

o from the Greek bios, "one's life, course or way of living, lifetime" b. Anatomy: “a cutting up” (dissection) ­ structure

1. The basic approach in A&P is summed up by the questions: We also discuss several other topics like What are the freedoms guaranteed by the 1st amendment?

2. Anatomical position of the human body

­ Standing upright with its arms and legs straight down and palms, face, and

what are the two main body cavities of the human trunk?

∙ A standard frame of reference for the description and orientation of

I. Composed of one or more cell

V. Growth and development – an increase in size and physical maturation VI. Reproduction Don't forget about the age old question of smant

VII. Metabolism (the synthesis and breakdown of large molecules for energy) 4. The four “basic processes that support the demands of living organisms”: I. Respiration: brings/inhales oxygen from the environment into the

cardiovascular system, removes/exhales carbon dioxide as waste. II. Circulation: the distribution of oxygen, cellular waste, and the products of

what do ribosomes do?

We also discuss several other topics like Why is crystallized intelligence important?

digestion through the cardiovascular and lymphatic systems.

III. Digestion: the process of taking food and breaking it into simpler

substances the body can absorb to maintain cells and generate energy. IV. Excretion: to maintain homeostasis, wastes, leftovers, and toxic

byproducts of metabolism are removed through the respiratory, digestive,

­ For example, the jaw is on a hinge, allowing it to go up and down for the  If you want to learn more check out Why are some defenses induced and some constitutive?
We also discuss several other topics like 1101 numerology

7. Six levels of organization in the human body

V. Organ system: a collection of organs working together (e.g. the endocrine

VI. Organism: a collection of organ systems working together to support life

8. How many cells and types of cells are there? If you want to learn more check out bio 369 study guide

­ There are tens of trillions and 200 different types of cells in the human body. 9. Four main types of tissue:

I. Integumentary: protects against the environment, controls body

­ Maintaining a steady internal environment state in a range, and the

12. What are the three parts to a homeostatic regulator mechanism, or feedback

from the receptor)➝ Effector (responds by opposing/enhancing the stimulus) 13. Explain a negative feedback loop (NFL).

­ In an NFL, homeostasis is re­established to the desired range without  needing to solve the stimuli. The receptor, or nerves, receive a signal,  sending information to the central nervous system (the brain and spinal cord)  where it is processed. The CNS then sends commands to the effectors  (signal ➝ tissue), which act in opposition to the stimulus (e.g. sweating in hot

o This is the ideal loop for homeostasis.

­ PFLs accelerate to completion and take the body away from homeostasis  as it must to remove or correct the original stimulus. In a PFL, the effector

amplifies the stimuli instead of working against it.

o For instance, if your blood vessel is punctured, chemicals are released  to signal platelets. Clotting forms and continues to release chemicals,

accelerating the process until the bleeding stops completely.

q. Popliteal (back of the knee, popliteus)

16. Clinicians separate and simplify the abdominopelvic region into four quadrants to

find the causes of illness:

specificity and organ location and direction.

17. Directional terms are used to locate parts of the body in relation to each other. Superficial: at or relatively close to the surface of the body

Deep: toward the interior of the body; farther from the surface

Superior: above, toward the head

Inferior: below, toward the feet

Cranial, or Cephalic: toward the head

Caudal: toward the coccyx (tail, bottom)

Anterior, or Ventral: the front of the body

Posterior, or Dorsal: the back of the body

Lateral: away from the midline

Medial: toward the midline

Proximal: toward the point of attachment of a limb to the trunk

Distal: away from the point of attachment of a limb to the trunk

posterior half) – front and back

III. Transverse, or horizontal, plane (cuts the body so there is a superior and

an inferior half) – top and bottom

19. There are two main body cavities of the human trunk:

o Contains the lungs and the heart within three subdivisions

o Contains the many digestive glands and organs, urinary bladder, and

1. Cells are bound by a cell membrane made up of a phospholipid bilayer. 2. Identify the following structures: 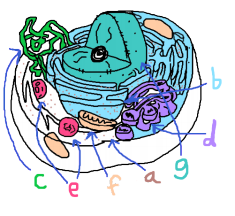 3. The phospholipid bilayer consists of:

o Inters with cytosol and

o Separates the cytoplasm from the extracellular fluid.

head and nonpolar tail of the bilayer.

4. Difference between integral and peripheral proteins:

­ Integral proteins are vital parts of the cell membrane (most are

transmembrane) and cannot be removed without causing damage. ­ Peripheral proteins are bound to the surface and easily separated. 5. Functions of the…

a. Proteoglycan: a large molecule (aggrecan) made up of proteins and

I. Anchoring: attaches the plasma membranes to extracellular

III. Enzyme: a catalyst (can be integral or peripheral).

V. Carrier: binds and transports solutes through the cell.

VI. Channel: a pore/protein that permits water and small solutes

through the cell membrane.

7. What are microvilli and cilia?

­ Cilla are the same, except they move.

8. Mucociliary transport moves mucus out of our respiratory systems. ­ The cilia of epithelial cells pick up bacteria and carries it out of the

trachea and lungs, moving it toward the throat to be swallowed or spat. ­ Toxins from smoking slowly damage and can eventually kill cilia,

shape, and binds the cytoskeleton to the membrane

b. terminal web: a layer of microfilaments at the cell’s surface c. intermediate filaments: the strongest element; provides strength and

move materials through the cytoplasm

10.  When are centrioles most active?

­ Centrioles are groups of microtubules, and they are most active during

­ Ribosomes are complex cellular machines that synthesize protein from

­ There are two types of ribosomes:

­ The ER is continuous with the nuclear envelope, surrounding the

o Rough ER chemically modifies and packages proteins to export  them to the Golgi apparatus, requiring fixed ribosomes to its double

13.  How do transport vesicles move throughout the cell?

­ Transport vesicles use motor proteins and move along the

14.  Describe the Golgi apparatus (the “post office” of the cell). ­ An organelle made of flattened discs (cisternae) with three functions: I. Renew/modify the plasma membrane

II. Package hormones and enzymes for release outside the cell III. Package enzymes within vesicles (lysosomes) for the cytosol ­ Has two parts:

o The cis side (receiving side), where transport vesicles bring some

o The trans face (shipping side), where the product can be sent to  one of three places (the membrane renewal vesicles, secretory  vesicles, or lysosomes).

­ The lysosome has three basic functions, all to breakdown organic  molecules or organelles. It does this via enzymes and toxic chemicals

within a vesicle to keep from damaging the rest of the cell.

I. Removal of damaged organelles: the lysosome fuses with another

organelle’s membrane and activates the enzymes.

II. Destruction of foreign material: the lysosome fuses with a vesicle

III. Autolysis: the lysosome membrane breaks down following the injury or death of the cell and releases its digestive enzymes upon the

­ Lysosomes are made when endosomes that fuse with vesicles of the

­ The powerhouse of the cell, generating about 95% of the ATP it needs

­ Like the nucleus, has a double membrane and contains its own DNA

(known as mtDNA) and ribosomes.

17.  Describe the functions of:

a. The nucleus: the control center for cellular homeostasis.

o  Controls communication between the cytoplasm and nucleus o  Stores the genetic information of the cell, instructions for

 When not dividing, nucleosomes are and form a filament

holding the two strands together at the centromere.

o  A nuclear organelle that synthesizes the ribosomal RNA

­ A functional unit of heredity. It contains the DNA nucleotides necessary

19.  What is the relationship between nucleotides, codons, and amino acids? ­ Nucleotides are the subunits (monomers) of DNA and RNA. ­ Codons are triplets of RNA nucleotides that code for specific amino

acids, which form the polypeptide chains of proteins.

20.  How does DNA in the nucleus get unzipped for replication? ­ A helicase enzyme.

­ The synthesis of RNA from a DNA template

­ mRNA leaves through a nuclear pore for the cytoplasm

­ Building polypeptides from an mRNA strand

­ tRNA anticodon pairs to the triplet code of the mRNA

­ The polypeptide is released as a functional protein into the cell 23.  The phospholipid bilayer has selective permeability.

a. Hypertonic (more solute outside the membrane): the blood cell

shrivels as water leaves for the area of higher solute.

b. Hypotonic (less solute outside the membrane): the blood cell bursts

as water enters it rapidly.

­ A form of passive transport

plasma membrane down its concentration gradient

27.  What’s the difference between a symporter and a countertransporter? ­ Symporter: an integral membrane protein that moves two or more

different molecules across the membrane in the same direction. ­ Countertransporter: does the same as the symporter but moves the

molecules in opposite directions.

­ Passive facilitated transport doesn’t require ATP to move along the

­ Active facilitated transport requires ATP to move it against its

Endocytosis: a substance enters a cell without passing through the cell

30.  What’s the difference between a tumor and cancer?

­ Cancer is an illness that consists of mutations – permanent DNA  changes that disrupt the regular rate of cell division.

­ A tumor (neoplasm) is a mass that results from abnormal cell division.  These can be benign, meaning it doesn’t threaten life and can be  surgically removed.

a __________ is a specialized cell responsible for converting external stimuli into neural activity for a specific sensory system.