Description: This study guide goes over the first four chapters that we went over in class in prep for the first exam on Thursday

Chapter One: Biology & the Tree of Life

○ Cells- the smallest structural and functional unit of an organism

○ In short, cell theory is the historic scientific theory, now universally accepted, that living organisms are made up of cells

○ Like most theories, many scientists discovered small parts in order to prove the accuracy of the overall theory

Why do unstable isotopes happen?

Don't forget about the age old question of What is the function of marketing cost analysis?

compartments separated from their environment with a membrane

■ Rudolph Virchow proposed, in 1858, that cells come from cells that

○ The cell theory challenged the old way of thinking, which was that organisms could arise spontaneously under certain conditions

● The Experiment to Answer the Question of Theory

○ Louis Pasteur wanted to determine whether organisms could arise spontaneously in a nutrient broth. He tested this by having two different flasks with the broth. One made it easy for external particles to enter the flask and the other trapped them in a long ‘swan-necked’ top to the flask.

Don't forget about the age old question of Archaeology is the study of what?

■ Example: Cell division was confirmed when a woman gets pregnant. What starts off as a couple bundles of cells grows and blossoms into a human that is full of trillions of cells.

○ Evolution is defined as the process by which different kinds of living organisms are thought to have developed and diversified from earlier forms during the history of the earth.

■ Species are related by common ancestry

■ The characteristics of species can be modified from generation to We also discuss several other topics like What are the resonance structures for some ions and molecules?

● This is where natural selection comes in!

○ Natural selection is defined as the process where organisms

better adapt to their environment to survive and produce

○ An example would be a bird with an odd shaped beak. If

doesn’t allow them to eat well.

● The Tree of Life

If you want to learn more check out How human physiology works?

○ The Tree of Life is best explained in a diagram. Here you can see the three categories: Bacteria, Archaea, and Eukaryotes. This brings us through the evolutionary history. This type of diagram is called a phylogenetic tree!

● Composition of air is a considered to be a mixture

○ Matter has mass and occupies space We also discuss several other topics like What is”snipped” during vasectomy?

○ All matter is composed of atoms

○ Most of the atom is empty

○ Chemical Symbols are all individual and unique

○ Ions are atoms that are charged particles

○ There are stable and unstable isotopesDon't forget about the age old question of What do you eat on a vegetarian diet?

■ Why do unstable isotopes happen?

● “Usually, what makes an isotope unstable is the large nucleus. If a

nucleus becomes larger enough from the number of neutrons it will

order to achieve stability. This gives it the ability to be highly

○ Energy levels work as limits to each ring of possible electrons

○ On the visual below you see the numbers on top, those represent how many electrons can go onto that particular level

● Amino Acids and Their Polymerization

○ Amino Acids have a certain carbon bonded to an amino group, a hydrogen atom, a carboxyl group, and an R-group

○ In proteins, amino acids are joined by a peptide bond between the carboxyl group of one amino acid and the amino group of another amino acid

○ In many cases a complete protein consists of several different polypeptides, bonded together. The combination of polypeptides represents the protein’s quaternary structure.

○ Interactions that take place between C=O and N-H groups in the same peptide-bonded backbone create secondary structures, which are stabilized by hydrogen bonding

○ Catalysis takes place at the enzyme’s active site, which has unique chemical properties and a distinctive size and shape that is specific to its substrates ■ Catalysis- the acceleration of a chemical reaction by a substance that

increases the rate of a chemical reaction without itself undergoing any

■ Substrates- the substance on which an enzyme acts

B. Complementary Base Pairing

○ Purines are a substituted derivative of this, especially the bases adenine and guanine present in DNA and RNA

○ Pyrimidines are a substituted derivative of this, especially the bases thymine and cytosine present in DNA

○ There are strands and a backbone, these are held together by hydrogen bonds ■ Strands run anti-parallel

○ There are two types: 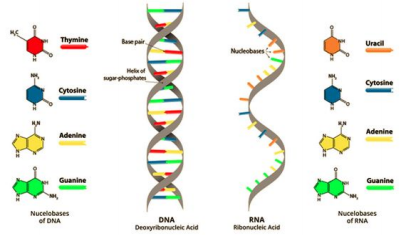 ○ Nucleotide Monomers are linked together by phosphodiester bonds

■ Phosphate group is bonded to 5’ carbon of sugar

■ A nitrogenous base that is bonded to 1’ carbon of sugar

● What are the differences between DNA and RNA?

*Nucleic Acids have a sugar-phosphate backbone*

■ Two purines ARE NOT parallel

■ Two pyrimidines ARE NOT parallel

○ Complementary base pairs are broken

○ ATP is the energy carrying molecule of all living organisms

○ Incredibly important and no cellular work could be done without this! ● RNA is special!

○ RNA is not restricted to a helix

○ It also contains “U” instead of “T”

What are the 5 stages of growth and development?

What is meant by beyond reasonable doubt?