Description: These are the Week 5 Notes 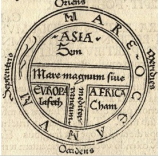 o Orions is the Latin word for east.

o Occidens is the Latin word for west.

o The other two words in the map is the Latin for sea and ocean. o Circle represents infinity (beginning or the end).

o These types of maps became very popular before the Roman  Emperors.

o Monks drew these maps and the purpose of them drawing the maps  was not to help with navigation but to show their sole purpose to God. ∙ Mappa Mundi (Maps of the World)

What is the latin word for west? 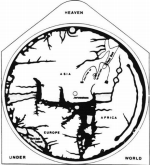 Don't forget about the age old question of What is the definition of proximal stimulus?

What is the english word for mappa mundi?

o Ancient Egypt was typically divided into two parts: east and west. The  west part had the cemeteries showing the theoretical symbolism of the association of sun dying in the west. 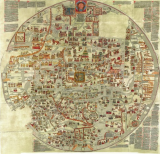 If you want to learn more check out What is the definition of lambda?

o This map shows that Christ is covering the whole world (Christ’s head,  toes and hands are shown in the extremities of the map).

o The Garden of Eden surrounded by mountains is located in the east  near Christ’s head.

∙ The Islamic world have a completely different view of the world. o Muhammed al-Idrisi

 He created one of the most advanced ancient world maps called  Tabula Rogeriana for Roger II in 1154.

∙ The common thing between the Chinese map and the map produced by the  Islam is that they tend to put where they are from in the center of the map  they produce.

o Preformation of the world

o Increase in navigation and trade

∙ Growth of the European Cartography

o Geographical spread of merchant capitalism If you want to learn more check out What is the meaning of recommended dietary allowance (rda)?

o Rise of nationalism and nation-states in Europe

o Perspective of the world with respect to a person physically walking  through the landscape.

o Important for understanding distance, scale and representation of the  landscape. If you want to learn more check out What is the meaning of evaporative cooling?

o Creates illusion of sense of proportion and depth

o Encourage people to think in terms of lines of latitude and longitude. ∙ Map of Nicolas Bataille

o Not to scale

∙ William Hogarth drew the “Satire on False Perspective” We also discuss several other topics like What is the meaning of law?

o Particular style of painting – rules-line painting (Jiehua). This kind of  painting used the ruler for painting to give an accurate description of  depth.

o This map was used by the aboriginal people in Australia.

o Circles in this picture represent a gathering place.

o This is a map of where people might go to find food or water. o This map represents a gathering place for humans.

∙ For the aboriginal people, there is no separation between the spiritual world  and the material world.

o Possum is an animal.

o People in those days would draw map on the inside skin of the animal  and wrapped around.

o They would travel around the world with this map wrapped around. ∙ Native Americans used a similar kind of thing for mapping, but instead of  possum skin, they would use deer skin.

o Rebbilib – This is a map where each of the shells represent an island.  Coconut fiber is used to represent the current.

o The world as it is, and the world understood through mapping is quite  different.

o The first set of decisions involve around what to put on the map and  the choices of projection.

o The second set of decisions involve around how to represent what we  are looking at, how to put north on top and south on the bottom, what  kind of symbols and colors to use, etc.

o The symbols used by people used 100 years ago for religious buildings  was a cross.

o Cross became a universal symbol for all religious buildings. o The third set of decisions involve around decoding like how the data,  the symbols, the colors are understood.

o The fourth set of decisions involve around the perception of the world  like how the world can be perceived using map.

∙ Picturizing the map is culturally based.

∙ Pareidolia, the Greek word for “Beyond the image” is a fancy term for the  process where our brain tries to make sense out of the things we see without  thinking.

∙ Interpretations of what we see are culturally and historically specific. ∙ Trompe-l’oeil is the term referenced for the style of art of tricking the eye.  ∙ Mapping of the same data can be done using different symbols.  ∙ Reasons for difference between how the world is and the way we understand  the world to be is due to:

o Convenience (easy to carry around)

o Allows us to focus on particular parts of Earth by changing the scale of  the map.

∙ Why is the way to project a 3-D object to a 2-D one important? o This can lead to different understandings of sizes; hence they can  influence our actions.

o Polar circumference of the Earth is 24,860 miles.

o Longitude: Measures the east or west distance from the equator.

o Meridians: The lines of longitude.

o There is no natural basis for determining the longitude.

o Time Zone is based on the Prime Meridian.

o Absolute location is expressed in terms of degrees, minutes and  seconds.

What is the major source of vitamin k for humans?

What are the three leaf arrangement patterns?