UT / Chemistry / CHEM 120 / In chemistry, what is the function of hybridization?

Description: These notes cover what is going to be on our next exam.

What is the valence shell electrons pair repulsion model?

Don't forget about the age old question of How did kepler challenge the earth­ centered model?

­ metalloids (along the line): elements exhibit both metallic and nonmetallic properties

What is the function of nonpolar covalent bond?

­ Pauli’s Exclusion Principle: one orbital can only hold two electrons

­ Hund’s Rule: electrons in the same subshell occupy orbitals one at a time  before they are paired

Effective nuclear charge (Zeff) – net (positive) charge attracting electrons; increases from left to  right across a row, and does not change going down a group (more protons = stronger pull on  electrons)

Atomic radii – the covalent atomic radius is one half of the distance between covalently bonded  nuclei; increases in going down a group (orbital size increases) and decreases going from left to  right (effective nuclear charge increases so valence electrons are pulled closer to nucleus)

­ Exception: Oxygen’s ionization is lower than Nitrogen’s.  Why? If you  look at the orbital notation, you will find that Nitrogen’s 2p orbitals are

half filled meaning it will be harder to remove those electrons

o Become more negative when going from left to right (halogens have the most  negative electron affinities?); no trend in groups

Chemical bonds – force that holds atoms together in a compound

relative orientation in the molecule

Octet rule: a chemical bond is the sharing or transfer of electrons to attain a stable electron  configuration for the bonding atoms; elements seek to obtain noble gas electron configuration  If you want to learn more check out What do exponential functions solve?

Ionic bonds and ionic compounds: transfer of electrons from a metal to a nonmetal; electrostatic  attractive force between oppositely charged ions

o Predicting charges of ions and formulas of ionic compounds

o Sizes of ions: influences structure and stability of ionic solids and it is determined by measuring the distance between ion centers

o isoelectronic ions: ions with the same number of electrons

o Lattice energy: energy that takes place when separated gaseous ions are packed  together to form an ionic solid

­ compounds with smaller ions and higher charges have higher lattice

Covalent bonds and molecular compounds: the sharing of electrons between two atoms  (interaction between nonmetals); covalently bonded atoms compose a molecule = molecular  compounds; ionic compounds form when cations and anions are bonded together by ionic bonds If you want to learn more check out What is teshik, tash?

o Nonpolar covalent bond: electrons are equally shared  Don't forget about the age old question of When was the first civil war in rome?

­ If any atom lacks an octet, form double/ triple bonds as necessary

Remember multiple bonds are shorter and stronger than a single bond thus has a greater bond energy!

­ Resonance: when a molecule has multiple structures to describe the

molecule  the resulting structure is derived from the average of the

­ Formal charge (helps us choose between alternative Lewis structures fewest charges and negative charge put on the most electronegative atom  = better Lewis structure): occurs when atoms end up with more of fewer

o Incomplete octets: Some molecules have less than an octet of

around it (occurs in 3rd row or below elements)

o Type 2: some metals form more than one type of positive ion (charge is specified  by roman numeral)

­ Alternatively, for metals that form only two ions, ions with higher charge  in in “­ic”, and ions with lower charge end in “­ous”

­ first element is named, then the second is named as if it were an anion ­ prefixes are used to indicate the number of atoms present

Polyatomic Ions­ consist of atoms joined as in a molecule, but they have charge KNOW THESE:

Bond polarity: covalent bond formed between two atoms with different electronegativities are  polar; a molecule that has a center positive charge and a center of negative charge is said to have  a dipole moment

4. determine polarity of a molecule based on overall dipole moment of molecule 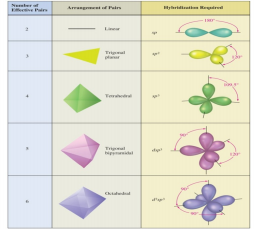 o π bonds: parallel unhybridized p orbitals share electron pair in the space above  and below the σ bonds

o Double bond = one σ bond and one π bond

Divergent validity is demonstrated by using, what?

What is the difference between lagging and leading strands?