Description: these notes cover what's going to be on Exam #2

How did Copernicus, Tycho, and Kepler challenge the Earth­centered model? Modern science began with the Copernican revolution.

∙ He began to look for new ways to predict planetary positions

∙ Believed in heliocentric ideas  discovered geometric relationships that strengthened this  believe, because they allowed him to calculate each planet’s orbital period and relative

distance from the Sun

∙ His model was complex, because it was based on the believe of perfectly circular

What keeps the planet rotating and orbiting the sun?

∙    Observed an alignment of Jupiter and Saturn

∙    He also saw a supernova – explosion of a distant star

∙    Proved that comets lay in the realm of the heavens  We also discuss several other topics like What is the purpose of heuristics?

∙    Improved the Copernican system; more accurate, but didn’t come up with an explanation  for planetary motion If you want to learn more check out Why was the american revolution considered a process instead of an event?
Don't forget about the age old question of What is the inverse function of the exponential function?
We also discuss several other topics like Where were oldowan artifacts excavated?

∙    He was convinced that planets must orbit the Sun, but because he couldn’t detect stellar

Who discovered that the basic law that describes how gravity works?

parallax, he thought that the Earth was stationary

∙        His model: the Sun orbits Earth and planets orbit the Sun

∙ Worked to match circular motions to Tycho’s data; which still was off by about 8

arcminutes, which is why he had to abandon the idea of circular orbits

∙ Found that orbits are not circles, but are special ovals – ellipses

∙ Each ellipse has two foci

∙ The long axis of the ellipse is called major axis, each half of which is called semimajor

∙ The short axis is minor axis, half of which is semiminor axis

∙ Eccentricity – describes how stretched out an ellipse is compared to a circle  ∙ A circle is an ellipse with zero eccentricity  We also discuss several other topics like The origins of rome are explained using what? 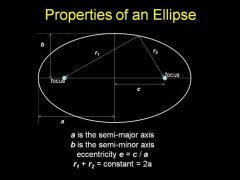 By using elliptical orbits, Kepler created a Sun­centered model that predicted  planetary positions with outstanding accuracy. We also discuss several other topics like How are reliability and validity related?

A planet moves faster in the part of its orbit nearer the Sun and slower when farther from the  Sun, sweeping out equal areas in equal times

More distant planets orbit the Sun at slower average speeds, obeying the relationship p2 = a3  P is planet’s orbital period and a is its average distance from the Sun

Newton showed that the same physical laws that operate on Earth also operate in the heavens.

In space, there is friction of air:

Because Jupiter is much more massive than Earth, it exerts a stronger gravitational force on  passing asteroids and comets, and sends them scattering with greater acceleration

For any force, there is always an equal and opposite reaction force

What keeps the planet rotating and orbiting the Sun?

Conservation of energy: energy can be transferred from one object to another or  transformed from one type to another, but the total amount of energy is always conserved

THE LAWS OF GRAVITY:

Isaac Newton discovered that the basic law that describes how gravity works. Newton expressed  the force of gravity mathematically with his universal law of gravitation:

to the product of their masses

∙ The strength of gravity between two objects decreases with the square of the distance  between their centers. Gravitational force follows an inverse square law

What is the difference between lagging and leading strands?

What are the similarities between terrestrial planets and jovian planets?