Description: Notes from class and the book

Roles and functions of Congress

● Representation: the process of bringing the people’s voice(s) into government ○ Delegate: a legislator who sees him/herself as elected to represent the interests of the district; assumes that what’s good for each district is good for the whole nation- People’s Preference

○ Trustee: a legislator who sees him/herself as elected to pursue the best interest of the nation, even if counter to wishes of won district; assumes he/she has the most, best knowledge of how to act- People’s Interests

How many members in Congress?

○ Politico: somewhere in the middle; usually votes district’s wishes when district is sending a cohesive and clear message (rare), but ventures out on own in less publicized and/or more complex issues- Most Legislators do this

● Oversight: the process by which the legislature reviews the activities of the executive agencies responsible for implementing the policy/laws the legislature authorized

● Education: the process of informing and instructing the citizenry on the affairs of government

● Lawmaking: the process of debating and initiating the rules that govern society ● Bill: a proposed law, drafted in legal language

● Committees: Most important goal: they control the congressional agenda and guide legislation from its introduction to its senff of to the president

Appointment of the Solicitor General.

○ They make decisions that have legal implications

○ Decide when laws should be enforced when law is ambiguous

○ Ex: power of the police to decide whether to give you a speeding ticket or not We also discuss several other topics like ucsc chem

○ When a bureaucratic agency is authorized to engage in broadly-defined activities such as “protect the public welfare,” the rules the administrators make to comply are policies in themselves

○ Pertains to the expertise of bureaucrats and the fact that in an increasingly complex world, elected officials often consult them for their advice on particularly technical, complicated, or troubling issues

The types of Bureaucratic agents discussed

○ Headed by a Cabinet member

○ Not corporations and not part of any cabinet department; there are many different types with varying degrees of actual independence

● Independent Regulatory Commission or Board

○ Usually more specialized, narrower function and entities than the main department or agency Don't forget about the age old question of which of the following theory links birth rates and death rates to a society’s level of industrialization? soc101

● Presidential Veto: when congress passes a law, the president can reject the law and send back to congress

● Pocket Veto: a special veto exercised by the president after a legislative body has adjourned

● Line item veto: the power of the President to veto individual lines or items within a piece of legislation without voting the entire bill. Unconstitutional ● Veto override: the reversal of a presidential veto by a two-thirds vote in both houses of Congress Don't forget about the age old question of math 3070 class notes

How the Cabinet, EOP and White House Staff are chosen and confirmed ● Cabinet: the heads of executive departments and others designated who are appointed by the president and confirmed by the senate

○ Kitchen Cabinet: small group of Cabinet members whom the President does ask for advice

● White House Staff: a group of people whom the President relies on to organize schedules and plot political, legislative, and international strategies ○ They do NOT need Senate approval

● Executive Office of the President: an intermediate layer between the president’s core staff (in the White House) and the rest of the federal bureaucracy in the cabinet departments. They help advance the president’s policy preferences

○ Ask a court to reconsider

● Original Jurisdiction: the authority of a court to hear a case first

● Appellate Jurisdiction: the authority of a court to review decisions made by lower courts

● Appeal: a rehearing of a case because the losing party in the original trial argues that a point of law was not applied properly

Types of law we discussed and your book discusses

○ Violation of a criminal law is called crime

○ Violation of a civil law is called a tort

○ Law established by the bureaucracy, on behalf of Congress

○ Laws whose content, or substance, defines what we can or cannot do ● Procedural Law

○ Laws the establish how laws are applied and enforced

○ Procedural Due Process: procedural laws that protect the rights of individuals who must deal with the legal system

○ Laws passed by a state or the federal legislature

○ 435 members: based on proportional representation

○ Elected all at once

○ Have to be citizen for at least 7 years

○ Have to be citizen for at least 9 years

● Delegate: Delegates see themselves as agents of those who elected them. They vote based on how they think the people in their home state or district would want them to vote. (delegates truly represent the will of the people)

● Partisan: A partisan feels they must always vote along party lines, thus supporting their political party. However the party plans to vote, they follow. (loyal party members)

● Trustee: A trustee believes that each question they face must be decided on its own merits. Independent judgment are their guides. They vote based on their own judgment and ideology.

● Politico: A politico is a combination of the delegate, partisan, and trustee. A politico tries to keep everyone happy and thus is a true politician.

● Standing Committees: committees in each house of congress that handle bills in different policy areas

● Joint Committees: committees that draw their membership from both the Senate and House

● Conference Committees: committees that are formed when the Senate and House pass a particular bill in different forms. Members from each house come together and iron out differences and bring back a single bill

● Select Committees: committees appointed for a specific purpose, such as the Watergate investigation

● House Rules Committee: the committee that determines how and when debate on a bill will take place

● Select Committee: a committee appointed to deal with an issue or a problem not suited to a standing committee

Presidential interpretations of the constitution

● Literalist Theory: only the powers in the document (constitution). If it’s not spelled out, don't do it

● Stewardship Theory: a little more expansive; you cannot do the things the Constitution tell you not to do, but can do the rest

● Prerogative Theory: I have a duty to the country, I’ll just do what’s best

● A type of writ, meant for rare use, by which an appellate court decides to review a case at its discretion. Means "to be more fully informed." A writ of certiorari orders a lower court to deliver its record in a case so that the higher court may review it. The U.S. Supreme Court uses certiorari to select most of the cases it hears. The writ of certiorari is a common law writ, which may be abrogated or controlled entirely by statute or court rules

● Rule of Four: the unwritten requirement the four Supreme Court Justices must agree to grant a case certiorari in order for the case to be heard

● Amicus Curiae Briefs: “friend of the court” documents filed by interested parties to encourage the Court to grant or deny certiorari or to urge it to decide a case in a particular way

○ Chief Administrator: responsible for agencies at the national level and the implementation of national policy- as chief administrator he appoints a cabinet, nominate top federal officials, including federal judges

○ Commander-In-Chief: this provides the president with military authority ○ Chief Foreign Policy Maker: this allows him to negotiate treaties and meet with foreign ambassadors

○ Give Congress information of the state of the union

○ Executive Orders: executive orders are clarifications of Congressional policy issued by the president and having full force of the law

○ Appointment of the Solicitor General (basically the lawyer for America) ○ Pardoning Power: exempt person, convicted or not, from punishment of a crime

■ Casework: Activities of members of congress that help constituents as individuals, particularly by cutting through bureaucratic red tape to get people what they think they have a right to get

■ Pork Barrel: setting aside money for your state

● Incumbency Advantage: the electoral edge afforded to those already in office

● How a bill becomes of law (short version)

● A custom whereby presidential appointments are confirmed only if there is no objection to them by the senators from the appointee's state, especially from the senior senator of the president's party from that state.

● Seniority System: the accumulation of power and authority in conjunction with the length of time spent in office

■ The average representative has 17 assistants, the average senator has 40

○ Strong Chief-of-Staff: the chief of staff is given a lot of power over who generally controls access to the president

○ Spokes of a wheel: the president is the hub and the advisors are the spokes spread out from the hub. Each advisor has open access to the president

● Petty Offenses: not very serious (as in no or not much harm done to other persons or their property); normally punished by fines; traffic violations ● Misdemeanors: somewhat more serious but still not considered very harmful; normally punished by larger fines or relatively short jail sentences

● Felonies: very serious crime (a lot of damage done); these are punished by time in prison

○ Speaker of the House: current is (Paul Ryan)

○ Presiding Officer (technically VP, the only thing he can do is tie breaker, Mike Pence)

○ President Pro Tempore (symbolic): (Orrin Hatch), whoever is in senate the longest

● Head of State: the apolitical, unifying role of the president as symbolic representative of the whole country

● Head of Government: the political role of the president as leader of a political party and chief arbiter of who get what resources

● Impeachment: a formal charge by the House that the president (or another member of the executive branch) has committed acts of treason, bribery, or other high crimes and misdemeanors, which may or may not result in removal from office

● State of the Union address: a speech given annually by the president to a joint session of Congress and to the nation announcing the president’s agenda ● Executive orders: clarifications of congressional policy issued by the president and having the full force of law

● Divided government: political rule split between two parties, in which one controls the White House and the other controls one or both houses of Congress ● Bureaucracy: an organization characterized by hierarchical structure, worker specialization, explicit rules, and advancement by merit

● Patronage: system in which a successful candidate rewards friends, contributors, and party loyalists for their support with jobs, contracts, and favors ● Federal Register: publication containing all federal regulations and notifications of regulatory agency hearings

● Judicial Review: the power of the courts to determine the constitutionality of laws

● Precedent: a previous decision or ruling that, in common-law tradition, is binding on subsequent decisions

● Hold of Court= Opinion of Court

○ Majority: When at least 5 agree, will always be the opinion of the court. The opinion is the written decision of the Court that states the judgement of the majority.

○ Concurring: documents written by justices expressing agreement with the majority ruling but describing different or additional reason for the ruling. Justices agree with majority but want to add something

○ Dissenting: documents written by justices expressing disagreement with the majority ruling. When they Justices does not agree. Holds no legal power 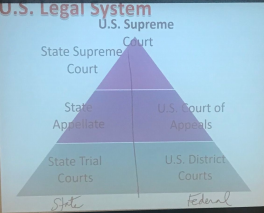 the target audience is that portion of the whole audience that the speaker most wants to persuade.