- Do not exist as discrete molecules

- Most are made up of a metal and a nonmetal

- Delocalization (electrons are not shared in a specific location) Don't forget about the age old question of How do you find the area of a triangle with 2 sides and an angle?

- Do not have well-defined bonds

Electronegativity - relative ability of an atom to attract electrons to itself

How many valence electrons will magnesium lose to have the same electron configuration as a noble gas?

- Unequal sharing of bonding pair of electrons between atoms

- Results in uneven distribution in charge

How many pairs of electrons are shared in a single bond?

We also discuss several other topics like What is meant by quantized energy?

- “Dots” are arranged around elemental symbol

- A nonmetal and a metal

- Single bond signifies the sharing of one pair of electrons

- Lone pair of electrons are those not shared Don't forget about the age old question of How do receptors send information to the brain?

1. Determine the number of valence electrons

2. Arrange atoms in a pattern that shows how they are arranges

3. Complete octets of atoms connected to central atom by adding lone pairs 4. Compare the number of electrons in structure to the number determined in step 1 5. If there are remaining electrons, place them around the central atom 6. Complete the octet around central atom (if needed) by converting one or more pairs of lone pairs on adjacent atom into bonding pairs Don't forget about the age old question of How are mature t cells produced and selected in the thymus? 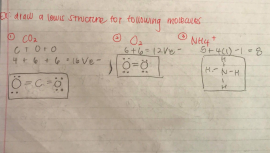 Resonance - when two or more equivalent lewis structures can be drawn for one compound Q: How can I determine which resonance structure is the best?

Exceptions to the Octet Rule:

1. Molecules have odd number of electrons = free radius If you want to learn more check out What is meant by precedent?

depends on… If you want to learn more check out What is the social goal of negative reciprocity?

- Identity of the atoms

- Number of bonds between them

Bond Order - the number of bonds between two atoms 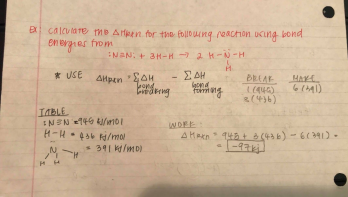 - The first words are the name of the first element in the formula - The second word, change the ending of the second element to -ide - Use prefixes to indicate the number of atoms of each element in the molecules

- Anion named by adding the -ide suffix to name of element

- Formulas must be neutral

Ex: Write the name of the following compounds

- Polyatomic anions containing oxygen in combination with one or more other elements - Most have name based on the name of the element that appears first in the formula, with ending changes to -ite or -ate

- -ate has one more oxygen than -ite

- Prefix per- means one more oxygen

Ex: Write the names of the following compounds

- Contain hydrogen and a monatomic anion

- Not always predictable from lewis structures

- Three Dimensional arrangement of atoms in a molecule

Chiral molecule - one that is not superimposable on its mirror image

Enantiomer - one pair of optical isomers of a compound; mirror images that cannot be superimposed

- In molecules, atoms are held together by strong covalent bonds (intramolecular forces) - Responsible for many of the macroscopic physical properties of substances - Some molecules may have several forces but the strongest one dominates the behavior of molecules

- Relative ease with which the electron cloud in a molecule, ion or atom can be distorted

- Hydrophilic - having a tendency to mix with, dissolve in, or be wetted by water

How is fabric made by weaving?

What point is preferred along an indifference curve?