Course: Principles of Economics I

Description: These notes cover Chapters 9-18. I included points from lectures and the textbook (some of which she did not cover thoroughly).

1. Market consists solely of the country’s buyers and sellers

2. Domestic price adjusts to balance the domestic demand and supply of the good 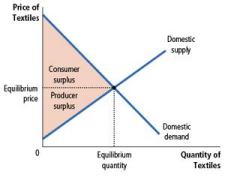 What are the arguments for restricting trade?

○ The country will EXPORT this good. 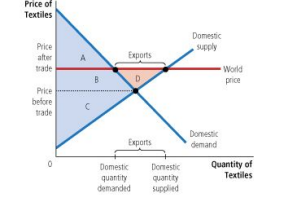 Don't forget about the age old question of what is the difference between Adenylate Cyclase and Phospholipase C?

Social value includes the private value of the good.

We also discuss several other topics like what is population regression?

Total surplus increases when the country EXPORTS, so the country is better off as a whole (economic well-being rises). If you want to learn more check out What is the Missouri Compromise?
Don't forget about the age old question of Who is Lauren Olamina?

○ The country will IMPORT this good. 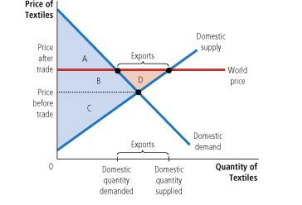 Total surplus increases when the country IMPORTS, so the country is better off as a whole. (economic well-being rises) Don't forget about the age old question of What is ethnography?

● A tax on imported goods

● Government makes revenue → but there is some deadweight loss 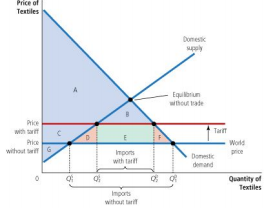 If you want to learn more check out what homogeneous mixture means?

● Does not bring any revenue for the government

○ Free trade allows consumers to import goods from other countries, so the new domestic industry will not grow if people are buying from someone else

○ Not all countries play by the same rules

○ Trade restrictions are useful when bargaining with trade partners ○ E.g. threatening to impose a tariff unless the other country removes their tariff

● Negative externalities cause the cost to society of producing the good to be greater than the cost to producers of the good.

● Social Cost: includes the private costs of the good + the costs to the bystanders who are affected by the negative externality (e.g. pollution) 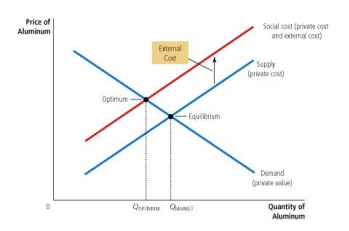 ● When there is negative externality, the social cost exceeds the private cost. The Optimal Quantity is now smaller than the Equilibrium Quantity.

Makes sure buyers and sellers take into account the external effects of the production of the good.

● How can we achieve the optimal outcome?

○ Tax producers for each unit of the good produced

● Tax should reflect the external cost of producing the good

● Social Value: includes the private value of the good + the external benefits to society

● Social value curve is above the DEMAND curve because it takes into account the external benefits on society. 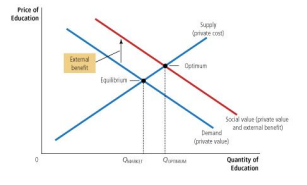 ● When there is a positive externality, the social value exceeds the private value. The Optimal Quantity is now larger than the Equilibrium Quantity.

Government solutions in order for the production of the good to increase up to the amount that is socially desirable.

● How can we achieve the optimal outcome?

○ Subsidize the production of the good (e.g. public schools subsidized by the government)

● Subsidy should reflect the external benefits of the good

○ New demand curve will shift upward by the amount of the subsidy ○ Demand curve after subsidy should coincide with the social value curve.

○ Tradable Pollution Permits: EPA requires factories to reduce pollution to a limited amount per year. (e.g. 300 tons a year). Firms might buy or sell pollution permits from/to one another.

● If private parties can bargain costlessly over the allocation of resources, they can solve the problem of externalities on their own.

○ Government regulation NOT NEEDED in order to solve the externalities problem ● Furthermore, regardless of how legal rights are distributed, the parties will reach the efficient allocation.

● The Tragedy of the Commons / Gov. Solution to Problem

○ People can be prevented from using the good

○ Both excludable and rival in consumption

○ You don’t get the good unless you pay for it, and once you have it, you’re the only person who benefits from it

○ Example: ice cream cone → can prevent someone from eating it if you don’t give it to them (excludable), someone else can’t eat the same ice cream cone you are eating (rival)

○ Neither excludable or rival in consumption

○ People cannot be prevented from using a private good

○ Example: fire alarm → everyone can hear it (not excludable) and everyone gets the benefit of the warning (not rival)

○ Rival in consumption but not excludable

○ Example: fishing → when one fisherman catches a fish, there are less fish for others to catch (rival), but you can’t prevent others from fishing (not excludable)

○ Excludable but not rival in consumption

○ Example: firework show → people will not buy a ticket for the show because they can watch the fireworks from outside for free

● Because public goods are not excludable, the free-rider problem prevents the private market from providing the efficient outcome, so government must provide them

○ Example: government can raise everyone’s taxes by $2 in order to pay someone to put on a “free” firework show

The Tragedy of the Commons Problem

● Tragedy of the Commons arises because of an externality. Once a good is provided, there is no control on how much of it people use.

● When one person uses a common resource, they diminish other people’s enjoyment of it.

● Common Goods are not excludable therefore people can use however much of it that they want to, reducing the quality / quantity of the good

Chapter 13: The Costs of Production

● Costs in the Short Run

● Costs in the Long Run

● Total Revenue: the amount that the firm receives for the sale of its output ○ The quantity of the output produced by the firm multiplied by the price at which it sells its output

● Total Cost: the amount that the firm pays to buy inputs

○ The sum of the firm’s explicit and implicit costs

● Implicit Costs: input costs that do not require a cost outlay by the firm ○ Examples: foregone earnings, foregone interests

● Production function gets flatter as the quantity of inputs increases because of Diminishing Marginal Product.

○ The increase in the quantity of output obtained from an additional unit of that input.

○ As the number of inputs increase→ the marginal product declines 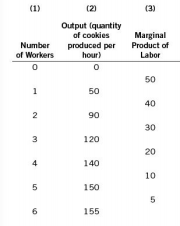 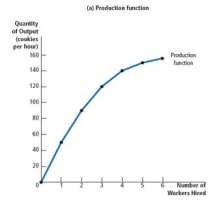 ● The relationship between the quantity produced and the total cost ● Total-cost curve gets steeper as the amount produced rises because producing more outputs means there are more costs involved (e.g. paying more workers) ○ Also due to the Diminishing Marginal Product

■ As more workers are hired, each one adds less to the production

and increases the costs 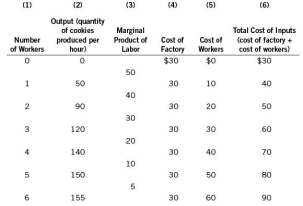 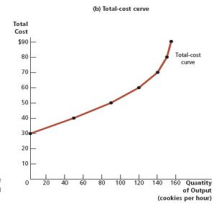 ○ Costs that do not vary with the quantity of output produced

○ Incurred even if the firm produces no outputs

■ Ex: the rent paid for the factory

■ Fixed cost goes down as the quantity produced increases

○ Costs that do vary with the quantity of output produced

■ Cost goes up as the quantity produced increases

○ The fixed cost divided by the quantity of output

○ The variable cost divided by the quantity of output

○ The total cost divided by the quantity of output

○ Tells us the cost of the typical unit of output, but does not tell us how 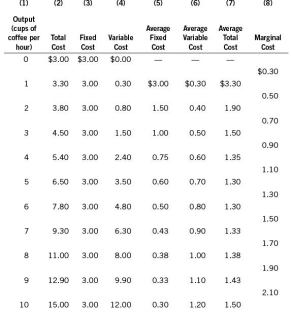 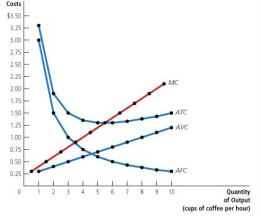 ● Marginal cost eventually rises with the quantity of output

● The average-total-cost curve is U-shaped

Costs in the Short-Run

● Companies can’t increase the size of their factories over night

Costs in the Long-Run

● Over a period of year, companies can expand their factories to increase

● Short-run Shut Down vs Long-run Exit

● Characteristics of a competitive market:

○ Many buyers and sellers

● Buyers and sellers are “Price Takers” → take the price as given

The Revenue of a Competitive Firm

○ Price of the good multiplied the the quantity produced

○ Total revenue divided by the amount of output

○ “When Q rises by one unit, total revenue rises by P dollars”

■ marginal revenue = the price of the good 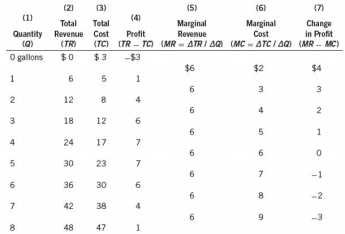 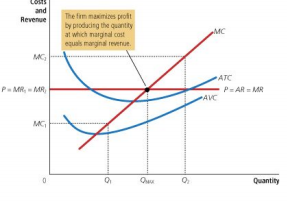 ● Firm’s decision to leave the market

● If the firm exits → will save variable AND fixed costs

● Profit is the area between P and ATC

● Losses are the are between MC and ATC

● Number of firms in the market is fixed

● Firms are able to enter and exit the market

● When firms exit → quantity supplied decreases → prices & profits increase ● At the end of the entry and exit process, firms that remain in the market must be making zero economic profit

● Long-run supply curve is horizontal at the minimum of ATC

● One seller → decides the price of the good (relatively high)

● Barriers to entry → other firms cannot enter the market & compete

○ A key resource required for production is owned by a single firm ○ Examples: one oil well, diamond mine, etc.

○ When more firms enter, their ATC rises which each level of output, in a

● Selling more means reducing the price of all units, therefore marginal revenue is always below the price of the good.

● Average revenue always equals the price of the good.

● Maximizes profit at the quantity where the marginal revenue = the marginal cost. ● Use the demand curve to find the highest price that consumers are willing to pay for that quantity

● When MC < MR → can increase profit by producing more output

● If MC > MR → can increase profit by producing less output

● The socially efficient quantity is where the demand curve and the marginal-cost curve intersect.

○ Sell at higher price for those willing to pay more

○ Government regulates the prices of the company

○ Government can run the monopoly itself

○ Inefficient: bureaucrats have no incentive to cut costs

● One firm’s actions affect the other firms

○ Each decides how much to produce

● Nash Equilibrium: situation in which economic actors interacting with one another choose their best strategy given the strategies that the others have chosen

● Firms in an oligopoly produce a quantity greater than a monopoly but less than that of perfect competition.

● Study of how people behave in strategic situations

○ Take into consideration how others might respond to your decisions ● Dominant Strategy: most payoff regardless of what the other person might do ● Oligopolists “play a game” in trying to reach the monopoly outcome

Chapter 18: The Markets for the Factors of Production

● Other Factors of Production

○ Output → quantity of the good

Diminishing Marginal Product → as the # of workers increases, the marginal product of labor declines

market price of the outcome

- The extra revenue a firm gets from hiring an additional worker

● Hire workers up to the point where the value of the marginal product of labor EQUALS the wage.

● Above this level of employment → VMPL < Wage

● Below this level of employment → VMPL > wage

■ Example: robots that do all the work

● Supply of Other Factors

○ When immigrants come into a country, the supply of labor increases

Equilibrium in the Labor Market

● Wage adjusts to balance the supply and demand of labor

● Firm has hired until the VMPL = the wage (maximizing profit)

Other Factors of Production

What are The Tasks of the Geographer?