Description: This study guide goes over the rise and diversity of animals, homeostasis, animal nutrition, and circulatory and respiratory systems

Introduction to the Kingdom Animalia

∙ Multicellular organisms were thought to have mainly evolve and rise

during the Cambrian explosion.

∙ Remember, members of the Kingdom Animalia DO NOT have a cell  wall. Instead, they are all eukaryotic, multicellular, motile, and

∙ Organisms in the animal kingdom mainly reproduce sexually beginning with the fusion of the egg and sperm, ending with the multicellular

∙ When you think of metamorphoses, think of when an organism’s life

cycle consists of two different stages; for example, a butterfly.  ∙ Monophyletic: a group of organisms that shared a common ancestor

What is the difference between metazoa parazoa & eumetazoa?

and all its members.

∙ Level of organization of animals (in order):

2. Tissue: a group of cells that work together to perform one or more

3. Organ: consists of two or more tissues working together to perform a

4. Organ System: group of organs interacting with each other to

∙ Animals are divided into 2 main branches: Parazoa and Eumetazoa ∙ Parazoa: do not have symmetry

What is animal diversification?

If you want to learn more check out What are the causes of autism spectrum disorder?

∙ Organisms that do not have a coelom are known as acoelomate. ∙ Hollow filled cavities are known as pseudocoelom.

∙ Two types of symmetry: asymmetrical and radial symmetry  ∙ The blastopore is the first embryonic opening. In Deuterostomes, the

Rise and Diversification of Animals

strength, speed, toxins, camouflage to detect, capture and eat other

∙ Animals most likely evolved from some single-celled eukaryotes similar

∙ Animals in the early Cambrian oceans were very diverse in their

morphology, way of living, and had taxonomic affiliation. ∙ Several hypotheses regarding the cause of the Cambrian explosion

include: new predator and prey relationships, an increase in the

atmospheric oxygen, and the evolution of the Hox gene complex. ∙ Some challenges that are associated with the increase in size and  We also discuss several other topics like What point does your moral code keep you from going along with something?

∙     3 IMPORTANT BODY PLANT ASEPCTS THAT ALL ANIAMLS MUST HAVE: 1. Symmetry: bilateral symmetry and cephalization.

have better movement and cephalization.

∙ Parazoans do not have tissues, organs or a definite symmetry. ∙ Sponges are an example of a Parazoan. They are found within the

∙ The central layer of Parazoans contain a gelatinous, protein-rich matrix called the mesophyl, which contains spicules and fibers of a tough

∙ Spicules and spongin strengthen the body of the sponge.  ∙ The outer layer of Parazoans contain the protective epithelium. ∙ Sponges reproduce sexually and asexually. Sexually by egg/sperm and  We also discuss several other topics like What does de jure discrimination mean?

∙ Tissues are cells working together to perform a specific function. ∙ During the development stage, germ layers give rise to the tissues and

organs of the animal embryo.

∙ Animals in the phylum Porifera do not have “true tissues.” Every single  cell in sponges work independently from each other, meaning they do

not have true tissues.

∙ Eumetazoans are animals with true and distinct tissues. ∙ Within the embryo, there are distinct layers:

2. Outer ectoderm: forms the epidermis and nervous system. 3. Middle mesoderm (only in bilateral animals): forms the

∙ Body cavities may cushion suspended organs, act as a hydrostatic skeleton, and enable more space for organs and allow them to move Don't forget about the age old question of What is frank lloyd wright's style of architecture called?

∙ Echinoderms are known as an ancient group of marine animals that are characterized by the deuterostome development and an endoskeleton. Early Chordate Evolution

∙ There are 4 derived characteristics that all chordates share: 1. Notochord: flexible rod that provides support.

2. Dorsal, hollow nerve cord: develops into the brain and spinal

parts of the head.

4. Muscular, post-anal tail. We also discuss several other topics like What is one clue to the relationship between supermassive black holes and galaxy evolution?

∙ Half a billion years ago, the first vertebrates appeared in the oceans. ∙ The jawed fish became dominant, then the amphibians invaded the

land. Reptiles replaced them as the dominant vertebrates on land. ∙ Bird are closely related to dinosaurs and mammals are dominant after  We also discuss several other topics like Where are the 3 types of capillaries found?

the death of dinosaurs.

and their physical appearance.

∙ Retain many reptilian traits such as amniotic eggs and scales on legs. ∙ There are 2 main traits that distinguish them: Feathers: provide lift for

flight and trap heat. And the Flight Skeleton: which the bones are thin  and hollow and some are fused.

∙ Mammals and vertebrates are different because of their hair and

egg): brings fetal and maternal blood into close contact. ∙ Two subclasses of mammals: Prototheria, which lay eggs and are one

group: Monotremes. Theria: are viviparous and are in two living groups: Marsupials and placental mammals.

∙ Primates are known as the mammals that gave rise to our own species. ∙ The two features that allowed them to survive their environment were

their grasping fingers and toes and their binocular vision.  ∙ Anthropoids are diurnal: which includes monkeys, apes, and humans. ∙ Hominoids are similar to humans. Consist of humans and their direct

ancestors. Chimps and gorillas was the common ancestor. First

∙ H. sapiens is the only surviving hominid. Our species are about

2. Use and making of tools.

∙ Reproduction and development: body uses the reproductive system.  ∙ 3 interrelated systems in large animals all depend on a combination of

∙ Digestion is the process that involves the breaking down of

food down into molecules small enough for the body to absorb. ∙ 2 types of digestion: Mechanical: chewing, increase surface area of

food. Chemical: splits food into small molecules that can pass through

∙ Elimination: having the undigested material moved out of the  digestive system.

∙ Disposal of metabolic wastes  and balance of blood

∙ Skin and its derivatives

activities; detection of stimuli  and formulation of responses  to them

∙ Signaling molecules are released into the bloodstream by the  endocrine cells in the endocrine system. These cells reach all the

locations of the body.

∙    In order for cells to function and communicate properly, internal body

conditions must be constant.

∙     Specialization of body structures have increased since the evolution of

∙    Homeostasis is known as the dynamic constancy of the internal

environment and it is essential for life.

through sweating and dilation of blood vessels in skin.

∙    If hypothalamus detects low temperature, it initiates heat conservation through shivering and having the blood vessels in the skin constricted.  Regulating Body Temperature

∙ One of the most important aspects of the environment is temperature. ∙ Conformers: organisms who have a body temperature that conforms

to their environment. An animal that is a conformer allows its internal  conditions to change with accordance to its external environmental

∙ Thermo-regulators: organisms who regulate their body temperature.  An animal that is a regulator uses its internal mechanisms to control

∙ Some organisms are Ectotherms, which means they regulate  temperature using behavior and have low metabolic rates. They also

∙ Heat transfer is controlled by the amount of blood flow to the surface  of the animal. This is known as countercurrent exchange.  Coordination and Control/Endocrine Glands and Hormones ∙    Hormones are signaling molecules that are sent out by the endocrine  system. These hormones are sent out to a specific location in the body  or throughout the body. Only cells with receptors for a specific

substances into body cavities or surfaces of the body.

∙ Water is distributed between intracellular and extracellular

Evolution of the Vertebrate Kidney

∙ The amphibian kidney and fish kidney are identical.

∙ Marine reptiles drink the seawater and excrete an isotonic urine while  the Terrestrial reptiles reabsorb much of the water and salt in their  nephron tubules.

∙ The renal artery provides blood for each kidney and produces urine.  Urine is drained from each kidney through a ureter into the urinary

∙ Inside the kidney, the renal pelvis is formed from the mouth of the  ureter when it is flared open. It is divided into an outer renal cortex and inner renal medulla.

∙ The most important function of the kidneys is to eliminate harmful

substances that animals and humans eat and drink.

outside of the cells.

∙ Gastrovascular cavity: animals have this cavity when they have simple  body plans and this functions as both digestion and distribution of  nutrients in the body.

∙ Fick’s Law of Diffusion is the rate between 2 regions

A = Area over which diffusion takes place

d = distance over which diffusion occurs

∙ The (R) rate of diffusion can be changed in different ways: 1. Maximize the area of diffusion surface and concentration

2. Minimize diffusion distance and exposure to depleted fluid.  3. Faster flow speed to get to the tissues, and slower flow speed

The Oral Activity, Pharynx, and Esophagus

∙ The Pharynx, also known as the throat, swallows the food. It opens up

to the esophagus and trachea.

∙ The esophagus is connected to the stomach and transfers the food.

(think of a pipe)

∙ Peristalsis, are rhythmic contractions of muscles that pushes the food.

∙ The movement of materials between compartments are moved  between sphincters, which are known as valves.

Digestion in the Stomach

∙ Digestion in the stomach first starts in the mouth. ∙ The stomach is responsible for breaking down food through acid juices.

These juices are known as gastric juices. The mixture of food digested  and the gastric juice is called chyme.

1. Ingestion: taking in food through the mouth

2. Swallowing food/movement of the food

Digestion in the Small Intestine

∙ Trypsin and chymotrypsin is produced by the pancreas. This neutralizes

∙ In the liver, bile is made. This is stored in the gall bladder. Bile aids in  digestion.

∙     Nematodes, Cnidarians, and Sponges do not have circulatory systems. ∙ Nematodes are so thin that their digestive tract can be used as a

which is also used for their digestion.

system bathes the organs directly and is called hemolymph.  ∙ Vertebrates have closed circulatory systems. The circulatory fluid is

blood and is restricted to vessels.

∙ The pulmonary circulation moves the blood between the lungs and

the heart in vertebrates.

∙ The systematic circulation moves the blood between the heart and

the rest of the body in vertebrates.

rest of the body.

BE SURE TO KNOW THE MAMMALIAN CARDIOVASCULAR SYSTEM 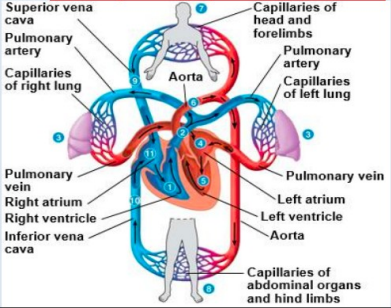 ∙   The 4 layer tissues of arteries and veins: Endothelium, elastic  fibers, smooth muscle, and connective tissue. (The walls are too thick,

cells. (quick exchange of gases and metabolites between blood and

∙   Arteries have thick walls. Have smooth muscle, along with high  pressure and oxygen.

∙   Veins have thin walls. Are not muscular, has low pressure and doesn’t

∙   In mammals, their lungs are filled with sites of gas exchange called

∙   When air is inhaled, it passed through the larynx, glottis and trachea. ∙   Each breath is started by neurons in the respiratory control center. ∙   Neurons stimulate chemo sensitive neurons in the carotid/aortic

What are the different types of savings?

What is the difference between endocrine and exocrine glands?