Description: An overview of Lectures 1 - 9

Lecture One : Introduction to Neuroscience

what is the powerhouse of the cell?

- Neurons are cool. That’s the entire basis of this course!

- The mitochondria is the powerhouse of the cell

- The movement of ions at their electrochemical gradient 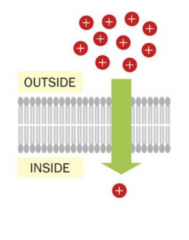 what is the difference between ion channel and ion pump?

- Uneven distribution of ions across the neuronal membrane

what is Voltage-Gated Na+ and K+ channels?

- Allow the passage of ions across the membrane DOWN their

- Transport ions across a membrane at the expense of metabolic

energy (ATP breakdown) which moves ions AGAINST (from

areas of low to high concentration; also called “UP” ) their

- The energy gained from transporting one species down the

gradient is used to transport another species up the gradient

- The movement of potassium releases some sort of

energy and that is sufficient enough to allow the

movement of chloride down its concentration

- The resting membrane potential is set at -70mV because it's closer to the equilibrium potential of potassium. This is because the membrane is more permeable to potassium ions, which means it moves more potassium ions across the channel. Since potassium is a positive ion and it naturally moves out of the cell, we are removing positive ions. If we remove positive ions, the inside is becoming more negative. That is why the equilibrium potential is more negative and the resting membrane potential reflects that.Don't forget about the age old question of Why have cities been connected to the development of civilization, generally?

- So, it's the ion permeability of the membrane that determines the resting membrane potential!

- Once this threshold is reached, we can generate an action

potential. This causes the open voltage gated Na+ channels to

- Voltage gated Na+ channels stay open for less than a

millisecond then inactive, whereas the voltage gated K+

channels stay open much longer as the membrane remains 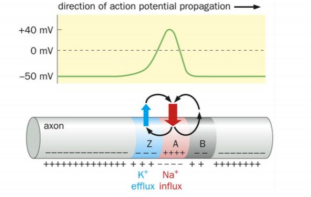 B and forward towards Z). The reason why we don't get the backward

generation is due to the hyperpolarization. We’re making the membrane potential more negative so it’s making it harder to reach the threshold to make an action potential.

- The myelinated portion acts as insulation. If you want to learn more check out csu bmb

- In the myelinated portion we have passive conduction of depolarization which allow the myelin to increase the speed of conduction.

- Just enough energy to reach the next NOR

- In between each myelin sheath is an unmyelinated portion (called the Node of Ranvier).

- In the NOR, we have a lot of voltage gated NA+ channels that are

- The presynaptic active zone is a highly organized structure

- Opens when neurotransmitter binds to receptor

- Inotropic positive receptors use glutamate as the major excitatory

- Faster and movement is made through passive of ions

- Slower due to their structure.

- While they do permeate K+, they are highly permeable to Ca2+

- There is a magnesium block on the inside

- While AMPA receptors are able to just pass ions through,

the NMDA have a magnesium ion that is within the

channel and its the depolarization of the membrane

potential that pops off that magnesium, allowing for the

movement of Calcium and other ions.

- For IPSP, GABA is the main inhibitory neurotransmitter

- GABAa refers to the ionotropic receptor

- GABAb refers to the metabotropic receptor

- Spatial and Temporal Summation of EPSP

- Summing up two different EPSPs form two different branches. As they travel down the dendritic tree to get to the soma, they add to each other. This results in a larger traveling potential.

dendritic tree. This traveling EPSP is adding on to each other. Before the first EPSP ends, the second one builds upon it to add for this continuing traveling of the EPSP.

- This is an EPSP. At -70mV we are at rest. An IPSP is generated and we have this downward deflection of the membrane potential. Were making the membrane more negative!

- This an EPSP where we get a depolarization that allows us to reach threshold. Once we reach threshold, we produce an action potential and go back down to resting membrane potential.

- If we were to add up the EPSP and the IPSP we would not be able to reach threshold to reach EPSP because they would cancel each other out.

- The major thing is that metabotropic receptors are G protein coupled receptors. G protein means that they are trimeric (have three subunits : alpha, beta, gamma).

- Once we get the ligand to bind, we get this association of the G

protein exchanging the GTP for GDP

- This activates the G protein complex. This allows beta

gamma to dissociate and bind to or directly influence the

target protein (usually an ion channel). We also have the

- As an excitatory neurotransmitter binds to serotonin, the serotonin

receptor is inhibiting the transmembrane potassium protein channel. If it

prohibits the potassium from flowing out, were not hyperpolarizing the

cell because we're not losing ions to the outside thus, inhibiting the release

- Presynaptic Inhibition (for example from a GABAergic neuron)

receptor because it is metabotropic receptor. GABAb takes up the GABA

neurotransmitter and we excite the potassium channels to allow the

outward movement of potassium. At the same time, we are inhibiting

calcium channels to enter the cell allowing neurotransmitters to be

- Mechanotransduction in the hair cells

- Mechanotransduction - the conversion of a chemical signal to an electrical signal - Hair cells are found in the inner ear and they have these things at the top called stereocilia. Stereocilia are attached together via tip link proteins. So, at rest they are pointing straight up but because they are attached at the top to the tectorial membrane, when the cochlea vibrates that allows a shearing mechanical force. If we are moving the tectorial membrane and the stereocilia are attached, when they move it causes a bending force that moves the tip link proteins and opens up the channels at the top of the stereocilia.

- These channels open because there is a higher concentration of potassium outside of the cell in the endolymph, which is extracellular space.

influx of calcium channels we get neurotransmitter release, mainly

glutamate. This signals the auditory signal

- This is an exception to the movement of potassium ions.

- Sound frequencies are represented as tonotopic map in the Cochlea

- The tonotopic map tells us where we vibrate along the cochlea

- At the base of the cochlea the physical properties are thinner and more flexible which allows it to vibrate at higher frequencies. As we move along the cochlea and get to the apex in the middle, the physical

characteristics become more thick and rigid which allows it to vibrate at lower frequencies.

- Organization of the Somatosensory System

- In the skin and muscle fibers, we have receptors that receive a signal that gets transported to the dorsal root ganglion (a collection of cell bodies in the PNS ; sits right outside of the nervous system). Once we reach the spinal cord on the dorsal side, these different type of nerve fibers synapse at specific region within the spinal cord. This is HIGHLY organized.

- This is proving that the Piezo is necessary to transmit a signal during some sort of physical stimulation.

- Respond to cold or chemical stimulus

- Responds to different types of pain and temperature stimulus

- If you put both channels together, they respond to everything

- Olfactory Transduction pathway and its regulation

- The olfactory sensory neuron receives an odorant. It’s associated with the alpha subunit g protein (G��olf). Once this g protein gets activated it

dissociates and cyclic AMP (cAMP) is involved and it indirectly 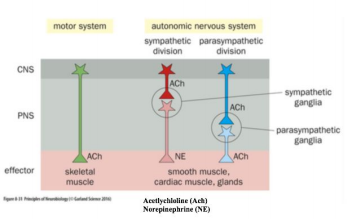 - A more direct pathway from the CNS to the effector 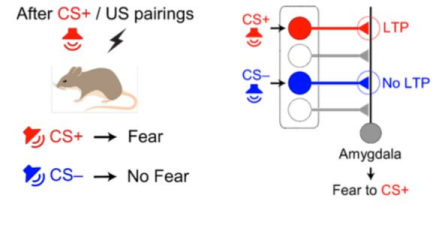 - Input - specific LTP in Discriminative Fear Learning (IMPORTANT!!) - This is saying after we have paired the conditioned stimulus and the

- The fear response is discriminative towards certain tones.

- CS+ : The conditioned tone is going to induce LTP