UNIVERSITY OF CENTRAL FLORIDA / Psychology / PSB 3002 / Who is byron peterson?

∙ Many functions are performed half on one side, half on the other ∙ These two halves usually work together

∙ Split brain patient Joe can draw with his left hand what is presented to the  right side of his brain, but can’t name it

∙ When talking about language and lateralization, it’s easy to see everything  from the human point of view (language, writing, reading), but humans are  not the only lateralized species.

Who struggle initially with syntax, but understands meaning?

o We have more language capabilities than dolphins, or is the most  extensive/advanced, but we aren’t the only species that uses some sort of vocalization/sound for communication.

o It’s tempting to think of the left hemisphere doing language, because  that wouldn’t apply to other animals.

∙ The cortex determines the intention to do something, but is up to lower brain areas to turn that into action 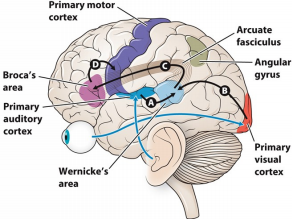 What is the non-invasive treatment for aphasia?

Wernicke’s area is one that puts things together, synthesizes them

∙ Is a multimodal area, not just auditory

∙ Semantics deal with meaning of a communication

∙ Syntax is about the rules of language

∙ Used as treatment for aphasia

o Suppressing an area can be therapeutic

o Functions of cortex are silent

Byron Peterson – look what he does right

∙ He has good syntax, but semantically his brain doesn’t understand what is being said

Sarah Scott – struggles initially with syntax, but understands meaning  (semantic) We also discuss several other topics like What is wien's law?

∙ A bit slow and must think about what she’s going to say, but otherwise, normal and great recovery

Non­human primates have a Broca’s area too

Damage to Broca’s region leads to diminished ability to express language, is  a close proximity to premotor cortex

Broca’s area does not control/innervate the vocal cords

∙ Cranial nerves 9 and 10 innervate the speaking aspect of vocal cords ∙ Moving the vocal cords happens not just when we speak but when we  breath, swallow, or anything involving movement of the larynx or  pharynx

BUT when you stimulate a rhesus monkey’s cortex long enough, you  produce purposeful movements of the arms and hands

∙ All starting positions end up in around the same place.

Don't forget about the age old question of What is hallucinogens?

Broca’s area is widely recognized to be important for speech production, but  its specific role in the dynamics of cortical language networks is largely  unknown We also discuss several other topics like What are the differences between secular and political time?

∙ Contrary to classic notions of this area’s role in speech, our results  indicate that the Broca’s area does not participate in production of  individual words, but coordinates the transformation of information  processing across large­scale cortical networks involved in spoken  word production, prior to articulation (because there’s something else  doing the articulation)

Broca’s area is not species specific

∙ Non­human primates possess cortical areas in similar locations and  have areas homologous to Wernicke’s and Broca’s areas in humans ∙ In both species, the region represents non­linguistic hand and mouth  movements

∙ Both species may have mirror neurons in this region that are involved  in understanding the actions and intentions of othersDon't forget about the age old question of What is behaviorism theory?

o In both species, the region is likely involved in producing  orofacial expressions and in understanding the intentions behind  expressions of others

o In humans, it has evolved an additional communicative function  (speech production)

o Connection between rhythm of music/dance with rhythm of  speech, internalize the rhythmicity

∙ Don’t stammer when he swears

o Swearing is more emotional, therefore, is connected to the right  hemisphere

∙ Connection between forced hand switching and stuttering has largely  been forgotten

∙ Stuttering tied to disturbed signal transmission between hemispheres ∙ Connections between stuttering and weak laterality  If you want to learn more check out What is elasticity of demand?

∙ Dr. M thinks there is a connection between Broca’s area and stuttering ∙ Blood flow is reduced in the Broca’s area of those who stutter

∙ Some who can’t walk but can dance

∙ The power of music

∙ Uses music to improve speech and other movements

What is bacterial flagella?

What is the formula of magnification?