UW / Astronomy / ASTRON 103 / Can astronomers deduce fingerprints for an element?

From a spectrum, astronomers can deduce:

∙ The familiar pattern of lines (fingerprints) for an element (ex. hydrogen) ∙ The measure of the observed wavelengths of the lines

∙ And then compare with the known laboratory wavelengths (aka rest wavelengths)

­measure of how energetically atoms are moving about

∙ Low temperature = atoms not moving around much

Diffuse Gas: We also discuss several other topics like What is the net number of atp produced in glycolysis?

­in a diffuse gas, the individual atoms are so spread out that they don’t influence one another appreciably

How is thermal spectrum produced?

∙ Atoms do still collide, but photons are emitted and absorbed at discreet wavelengths corresponding to the difference between atom’s energy levels just as if we had an isolated atom

­stars have very hot stellar interior through which photons diffuse

­when they eventually escape, photons produce a continuous thermal spectrum

*Spectrum of thermal radiation depends only on temperature * 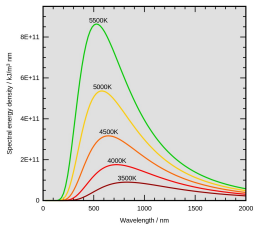 How is apparent brightness measured?

­more flux at all wavelengths

­peak of spectrum moves to shorter wavelengths  Don't forget about the age old question of What were used as subjects for medical education during the 18th century?

­higher the temperature, the higher the peak on chart

­also known as a blackbody spectrum or Planck curve

­wavelength at peak determines the color of the star

∙ Ex. if a star peaks at red, the color of the star looks red

What is a Blackbody?

What happens to energy deposited in a blackbody by incident radiation? ­blackbody heats up

∙ Does not heat up to infinite temperatures

Rate at which is absorbs energy = rate at which it radiates energy  ­then reaches an equilibrium temperature  Don't forget about the age old question of Is anemia considered poor immune function?
If you want to learn more check out What are the effective communication skills with hearing people when it comes to family situations?

­thus, shape of emitted spectrum depends only on temperature

Spectrum of a Human

­what a human emits can be approximated as a blackbody with T ~ 300 K ­how do we see each other even though we don’t generate visible light?

­thermal emission that we emit, peaks at infrared (~10 micron)

­reflected visible light from some other blackbody

∙ Measured in watts per m2

Spectrum of the shape and spectral lines is affected by

­surface temperature Don't forget about the age old question of What is the structure of the amygdala?

Magnitude system:  Don't forget about the age old question of When was the roman empire united by constantine?

­not a measure of the luminosity (in watts) of a star

∙ Star could be dim but close, or luminous and far away and have the same apparent  brightness

­apparent brightness, or flux, is the amount of energy reaching each square centimeter of a  detector every second

­for a sphere of radius 2r, energy covers a total area 4 times larger

­energy released if the nucleus is formed

­releases a photon that carries away energy

­when nuclei get bound to each other

­most of generated energy in form of gamma rays

­converted to optical photons as interact with matter on way out from center of Sun  ­journey for a photon through Sun ~170,000 years

Sun has a huge Fuel Tank:

­Sun will shine for ~10 billion years

­end of life when H is exhausted

­converts ~600 million metric tons of H into He within its core every second ­since only 0.7% of this mass is converted to energy, most of mass of Sun stays the same  ­but, every second, there is 600 million tons less H in Sun’s core

In different stars, pressure can be provided by:

­radiation (in stars hotter than Sun)

­energy generated by nuclear reactions in core of Sun is in form of light that bounces around  inside Sun for a very long time before getting emitted by surface of Sun  ­Surface not solid – rather, an apparent surface from which photons appear to radiate

∙ Somewhat grainy: bright granules are fountains of hot gas upwelling from interior  ∙ After releasing its heat, gas is cooler and denser and sinks back down (darker because  less light emitted per unit area)

­chromosphere is a thin, red layer immediately above photosphere

Why is Chromosphere Red?

­chromosphere most easily seen at beginning and end of totality of a solar eclipse  ­numerous vertical spikes, or jets of rising gas called spicules

­Sun’s differential rotation, along with convection in photosphere, stretches and tangles the  magnetic field lines, like an unruly ball of string

­where tangled magnetic fields lines break through photosphere, a large amount of magnetic  energy is released

­sunspots are places where Sun’s magnetic field is escaping

­Some can be seen with naked eye, much larger than Earth

­number of sunspots rises and falls on an eleven­year cycle

­solar maximum is characterized by a large number of other phenomena, such as solar  prominences and flares

­related to magnetic field of Sun

­thus, period of solar activity cycle can be thought of as 22 years

Further out from chromosphere is the corona, a large, low density envelope of very hot gas,  which you can see during a total solar eclipse

­as atoms hit each other, they knock all or most of electrons out (how ionized the gas is tells us  the temp)

­corona much more highly ionized than photospheric or chromospehric gases

­enormous eruptions from the photosphere of Sun

­huge concentrations of energy are emitted from a very small region

­ionized gas from the chromosphere

How does fusion occur?

­almost zero chance of 4 protons colliding at same moment to create a He nucleus; fusion occurs  in three steps

­focus on conversion of a proton into a neutron, a positron, and a neutrino

­an anti­electron – like an electron but with a positive charge

∙ can zip through Sun unimpeded (about 2 s)

­hard to catch; can pass through a light­year of lead before being absorbed or scattered ­give conditions right now in center of Sun

­in quantum mechanics, one cannot predict with certainty the outcome of one observation ­instead, the probability of the outcome is predicted

­if all neutrinos had no mass, there would be no neutrino oscillations

­we observe neutrino oscillations, so at least two have mass (neutrino revolution)

∙ still not known whether lightest neutrino has a non­zero mass

Resolution of the Solar Neutrino Problem

­fermions are individualists, only one of a kind in a given place with a given velocity

This matter, because if we try to crush a gas of fermions together, a new quantum mechanical  pressure – degeneracy pressure­ resists the squeezing

Degeneracy pressure is related to the uncertainty principle, which can be written as

At very high densities, fermions have a small delta x, so to compensate, they must have a large  momentum or velocity

­evolution of stars is controlled by two factors:

Can release energy via fusion all the way up to iron, the most strongly bound nucleus

BUT, each step to heavier elements releases less energy than the last

∙ evolution of stars speeds up once core hydrogen runs out

­fusion is opposed by electric charges on the nuclei

Mass increases along direction of arrow: main sequence is a sequence of mass ­with higher mass luminosity increases rapidly

­consequences of L going as M3.5 severe for massive stars

­although they have more fuel to burn, they consume it at a disproportionately rapid rate 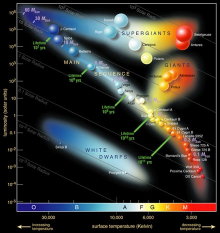 Evolution of stars is controlled by two factors:

­Basic idea: once on source of fuel used up, takes a little while for next set of fusion reactions to  get going

­core has to contract a bit

∙ Next fusion can start

­during these contraction phases, the star grows

­after core exhausts its H, it will be made almost entirely of He (the “ash” left behind) ­thermal pressure in inert (non­burning) He core too low to counteract gravity, so the pressure  fighting against gravity is electron degeneracy pressure

­gravity shrinks both inert He core and surrounding shell of H

∙ So hot that H shell burning proceeds at a much higher rate than did core H fusion  ­a MS star’s thermostat regulates the fusion rate:

∙ An increase in fusion reactions causes pressure in core to rise

∙ This causes core to inflate and hence cool; resulting in a decrease in fusion reactions  ­in contrast, thermal energy generated in H burning shell cannot inflate inert He core to cool it  ­instead, H burning shell shrinks along with core, growing hotter and dense, causing fusion  reactions in shell to keep rising

­increase in energy output due to H burning shell (i.e. star has a higher luminosity than when on  MS) causes a buildup of thermal pressure inside star, which pushes surface outward  ­due to expansion of outer layers

­energy produces spread over a much larger surface area

∙ Results in a lower surface temperature and redder color

∙ Do not stay red giants for long

­eventually, He core reaches T where two He nuclei can bash together to form a Be nucleus (4  protons and 4 neutrons) (helium fusion)

­this form of Be unstable and rapidly breaks back into its constituent He nuclei, unless another  He nucleus shows up

­then that He nucleus can bash into Be nucleus, forming a stable C nucleus  ­releases energy

­need high T to get two He nuclei to bash together (~100 million degrees, compared to 10­20  million for H fusing)

4) causing them to fuse faster

­small in radius, about size of Earth, because exposed cores of dead stars  ­often hot, because some only recently in center of a star and not had time to cool  ­as long as no mass is added, gravity and electron degeneracy pressure remain balanced  indefinitely

As Process moves Forward in Time:

­recipient star transfers some of its matter back onto white dwarf (paying back what it stole) ­ Flowing matter has some rotation, law of conservation of angular momentum says it must orbit faster and faster as it falls toward the surface of the recipient star: called an  accretion disk

­in frame attached to an object

∙ Object not moving and not rotating

­frame can be moving with some fixed velocity

∙ Such a frame is called an “inertial frame”

­no experiment you can do in a uniformly moving plane will answer “am I moving?” “In what frame of reference are the laws of electromagnetism (Maxwell’s equations) valid?”

­requires radical restructuring of notions of space and time

Einstein proposed 2 postulates as basis for his theory:

1) principal of special relativity: laws of physics are the same for all observers in uniform motion 2) constancy of speed of light

Einstein’s relativity is both conservative and radical:

­radical because radically alters our notions of time and space

­special theory of relativity is more than a theory; it has been verified and is unlikely to be  refuted

­why is it impossible to go faster than light?

Can visualize relative nature of time using a “light clock”

­flash of light leaves source, bounces off mirror, and returns to source, triggering another flash ­process

Time dilation factor appears often in relativistic calculations; always between 0 and 1  ­when v=0, factor is 1 and clocks behave normally

What building type is madrasa?

Is server a type of computer?