Course: Introduction to Evolution and Ecology

Description: This study guide covers the ecology portion of the second midterm. 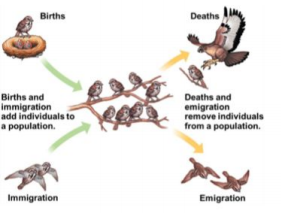 *If immigration and emigration are ignored, a population’s growth rate (per capita increase) equals birth rate minus death rate

What curve is produced by the logistic growth model of population?

i. The parameter r is the instantaneous per capita rate of increase (r ins in the text)

1. r tells us at any given instant right at this second how fast the

a. Per the # of individuals that are already in the population.

Given the # of individuals here, what is the chance of the

divided by the number of individuals. Don't forget about the age old question of What does iconography connote in the field of sculpture and art?

What are the different mechanisms of competition?

r = (b-m)n , this represents the population change over time

RNBN ND Don't forget about the age old question of How do we reconstruct what happened during the k/t event?

ii. The balance of births and determines r

1. b = the instantaneous chance that an individual will give birth. If

this value is high, this means there are individuals reproducing or

2. m = the instantaneous chance that an individual will die

(b )N rN ; this means individuals are being dt born and dying at the same time

* In an open population, you would include immigration with births ( = gains per capita) and emigrants with deaths (= losses per capita) If you want to learn more check out What is the formula of a slope?
Don't forget about the age old question of If accumulation is more significant than ablation, what will happen at the front of the glacier? 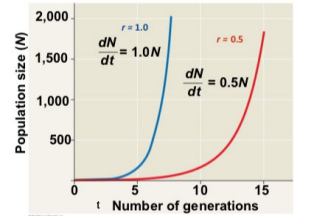 Graph : dN/dT increases as population size increases. This means the growth accelerates which is why we have a J shaped curve!!

- If r, the instantaneous per capita rate of increase, is constant, the population grows exponentially

- r < 0 - more deaths than births so the population is declining

ΔN = 0 If you want to learn more check out Where in the brain is the somatosensory cortex located?

i. Exponential growth cannot be sustained for long in any population 1. In unmanaged populations there are a host of factors that will

cause individuals to stop reproducing or die. This causes the

population growth to be limited.

ii. A more realistic population model limits growth by incorporating carrying capacity (K), which is the maximum population size the

1. So there is going to be a point at which the population is growing

stop growing. This number at which the population stops growing

is the carrying capacity of the environment

b. The Logistic Growth Model

i. Starts with the exponential (r) model and adds an expression that reduces the instantaneous per capita rate of increase as N approaches K

r = ; determines the fraction of the carrying capacity of the population K ii. The instantaneous per capita rate of increase under logistic growth is (K−N) 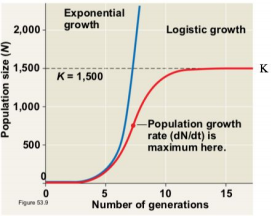 i. As the population size gets bigger, the growth rate is starting to slow down and eventually levels off at carrying capacity.

i. The growth of laboratory populations in constant environment lacking predators but with limited food

ii. Paramecium : The most common way these protist reproduce is by splitting itself in half and it does this about once a day. Let's say at Day 0 we have 1 paramecium. By Day 6, we have 64 paramecium which means its full. When is the paramecium population half full? Day 5! This is the power of exponential population growth. Each day the population is 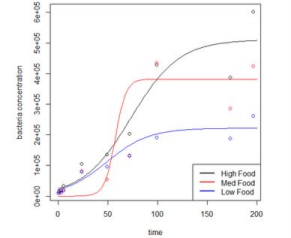 1. As the population gets more crowded, meaning the density

increases, the population decreases. This is referred to as negative density dependent. This is a negative effect! 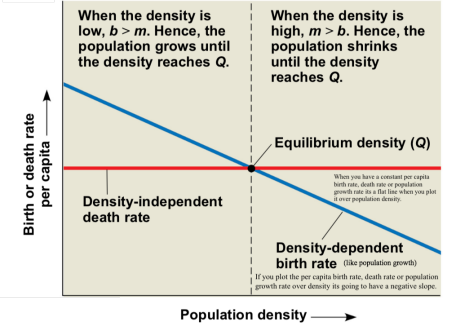 i. Be able to tell if the population is density dependent or density

independent through the given curve!!

a. Community : an assemblage of species living in close enough proximity for potential interaction

i. Communities have emergent properties such as species, diversity, tropic structure and stability over time

b. Mechanism of Interaction

i. Mechanisms of Competition

3. Competition between ecologically similar species can lead to

4. Differentiation in resource can allow similar species to coexist in a

community. This is called resource partitioning

i. Mechanism of Consumption

1. Predation - a predator species kills and consumes the prey species

2. Herbivory - herbivores eat parts of a plant or algae

3. Parasitism - parasites live in or on their host for an extended period

a. Symbiosis : species live in direct and intimate contact with

2. Lynx increase due to abundant hares

3. Hares decline due to predation, starvation

4. Mechanical and chemical defenses protect species such as

a. Structural / physical defense : the way an organism looks

can also be an important part of the predator/prey

coloration). This can warm the predator that their

animal to blend in with their surroundings and hide

1. An interaction in which one species has positive effects on another

a. The assembly of communities results from multiple processes

i. The species diversity of a community is the variety of species that make up the community (How many species there are in a given community).

There are two patterns of species diversity :

1. Species Richness : the TOTAL number of species in a community

2. Relative Abundance : the proportion of each species represents of

all individuals in the community (evenness)

ii. Example : Which forest has a higher species diversity?

1. Two communities can have the same species richness (number of

a. Relative abundances are more equal in community 1 than

1. The Simpson’s diversity index (D) where P is the relative i

abundance of species i, and S is the number of species

a. A food web is branching food chain with complex trophic interactions

a. Communities with higher diversity are :

i. More productive and more stable in their productivity

ii. Better able to withstand and recover from environmental stresses

i. The species - area curve quantifies that idea that, all other factors being equal, a larger geographic area has more species

1. Larger areas tend to have higher colonization rates and lower

ii. The species - area relationship can be described mathematically

i. A disturbance can be any given event that changes a community by removing organisms from it or altering resource availability

1. Disturbances vary in both frequency and intensity

2. Species diversity may be maximum at intermediate levels of

What shifts the demand for bonds?

How did the archean cratons or shields form?