Description: -Brief introduction to supply and demand (just demand for this week) -focus on the Law of Demand and Demand Curves -also look at real world ramifications of understanding demand curves and the mechanics behind demand

1. The Law of Demand

a. When the price goes up, the quantity demanded goes down

b. If the price of a commodity (i.e. carrots) goes up, people want less carrots i. This is proven after examining a set group of people over a set period of time

c. There are no exceptions to this Law, possible exceptions occur when other factors beyond price change

1. This is extremely rare

2. The price does increase with demand, but so does the consumer We also discuss several other topics like How do you identify an ionic compound?

perception of the car, thus it is affected by factors beyond the Don't forget about the age old question of What organization was the largest contributor to the first earth day?

scope of the Law

2. Why you should believe the Law of Demand

a. Logically, if something increases in price you are incentivized to not buying it 3. Graph of the Law of Demand

How does the graph illustrate the law of demand? 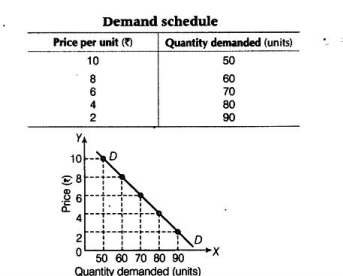 b. The line “D” is called the “demand curve”

i. Demand curve is a function

iii. Keep in mind that the curve is not always straight, can be curved

c. Curve can be steeper or shallower

i. The steepness or shallowness demonstrates the commodity’s sensitivity to price

1. The more steep means the less sensitive, the more shallow

How does a demand curve work?

Don't forget about the age old question of What do data mean?
We also discuss several other topics like What is hebrew society composed of? 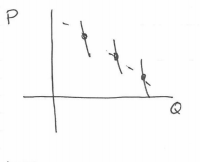 4. The law is often extended by economists beyond economics

a. Car accidents Don't forget about the age old question of What term refers to a strategy to increase accuracy of a direct assessment?

i. price=probability of dying per unit or recklessness If you want to learn more check out What is the dilution effect?

iii. The assertion is that the higher price (injury or death) leads to less reckless driving

b. Further point on car accidents

i. Price of reckless driving has gone down a lot due to technological advancements (shatter-proof windows, skid control)

deadly now than it was then

ii. Professor Peltzman found that the demand curve flattens out by A LOT 1. Because of safety measures like seatbelts, people drive more

2. Thus the same number of people die in the end, in fact safety measures do little to reduce the number of deaths

3. Number of pedestrian deaths do go up, since they don’t have improvements to safety equipment and since drivers go more

1. Seatbelts do not do much to lower reckless driving

2. However, safety measures do reduce the price (lethality) of

3. Pedestrians lose in the end

4. This also applies to NASCAR

a. Tons of safety measures are put in every year

b. Racers drive faster and faster after each new measure

c. More members of the pit crew are injured

5. Just saying “seatbelts do no good” misses the point

things (i.e. getting to work on time)

iv. This sounds crazy, but you can turn around the assertion in the phrasing 1. “If you wear a seatbelt, you drive more recklessly”, this sounds ridiculous

2. “If you don’t wear a seatbelt, you drive more carefully”, this sounds like common sense

i. price=probability of being executed

1. Measured by number of executions per year

iii. This is a point of interest as this examines if capital punishment has a deterrent effect on murder

i. Professor Ehrlich found that the demand curve for execution and murder was incredibly flat

1. For every 1 execution there was 8 less murders

ii. Ehrlich’s study was seen as crazy and an incorrect assertion based on bad data

1. However every recreation of the study yields numbers around

3. Even these strange numbers hover around Ehrlich’s number of 8

1. It proved the efficacy of capital punishment

2. Interestingly, Ehrlich was against capital punishment and

advocated for its abolition

v. Sociologists actually find that the effect is much smaller than Ehrlich’s study, why?

1. Economists and sociologists are both right but ask different

a. What is the effect of increasing the number of executions?

b. The answer: a large decrease in murder

a. What is the effect of passing a capital punishment law?

b. The answer: a very small decrease

a. When something other than price changes, demand as a function changes and the curve moves

b. A change in price can simply be accounted for by looking at the given curve c. Ex

i. Movement to the right is an increase

ii. Movement to the left is a decrease 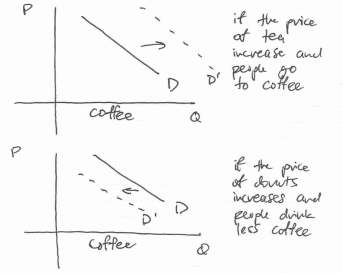 a. Demand curve answers the question of how much demand there is, not how much one can get

What molecules does the endocrine system release?