Description: This includes chapter 2,3,4 which are going to be on Exam 1

A system where powers are shared by the state and the national government.

● Federal System: A system where powers are shared by the state and the national

● Federalism: The state and the national government have powers delegated to both as well as  share powers together

­ Prior to federalism, the Confederal System was in place.

­ Confederal System → Each state has its own money and way of

regulating congress, this was under the Articles of Confederation

­ Articles of Confederation → a set of laws that created a weak

central government and did not have enough power to rule and

­ Annapolis Convention → The meeting was held in 1786 in order to

revise the articles of confederation which led to the convention

Who is David Whitley?

If you want to learn more check out What is federalism and how does it work?

­ Constitutional Convention → in 1787 the state representatives got

branches (Legislative, Executive, and Judicial) which happen to be the

first 3 articles of the constitution.

­ Upon drafting the constitution, there was dispute of federalists’ vs

bill of rights in the constitution before it was official. The federalist newspapers

required 2/3rds of the states to approve the act.

This is a table of the way that powers in the United States government are laid out to states in the US  and federal government. This also is a representation of how our government runs today under the  constitution, the supreme document of the land.

What are the ballot types used in general elections?

Expressed/ Don't forget about the age old question of How is deterrence different from defense?

Government by the constitution

Powers that are directly stated in the constitution

essentially up for interpretation in the constitution,

congress and the president mostly for national

Powers that are reserved to the states

Powers shared by the national and state

directly expressed but implied that the national If you want to learn more check out What is Aspirin?

government has an indirect authority

agreement for the betterment of the

● McCulloh vs Maryland → Court case about how 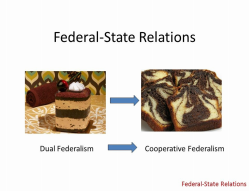 McColloch (owner of the 2nd bank) refused to Don't forget about the age old question of What is amicus curiae?

pay taxes (as the bank) to the state of

disagreed → defined the Necessary and Proper

that congress had to regulate interstate

→ Article 6: Clause 1: Debt that existed before

the constitution, is still valid after the

constitution. Clause 2: The government may do anything it deems necessary and  proper in order to uphold the constitution and the land. Clause 3: All judges and

government officials swear oath to the country, constitution, and loyalty to its laws. Don't forget about the age old question of Phytochemicals

­ Dual Federalism → The state and national government have separate powers,

­ Cooperative Federalism → the state and national government have powers

states and starts in the national government is hazy

­ Madison and Jefferson took different sides as individuals though  If you want to learn more check out What are the four types of law?

­ Madison → Interposition (states interpose itself between the

national government to object a law)

­ Plessy Vs Ferguson → Plessy was fighting the unconstitutional laws in place  that did not allow whites and black to be in the same train, this is when he  sat on the whites only train and was convicted. He lost the case and was  convicted as the supreme court then ruled for the Separate but Equal  doctrine.

­ Categorical Grants → telling the state exactly what to do with the  grant and the state has no say in how the grant in spent in the state.

­ Block Grants → state has the most control over how to spend the  government money given to them.

already has authority to do

­ The Incorporation Doctrine → is a constitutional doctrine that states that the Bill of  Rights are applied to the states through Due Process and 14th Amendment. (Prior to  this, the BOR was only applicable to the Federal Gov. and Fed. court cases)

­ Selective Incorporation → SCOTUS incorporates certain parts of certain amendments,  rather than incorporating the entire amendment (e.g. the 9th and 10th amendment is not fully there, plus SCOTUS rarely relies upon the 9th amendment to settle cases, this avoids a lot  of problems when dealing with court cases)

­ Section 1: “Full Faith and Credit shall be given in each State to the public Acts, Records, and  judicial Proceedings of every other State. And the Congress may by general Laws prescribe the  Manner in which such Acts, Records and Proceedings shall be proved, and the Effect thereof.”

­ Section 2: “The Citizens of each State shall be entitled to all Privileges and Immunities of  Citizens in the several States.”

­ These clauses protect the rights of recognizing other states laws in other states (e.g. same sex  marriage laws decided by the states (like having a significant other as the same sex and then  going to another state that pronounces that as illegal to do in their state, the couple has their

rights protected because the state must recognize that they are not from the state they are in  now.)

● Origins of the Constitution

­ Originally, Texas used to be a part of Mexico, so a lot of values from Mexico and the US when  Texas became a state, clashed.

­ Clergy were not allowed to hold office in Mexico

­ Texas denied freedom rights for slaves (unless the legislature approved)

­ Mexico had a very powerful executive who abused his power more than used it for  good, so Texas tried to avoid that by making a weak executive for the state to run

smoothly and be less corrupt.

­ Sam Houston → led troops to the Alamo and lost against Mexican forces, later ambushed Mexican troops at San Jacinto and won, officially declaring Texas  as part of the US and not Mexico.

­ Remaining citizens elected Sam Houston to be the governor of Texas

­ The Executive Branch is no longer appointed

­ Limited the debt states could have

economically out of hand.

­ Limited the power of executive as much as possible

­ Giving the mentally ill a chance for a proper jury trial

­ NO monopolies (The Granger movement succeeded)

­ Prohibits garnishment of wages (except if owed child support)

Checks and Balances & Separation of Powers

­ Creation and passing of Bi

­ Residing in the state for 5 years and district 1 year

­ Resided in the state for 2 years and District for 1

­ Other agencies are appointed by the governor

­ ⅔ support from senators to appoint (and to fire)

­ Under courts of final appeal

­ County judges and justices do not need to be lawyers

­ Runoff primary → if no one wins the majority, this is how they break  the tie

­ Restrictions that used to be in place that restricted voting

­ Longer residency requirement in the SMD

­ These Amendments helped develop the voting process the way it is today:  ­ 15th Amendment → eliminated discrimination of race based on color,  race, or ethnicity.

­ (Age) Ties back with education, those with a higher education tend to vote more ­ Political Efficacy → The belief that people have actual influence in  their government’s actions.

­ Direct Primary:  a method of selecting nominees from a political party where party  members elect candidates who represent them in general election

­ Filing fee: 5k Signatures and 2% of votes cast in last election for the candidate’s party in governor’s race (>500)

­ Determine the order of names on the ballot

Voters can participate in their respective districts

Requires a plurality of vote to move on

20% or more votes to participate in elections

After if needed is a runoff election

Varies per state when they are held

­ Used to ratify constitutional amendments or to fill a vacancy

­ Non­partisan elections so no primary and majority vote is required

Chair of democratic and republican parties

Authorizes payments of all election expenses

(Everything else from Option 1 still holds true)

­ Office Block Ballot → offices are listed across the top of the ballot  ­ Party Column Ballot → candidates from each party are listed in parallel  columns (will be abolished after 2020 to promote research on candidates  instead of “blind voting”.)

­ Incumbency (someone/position who is currently in office)

­ NO LIMITS on the amount of money raised

­ Candidates and PACs may not accept cash of more than $100 but infinite in checks is  approved.

­ Direct contributions from unions or corporations are forbidden

­ Candidates ad treasurers are required to file all contributions

What is the definition of Pathogenic?