Description: Study guide: Macroeconomics Chapter 8: GDP and its measurements - Definitions - Concepts - Questions you should expect on the exam - Exercises with solutions ( step by step )

What is Economic growth?

○ the study of the economy as a whole, including topics such as inflation, unemployment, and economic growth.

- In macroeconomic analysis, economists study factors that affect many markets at the same time.

■ a period during which total production & total employment are increasing.

■ a period during which total production & total employment are decreasing. ● Economic growth

● Fluctuations in the total level of employment in an economy

○ In the short run, the level of employment is significantly affected by the business cycle

○ In the long run, the effects of the business cycle disappear, and other factors determine the level of employment.

● Fluctuations in the inflation rate

○ the % increase in the average level of prices from one year to the next.

○ It affects both by the business cycle and by long-run factors.

● Linkages among economies in the form of international trade & finance.

○ the market value of all final goods & services produced in a country during a period of time, typically one year

■ Does not include the price of used (for production ) goods

● Bureau of Economic Analysis in the Department of Commerce compiles the data needed to calculate GDP.

○ A good/service purchased by a final user

● Intermediate good/service: Don't forget about the age old question of which hlc group is basically the unmarried members of the generation yers?

○ A good / service purchased that is an input into another good

What is the Financial system?

There are 2 main conceptual ways to measure the total economic activity in an economy: ○ total production & total income

The Circular Flow and the Measurement of GDP 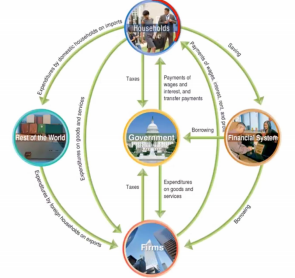 ○ When households buy goods & services from firms in other countries

○ Firms that deal specifically with flows of money

■ Changes in the stocks of goods

● [!] Spendings on transfer payments are not included

○ Spending by households on goods/services, not including spending on new houses (counted instead in investments)

○ In BEA statistics: consumed goods can be divided into 3 groups:

● a product which is intangible (in contrast to good)

■ Non-durable goods: Don't forget about the age old question of what is lipids?
We also discuss several other topics like mgmt 402

● a good that lasts less than 3 years

● Physical assets, such as:

○ Does not include transfer payments, as those do not result in immediate production of new goods and services

○ Is the largest component of GDP

Shipping Don't forget about the age old question of econ 421

● What is the value added in individual stages of production?

● What is the total value added

o Production performed by citizens of a nation including overseas production

Ex: even if the citizen owns a factory taking place abroad, it will count towards GNP

o Depreciation will always be less than GDP

a. Common in developing countries