USA / Chemistry / CH 131 / What are solubility, solubility rules, and electrolytes?

What are solubility, solubility rules, and electrolytes?

What are solubility, solubility rules, and electrolytes?

Description: This study guide will cover Chapters 4 and 5, which is the material on Exam 2. This study guide was specifically designed for students in Jennifer Coym's CH 131 class at the University of South Alabama. Access to this study guide is vital to the success of the student on Exam 2 as well as success in the CH 131 course.

What is solubility, solubility rules, and electrolytes?

1. What is Solubility, Solubility Rules, and Electrolytes?

1) Not conductive = no light in the lightbulb

How to write atomic structure and lewis structures?

b. Molecular Compounds in Aqueous Solutions

1) When molecules dissolve in water, they disperse throughout the solution 2) An ACID when dissolved in water, dissociates into protons (H+ molecules) 3) Neat acids exist as molecules but dissociate like ions in aqueous solutions 4) Neat = pure (no water in it)

3) Weak electrolytes do not dissociate completely (CH3COOH) (acetic acid) 4) Weak acids are also weak electrolytes (MAKE SURE TO MEMORIZE STRONG  ACIDS) Don't forget about the age old question of What is stated by the law of supply?

d. Weak vs. Strong vs. Soluble

What are molecular equations?

If you want to learn more check out How do microbes uptake nutrients?

i. Insolubility rules are based on the chart of insoluble

ii. ANY COMPOUND WITH (NH4+) (ammonium ion) WILL

• A NONELECTROLYTE may dissolve in water, but it does not dissociate into  ions when it does so (STAYS NEUTRAL)

• When an ionic substance dissolves in water, the water pulls the individual  ions from the crystal and hydrates them

• THIS PROCESS IS CALLED SOLVATION If you want to learn more check out What does normative theory mean?
We also discuss several other topics like The first step in strategic planning involves what?

• A precipitate is an insoluble solid formed by a reaction in solution • When one mixes ions that form compounds that are insoluble (as could be  predicted by the solubility guidelines), a precipitate is formed

• STUDY THE CHART IN THE CHAPTER 4 POWERPOINT

EVER SEE NO3 OR C2H3O2 THEY ARE ALWAYS SOLUBLE

A MAJORITY OF CLORIDE IS SOLUBLE (AG AND PB AND HG) LEARN SULFATE (SO4) HAS (SR, BA, HG, AND PB) Don't forget about the age old question of Where was the tango born?

NH4 WILL ALWAYYYYS BE SOLUBLE

• Metathesis comes from a Greek word meaning "to transpose"

• All strong electrolytes (strong acids, strong bases, and soluble ionic salts)  are BROKEN DOWN INTO THEIR IONS

• Those that are deleted are called SPECTATOR IONS

• KEEP THE CHARGES IN THE NET EQUATION

4. Write the net ionic equation with the species that remain (WERE  CHANGED) We also discuss several other topics like Define biological evolution and some mechanisms that drive it.

• Monoprotic, diprotic, etc. (DEPENDING ON HOW MANY HYDROGENS THERE  ARE)

• ACIDS CAN BE SPOTTED BY THE HYDROGEN WRITTEN FIRST

• THE ACID DONATES A H+ ION TO THE BASE 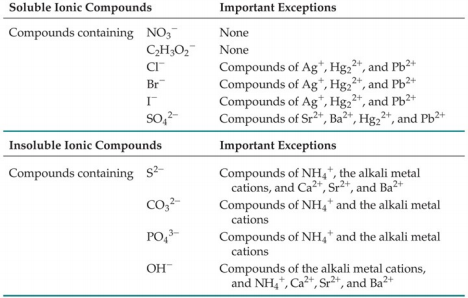 a. How to write Atomic Structure and Lewis Structures?

How can you tell if a protein has been extruded into a microsome from an mrna encoding secretory protein?

When the body is in anatomical position, the palms face towards the front of what?