TAMIU / Earth and Planetary Sciences / EPSC 201 / What does element mean in terms of magnitude scale?

What does element mean in terms of magnitude scale?

What does element mean in terms of magnitude scale?

Description: This is the study guide for exam 3, exactly the way he organized it.

Atom- subatomic particles such as elements, protons and neutrons

Element- atoms are defined by the number of protons

What is the magnitude scale?

We also discuss several other topics like How do you find the primary sequence of a protein?

Metallic luster- minerals that look like a metal, shiny

Hardness- minerals resistance to being scratched

What is a fracture of a bone?

1. Know what an atom and element is

Atom- subatomic particles such as elements, protons and neutrons Element- different type of atoms, atoms are defined by the number of protons

3. What is the complete definition of mineral

1. Naturally occurring We also discuss several other topics like What is the definition of sexual orientation?

4. Know the complete definition of luster

1. Metallic luster- minerals that look like a metal; shiny

2. Non- metallic luster- do not look like a metal

5. Why is color a poor property to use when identifying minerals

It is a horrible property because the color of a mineral tells you nothing over the minerals. For example, Quartz has over 120 different colors

6. What is the difference between color and streak color

With color it is all about impurities, one can’t tell nothing from it. With streak color one can tell by the powder that’s left behind and usually is always the same. It is only useful for certain minerals that have a metallic luster.

7. How do geologists determine the hardness of a mineral

By looking at the minerals resistance to being scratched

9. What is mineral cleavage? How is it different from fracture?

Mineral cleavage has the ability to break along smooth parallel surfaces. It is difference from fracture because with fracture the minerals break in a non-smooth rough surfaces. We also discuss several other topics like What are the components of religion?

10. What conditions are needed for a crystal to grow large? How is crystal form different from cleavage?

11. What are some other properties that can be used to identify minerals? a. Specific gravity (ex. Density, metallic luster is heavy such as gold and with non-metallic luster it has a low density)

b. Magnetism (ex. Is it magnetic)

Silicates: Rock-forming minerals, made out of Silicon and Oxygen

Silicon-oxygen Tetrahedron: silicon and oxygen have an arrangement which are 4 oxygen atoms (-2) & 1 silicon atom (+4) We also discuss several other topics like A priori means what?

Ionic Bonding: Positive attracts negative and can be brought together creating a bond (weak; cleavage)

Ions: group of atoms formed due to loss or gain of one or more electrons Cations: positive charge

1. What type of bonding is stronger? Covalent or Ionic? And why?

Covalent bonding is stronger because they share one oxygen atom between two tetrahedra. Has a fracture surface making it a hard mineral to break because it is strong-bonded together

2. How is bonding related to the two groups of silicate minerals?

They both include Silicons and Oxygen

6. Native Elements- only consist of a single element and it’s a pure compound, for example diamond is made out of carbon only. Other elements are gold, silver, copper, platinum and silver

Terms to Know: *definitions are the order of the rock cycle*

Igneous Rock: forms from the cooling and crystallization of molten rock Weathering: slowly breaks down these rocks into smaller pieces (series of chemical and physical processes)

Transportation: pieces get picked up and moved through water, winds, glaciers, waves, and tides

Deposition: material gets deposited into a place

Sediment: loose material that either compacted or cemented

Lithification: turns into sedimentary rock (compaction and cementation) Sedimentary Rock: forms form either pieces of preexisting rocks or the hard parts of once living plants and animals.

Metamorphism: subject rock to high temperatures and pressure that chemical reactions will occur

1. Know the outside loop of the rock cycle. 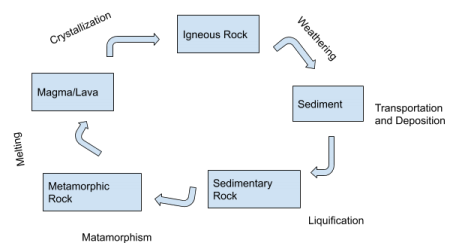 4. Can any rock undergo metamorphism? Yes, all!

Lava- gentle eruption, flows out onto the surface

Intrusive- below surface, cools slowly- small or no crystals

Glassy- has no minerals, no crystals

Porphyritic- has small crystals, but also a mixture of a few large crystals Andesite- can be gentle or violent and is part of the composite cone volcano Basalt- gentle eruption, is part of the shield volcano

2. How does the location in which the molten rock material influence the texture of the igneous rock?

Texture is controlled by how fast the molten material cools. Location controls texture and what the rock will look like.

3. What are the different types of textures that can be exhibited by an igneous rock? Phaneritic- all large crystals

Porphyritic- it's complicated because it has small crystals, but can sometimes have a few large crystals

Glassy- rock cools extremely rapidly, absolutely no crystals (ex. obsidian) 4. What is the special significance of a porphyritic texture?

NOTE: You got one above ground and below ground that is why porphyritic is complicated and special

5. Know the classification of igneous rocks

7. What is the significance of a glassy texture?

It has no crystals meaning no crystalline structure, making them to never have order, they get locked in. Glass has no minerals.

Detrital- made up of bits of pieces left after weathering

Non-Detrital- pieces of rock go off into the ocean and come back together, get produced Clay- small size sediment

Lithification- destruction through compaction and cementation

Cross-Bedding- dune, form by wind but sometimes also by water

Ripple Marks- formed in sand by wind, but commonly formed by water has curvy lines. Can get fossilized

Fossils- evidence of past life

1. Know the difference between chemical and mechanical weathering?

1. Frost wedging: frozen water getting into the cracks of the rock eventually breaking it into smaller pieces.

2. Unloading: rock that is formed deep under the surface known as sheeting. Over geological time the rocks above get removed and those below the surface are now above.

3. Thermal expansion: heating rock causes expansion when getting hot that will eventually be broken down into small pieces.

1. Dissolution: it attacking a solid at the atomic level and the water molecules kick off ions and surround them within water molecules. Ex. coffee, tea sugar

molecules get surrounded by the water and get dissolved.

3. Oxidation: Mineral Fe, adding oxygen will get oxide plus ions.

2. What by-products of weathering are used to make sedimentary rocks? These are the raw materials-

● Quartz is the major by product, resist weathering

● Orthoclase/Plagioclase left over after weathering

3. What is the difference between a detrital and non-detrital sedimentary rock? Detrital: Sediment that is made up of bits and pieces of minerals that are left after weathering and put together to make Detrital rocks

Non-Detrital: mostly made up of ions that get liberated, made of different by products of weather.

4. What are the different types of sediment and what is the basis for the classification of these different sediment types?

Detrital sedimentary Rocks: is all about the size of the sediment

Sandstone (made up of

5. What is the difference between a sediment and sedimentary rock?

Sedimentary Rock- forms when sediments are compacted and cemented together (liquification)

6. What is the bedrock of Laredo?

In laredo we have both sandstone and shale

7. How does a non-detrital sedimentary rock form? Know some examples of this rock type. Composition, taking the ions into liberation and then putting them together to form a rock. Ex.

● Limestone, is form of calcite usually found in sea shells

● Chert, is made mostly of the mineral quartz there can be dozens of chert ● Rocksalt, made of the mineral halite found in places that are very hot and have high evaporation.

● Rock gypsum, is made of the mineral gypsum

● Coal, is made of plant material not made of minerals

8. Know the basic depositional environments where sediment can be deposited. Sedimentary environment 3 basic

3. Marine: on the continental shell, reef, deep marine thousands of feet down below sea level.

9. What features can help you interpret the depositional environment of a sedimentary rock? Sedimentary structures

➔ Cross bedding: found in dunes made of wind and water.

➔ Ripple Marks: sediment that has been moved, from in wind commonly found in water. ➔ Mud cracks: deposited on land where mud will dry and form the cracks ➔ Fossil: evidence for past life.

10. What is sorting? How can it be used to determined what mechanism transported the sediment? Be able to describe a well versus poorly sorted sediment.

Second clue called Sorting, is a measure of the variability in particle size. ● Well sorted: particles all are the same size, you get them by running water or wind (waves and tides)

● Poorly sorted: particles varies in size, have silt, clay, gravel and glaciers they push the sediment up

11. What can mineral composition tell you about the sedimentary environment? Composition:

Protolith- Metamorphic rocks form from a preexisting rock that has been subjected to intense heat, pressure, or chemically active uids and gases (such as volatiles from a magma body) Foliated Texture- is a rock where the minerals have a common alignment in the same direction Metamorphism- is change, the change can be either physical you can change the texture of the rock or chemical reaction, it changes the minerals that it has

Marble- nonfoliated metamorphic rocks, as the coase calcite crystals will not display any form of mineral alignment

Slate- protolith of shale, its metamorphic grade is low

Regional Metamorphism- Metamorphism that is driven by increasing heat and pressure Quartzite- they appear to be hard, strong rocks but are composed entirely of calcite (which has a hardness of 3 and can easily be scratched by a steel nail)

Schist- protolith of shale, its metamorphic grade is medium to high

1. In general, what conditions are necessary for metamorphism to occur? ● Heat- Metamorphism happens during hot temperatures, but is not high enough because it will could create magma

● Pressure- miles below the surface

● Chemically reactive fluids- such as water and carbon dioxide these fluids can catalyze chemical reactions and minerals will change giving you a metamorphic rock. 2. What type of texture is associated with contact metamorphic rocks?

● Big magma chamber- is producing heat that will bake the rock around it. ● Limited pressure, there is not much pressure

● Since there is no pressure there is no minerals lining up known as non-foliated texture. 3. What type of texture is associated with regional metamorphic rocks?

● Period of mountain building- ex. Two continents collide and the earth is under a lot of pressure and as a result of them being built they are buried to great depths and subjected to high temperature/pressure.

● High pressure- Under the mountains rocks go under pressure creating new rocks such as gneiss and line up in one direction.

● Foliated texture- is a rock where the minerals have a common alignment in the same direction.

4. What are the protoliths associated with a marble, quartzite, schist, and gneiss? Non foliated

● Protolith: the rock that existed before metamorphism

1. Sandstone gets subjected into high temperatures known as quartzite

2. Limestone after magma is marble

● Protolith: metamorphic grade it's the intensity of metamorphosis

● Shale (sedimentary): low grade metamorphism transform into the rock call slate ● Shale after being in high temperature it becomes into schist

● Granite: it takes high grade metamorphism to do anything to granite and transforms into gneiss

What is the definition of constant return scale?

Caste system continued by the mauryan enhanced with stricter boundaries by the?