Description: These are the notes for week two fo Human/Comparative Physiology!

What is a aquatic habitat?

o Be able to apply water and salt physiology to a variety of diff  environments, and describe the common regulatory strategies for all  major environments

 Osmolarity =  If you want to learn more check out What makes a testable prediction based on observations?

 2 ways to respond to changes in osmolarity  We also discuss several other topics like What is the difference between counseling and counseling psychology?

What does brackish water contain?

 Shrimp can keep its osmolarity both higher and lower

 Mussel is a conformer

 Ex. Crab used to brakish water, if it is put in marine water the crab has lower  osmolarity than environment and it would shrink and therefore not break to  new shell/molt

o Most fundamental role of kidneys is to regulate the composition of  blood plasma (by removing water, salts and other solutes)

 gills (in dish and other aquatic animals)

How does the body regulate blood osmolality?

 If U/P < 1 = excrete water in urine = pref water  Don't forget about the age old question of What are the similarities and differences between homogeneous and heterogeneous mixtures? 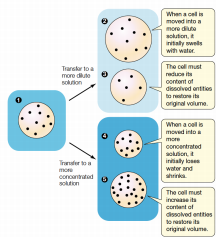  Note that concentration of inorganic ions remains constant  Don't forget about the age old question of What rights make an individual self-reliant and self-sufficient?

 Pump in salt; through gills

 How to minimize negative effects

 But gills have large surface area, which are necessarily

thin and permeable for O2 uptake  If you want to learn more check out What is selective attention and how does it relate to the cocktail party effect?
Don't forget about the age old question of What are the layers of the serous membrane?

 How to counteract negative effects

hypoosmotic urine. Although the level of NaCl of urine is

lower than that of blood, leads to net loss of salts

 Volume and ion regulation are in conflict of each other

 Large amount of urine produced by kidneys instead of

 Teleost fish were once marine

o Marine- Inside molarity is smaller than outside marine

 Water diffuses to the outside because

o Uptake of Cl and Na are independent of each other

o +ions for +ions and –ions for –ions; electroneutrality

o Most of their solutes inorganic

 Animals in the ocean- invertebrates

How did political parties begin in the us?

Why do bacteria die during the death phase?