Solvent passes through semipermeable membrane from less to high concen

Solvent passes through semipermeable membrane from less to high concen

Description: These are the filled out LOs based on what we have discussed for exam 1.

Solvent passes through semipermeable membrane from less to high concentrated area, equilizing the concentration of both sides, is what?

2) Be able to explain regulation, conformity and homeostasis.

a) Homeostasis: internal constancy and the physiological regulatory  systems that make adjustments to maintain it

b) Conformers: animals that allow some aspects of their internal  physiology to vary along with environmental conditions

c) Regulators: animals that maintain internal constancy in the face of  external variability 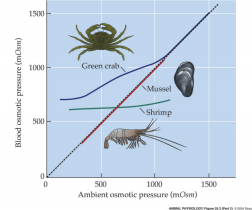 What are the most important roles of kidneys?

3) Be able to list 5 major time frames relevant to physiology.

 short-term changes in the physiology of indiv animals;

changes that indiv exhibit right after the environments

o 2-chronic changes (acclimation and acclimatization) Don't forget about the age old question of What is the center of millions of orbiting objects?

 long-term changes in the physiology of indiv animals;

changes that indiv display after they have been in new

b) Changes in internal

 Changes in physiology of indiv animals that occur in a

programmed way as the animals mature from conception

into adulthood and then to senescence

 Changes in the physiology of individual animals that occur in repeating patterns (ex. Each day) under control of the  Don't forget about the age old question of What is fiber-temper ceramics?

4) Be prepared to provide a physiological example for each of these time  frames.

o One way is to use phylogenies to infer evolutionary history

 Ex. Arctic fish have less myoglobin until fish with

 Each animal has a range of environments which it could

tolerate and can be assessed

o visualized and such

o Phenotypic plasticity We also discuss several other topics like What is the meaning of behavior in psychology?

development can result in differences in the adult

5) Be able to recognize poor experimental design that arises from insufficient  consideration of these time frames.

a) Studying a mechanism at one level of one species, developmental  state, or environment leads to limitations

1) Understand physical forces that lead to the movement of solutes and water a) Simple diffusion: diffusion of solute towards equilibrium (from high to low)

b) Osmosis: solvent passes through semipermeable membrane from less to high concentrated area, equilizing the concentration of both sides  c) Fick Diffusion Equation

 Determined by how easily the solute of interest moves

 Other factors that influence D are temp and fluid

d) Osmotic pressure of solutes is independent of the charge

e) Concentration and electrical effects can be reinforcing or opposing  o Reinforcing- concentration increased on one side as it is more  positive  If you want to learn more check out What is Pietra serena?

2) Be able to explain osmolarity (including iso- , hyper- and hyposmotic). a) Osmolarity: concentration of solution; total number of solutes per liter

b) Hyperosmotic: solution with the greater concentration of solute  o In this solution, cell shrinks

c) Hypoosmotic: when solution of object has less concentration of ions  than the surrounding (freshwater fish in saltwater)

o In this solution, cell expands

o In this solution, nothing happens 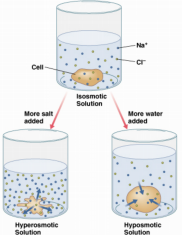 Don't forget about the age old question of Who is Elizabeth Blackwell?

3) Be able to describe the typical ion distribution in and around a cell, and how  this distribution comes about.

e) Potassium wants to flow out and Na in thru channels We also discuss several other topics like what is electric potential?

4) Be able to describe the role of cell membranes and their components in  osmotic processes.

a) ion channels allow ions through

b) Structure of membrane- phospholipid bilayer-semipermeable  o Without channels and protein, not permeable to much

e) Na more on outside and Cl more on inside

5) Be able to describe, and provide examples for primary and secondary active  transport

b) Secondary active transport: uses other means to drive process and  ATP indirectly

o Can also be counter-transporter 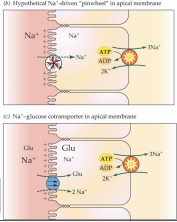 o This happens when gills actively take up salts

6) Understand how osmolarity, transport and ion channels influence the  movement of solutes and water.

b) There is no direct active transport of water

o Increase the concentration of solutes on one side

o Ensure that water can cross the membrane via aquaporin

membrane which otherwise could not (these are not channels)  o Ex. Polar organic solutes

1) Be able to apply water and salt physiology to a variety of different  environments, and describe common regulatory strategies for all major  environments.

a) Brackish water- middle between freshwater and saltwater

i) Kidneys- regulate composition of blood plasma by removing  water, salts, and solutes 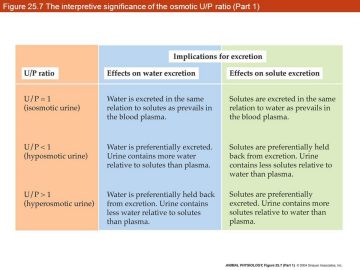 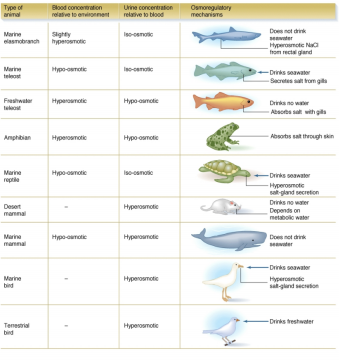 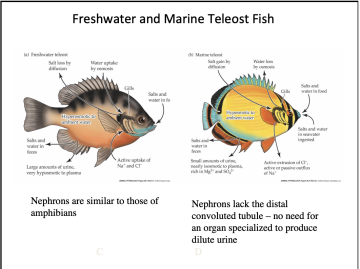 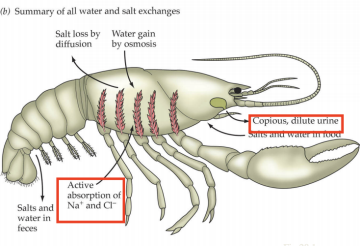 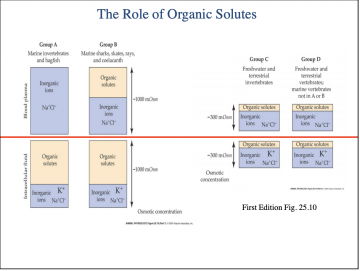 (a) Loose water due to osmosis

(b) Drink sea water; gills and gut reduce salt and

therefore water flows in and urine removes salt too

(2) Therefore, water is gained by osmosis

(1) Air contains water only in gas form; unless air is saturated with water, it becomes dehydrating 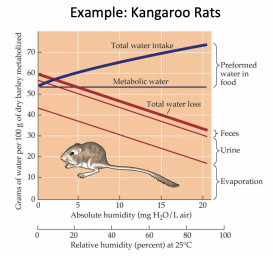 (1) Curve for water loss because humidity increases and less  water is lost by the animal.

(2) Less evaporation because of the amount of humidity

1) Describe the most important roles of kidneys.

2) Be able to define and describe the major components of a kidney. a) Nephron: unit of kidney regulating water and solutes

i) Glomerulus: capillary tuft that receives blood and is surrounded by the bowman’s capsule where filtration of blood occurs

(a) Vary rate of filtration by changing pressure

(b) Vary proportion of nephrons active

ii) Bowman's capsule: surrounds the glomerulus and filters  through what comes into the nephron from blood; creates

(a) Shape and charge matter too

away from filtration because there is more and larger

molecules in the blood than the nephron

iii) Proximal convoluted tube: first site of water reabsorption into blood as well as glucose and some salts

iv) Loop of henle: consists of descending and ascending limb;  transfers fluid from proximal to distal

(1) Descending- highly permeable to water but not ions

3) Be able to examine forces that lead to fluid and solute movement within the  different components of a nephron.

a) 3 kinds of pressures within glomerulus and bowman’s capsule: i) Blood pressure in glomerular capillary

v) In step 2, active transport is used to bring in solutes and drive  the pumps to go against concentration gradient

c) 2 types of water in kidneys

i) Water is required to accompany excreted solutes

ii) Additional water that may be excreted, but not necessary 4) Be able to analyze fluid and solute movements in amphibian nephrons, and  be able to describe how this mechanism can lead to a U/P equal or less than  one. 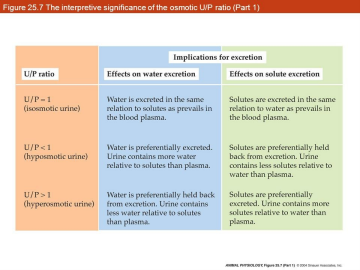 i) Amphibians can only do first two

ii) Mammals do all three 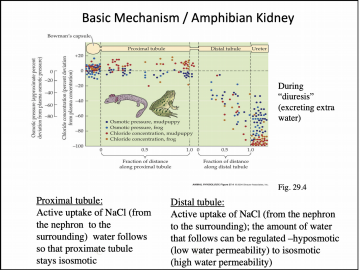 5) Understand how antidiuretic hormone alters the permeability and function of  certain components of the kidney.

a) ADH can regulate water re-absorption

iv) controls the water permeability of the bladder

1) Be able to analyze morphological differences in mammalian kidneys and  interpret how these differences relate to humid or arid environments. d) Medulla: innermost region of kidney; consists of bulk of nephron i) Thicker medulla is important

e) Cortex: outer region of kidney, between capsule and medulla that has  space of vessels to the nephron

h) Ureter: connects from kidney, to excretion; removes waste i) Nephron: unit of kidney regulating water and solutes  i) Glomerulus: capillary tuft that receives blood and is surrounded by the bowman’s capsule where filtration of blood occurs (1) Glomerular filtration rate: rate at which primary urine  is formed

(a) Vary rate of filtration by changing pressure

(b) Vary proportion of nephrons active

ii) Bowman's capsule: surrounds the glomerulus and filters  through what comes into the nephron from blood; creates  pressure

(a) Shape and charge matter too

(2) Osmotic pressure (colloid): draws solutes into blood and  away from filtration because there is more and larger

molecules in the blood than the nephron

iii) Proximal convoluted tube: first site of water reabsorption into blood as well as glucose and some salts

iv) Loop of henle: consists of descending and ascending limb;  transfers fluid from proximal to distal

(1) Descending- highly permeable to water but not ions  (a) Water reabsorbed, osmolarity increases

(2) Ascending- impermeable to water but permeable to ions  (a) Salts reabsorbed, osmolarity decreases

a) Collecting duct: affected by hormones; takes fluid to ureter as urine

iii) There is a relationship between medulla thickness and urine  concentration

e) Hallmark of mammalian kidney: longer nephron/loop of henle which  goes deep into the medulla

i) For arid animals, the most important is that the max urine  concentration is very high

2) Be able to explain how the single effect and countercurrent multiplier allows  mammals to produce urine that exceeds a U/P of 1.

g) Collecting duct- impermeable to water only in diuresis

h) single effect: ascending limb actively pumps out NaCl, but has a low  permeability to water, so descending limb looses water and takes up  NaCl

space, until it reaches equilibrium

4) Be able to review kidneys in other selected animal systems. a) Fresh water

i) Nephrons are similar to amphibians

ii) Ions are actively transported into proximal tubules, water and  other solutes follow

a) Nitrogen is byproduct of protein metabolism; other major atoms are  voided by formation of H2O and CO2

b) Most common forms of nitrogen acid

(1) Cheap but toxic, easy to eliminate for animals that are not

limited by water, ammonia is generally voided at the rate

(1) Far less toxic, but more costly than ammonia- each molec

(1) Very low toxicity, but very costly; low solubility: can be

excreted as salts in the form of fairly dry pellets, or stored

in tissue without causing damage. Most common strategy

1) Understand that source of all energy and be able to contrast major food  sources, in regards to where they come from and how they are digested. a) Human body is dominated by proteins and lipid

i) Huge diversity of protein

b) Source of energy

i) Almost all energy comes from the sun

ii) Photosynthesis of green plants is the basis of food chains

iii) BUT, symbioses with chemoautotrophs is an exception (uptake  of hydrogen sulfite, oxidized to sulfate)

c) Lipids have 2x amount of energy than carbs and proteins

iv) Delivering to the cells

i) Diversity of feeding mechanisms

(1) Mouth cavity of a snail showing the radular apparatus

i) Total surface area of intestines is about 200 sq meters

3) Be able to provide examples of where and when mechanical and chemical  breakdown takes place, including the roles of major enzymes. a)

4) Be able to discuss the 4 major segments of the gut, and describe the most  important processes that take place in each of them.

a) Headgut: part of digestive tract in the head and neck; take up food an prepare it (mechanical digestion, some enzymes)

c) Midgut: in humans small intestine; principle site of digestion and  absorption of proteins, carbohydrates and lipids (plus vitamins and  minerals).

5) Be able to contrast foregut and hindgut fermentation and list example  animals for each.

What is Marginal cost?