LAMAR UNIVERSITY / Psychology / PSYCH 3370 / What are the important roles in children's development?

Description: This is the study guide for Exam 1. It covers chapters 1, 6 and 7

Development: the pattern of change from conception through the life span. It involves both growth and decline.

Dimensions of sociocultural context – culture, ethnicity, socioeconomic  status, and gender – help to mold how an individual develops through life

Dimensions of sociocultural context refers to what?

Culture - the behavior patterns, beliefs, and all products that are passed from generation to generation. Cross-culture studies – comparison of two or more  cultures

Ethnicity - a characteristic based on cultural heritage, nationality, race,  religion, and language. Diversity exists within each ethnic group

Socioeconomic status - a person's position within society based on  occupational, educational, and economics characteristics. It implies certain  inequalities.

Gender - the characteristic of people as males and females 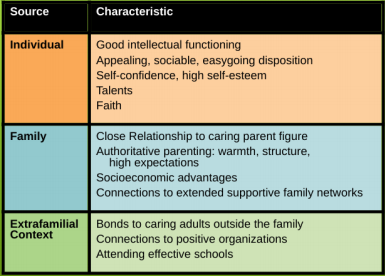 Socioeconomic status refers to what?

 Biological processes produce changes in an individual body.  Cognitive processes refer to change in an individual's thought,  intelligence and language We also discuss several other topics like What are the characteristics of life span perspective?

 Socioemotional processes introduce changes in and individuality  relations with people, changes in emotions, and changes in personality  Connections across the three is considered in two rapidly emerging  fields

 In many instances they are bidirectional.

 Early Childhood (Preschool years) Don't forget about the age old question of What factors influence the size of elasticity?

Cohort effects – due to a person's time of birth, era and generation but not to actual age

*Their ethnic diversity and their connection to technology

Issues in Development Don't forget about the age old question of What is the eukaryotic chromosome mapping?

o To what degree are early and late experiences key determinants  to development?

3. Draw Conclusions We also discuss several other topics like What is the used to communicate?

Psychoanalytic Theories – The theory that development is mainly  unconscious and influenced by emotions.

 Behavior is a surface characteristic

 To understand behavior, one must analyze the symbolic meanings of  behavior

o The personality of instincts

o This is the unconscious

o The personality of morality, of what's right or wrong

o This is the conscious

There are five Freudian stages of development:

Our primary motivation for behavior is social and to affiliate with others.  Emphasis on the importance of both late and early experiences.

Erikson has eight stages of development: 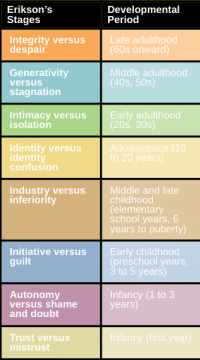 Piaget’s theory: children actively construct their understanding of the world  and go through four stages of cognitive development.

Information-processing theory: emphasizes that individuals manipulate info,  monitor it, and strategize about it 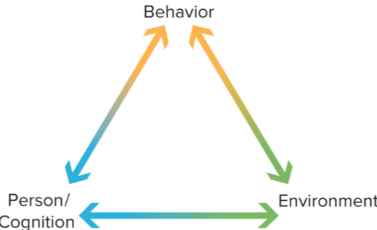 Ethology stresses that behavior is strongly influenced by biology, is tied to  evolution, and is characterized by critical or sensitive periods.

Theories are guidelines and following just one is problematic.

Observations must be systematic

Where should they be made? 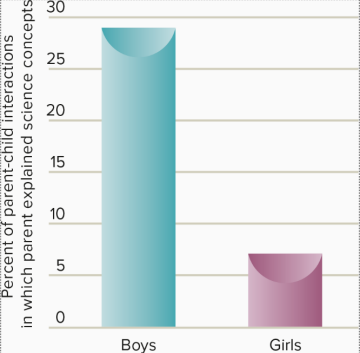 Descriptive research: has the purpose of observing and recording behavior

Correlational research: goal is to describe the strength of the relationship  between two or more events

 Correlation coefficient: number based on statistical analysis that’s used to describe the degree of association between two variables

Experiment: a regulated procedure in which one or more factors believed to  influence behavior are manipulated while everything else is manipulated

Piaget’s theory is a general, unifying story of how biology and experience  sculpt cognitive development

Infants construct and understanding of the world by coordinating sensory  experiences 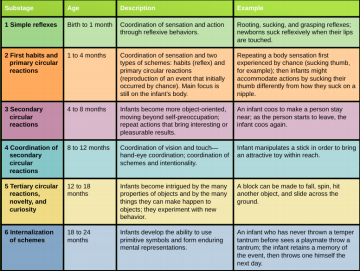 Object Permanence: understanding that objects continue to exist, even when they can’t be seen, heard, or touched

Explanations of the causes of change are debated

Researchers found that infants see objects as bounded, unitary, solid, and  separate from their background much earlier than Piaget envisioned.

 Some have explored whether morality is build-in

 Classical conditioning: as a result of pairing, a new elicits a response  previously given to another stimulus

 Skinner’s operant conditioning: the consequences of a behavior  produce changes in the probability of the behavior’s occurrence

Infants can retain information from the experience of being conditioned  Kicking to move a mobile, even when the foot is not tied to the mobile How Infants Learn, Remember, and Conceptualize: Attention

 In the first year, it is dominated by an orientation/investigative process  From 3 – 9 months, infants can deploy attention more flexibly and  quickly

 Habituation: decreased responsiveness to a stimulus after repeated  presentation (have a rattle and get used to it)

 Dishabituation: the increase in responsiveness after a change in  stimulation (play with a ball to change stimulus, then increased  interest back in the rattle after playing with the ball)

By the end of the second year, long-term memory is more substantial and  reliable

Focuses on the infant's ability to process info

Language Development In Infancy: Defining Language Language: A form of communication based on a system of symbols

Infinite generativity: The ability to produce and comprehend an endless  number of meaningful sentences using a finite set of worlds and rules

Before learning words, infants make fine distinctions among the sounds of  the language. Before speaking, they produce vocalizations

Children can sometimes overextend or underextend the meanings of the  words they use.

Between 18-24 months, most communication consists of two-word  utterances

Telegraphic speech: use of content words without grammatical markers such  as articles, auxiliary verbs, and other connectivity

Nervous system and vocal apparatus evolved over hundreds of thousands of  millions of years. Humans acquired language about 100,000 years ago.

Children’s language acquisition is remarkably similar all over the world,  suggesting a biological basis.

Broca’s Area: an area in the left frontal lobe involved in producing words

Wernicke's Area: an area in the left hemisphere involved in language  comprehension

Aphasia: damage to Broca’s area or Wernicke’s area causing a loss or  impairment of language processing

Language Acquisition Device (LAD): Chomsky’s term for a biological  endowment that enables the child to detect the features and rules of  languages including phonology, syntax, and semantics

 Theoretical construct, rather than a physical part of the brain  Critics argue such a construct can’t explain the whole story of  language acquisition

 Doesn’t explain how people create novel sentences; and syntax is  learned even without reinforcement

Child-directed speech: language spoken in a higher pitch than normal with  simple words are sentences

 Recasting: the adult restates the child's immature utterance in the  form of a fully grammatical sentence

 Labeling: naming objects that the child seems interested in

Infants, toddlers and young children benefit when adults read books to and  with them

Biology and sociocultural experiences contribute to language development. Both biological capacity and relevant experience are necessary. Emotional Development in Infancy

Emotion: feeling, or affect, when a person is in a state of an interaction that  is important to them

Primary emotion: present in humans and other animals

Researches debate how early various emotions occur, such as jealousy, and  in what sequence

Crying is the most important mechanism newborns have as communication

 Reflexive smile: occurs in the first month and isn’t a response to  external stimuli

 Social smile: a response to external stimuli such as faces, occurring as  early as 4-6 weeks

Fear is one of a baby’s earlies emotions, typically first appearing around 6 months

o Not shown by all

 Separation protest: distress at being separated from the caregiver o Occurs at 7-8 months and peaks at about 15 months Emotional Regulation and Coping

During the first year, the infant gradually develops an ability to inhibit or  minimize the intensity and duration of emotional reactions

 Self-soothing, such as thumb sucking

 Redirected attention and self-distraction later in infancy  By 2 years, toddlers can use language to define their feelings Contexts can influence emotion regulation

Caregiver responses matter, but there is debate over whether and how  parents should respond

Temperament: Biological Foundations and Experience Physiological characteristics have been linked with different temperaments

Individuals with an inhibited temperament in childhood are, as adults:

 Less likely to be assertive

 At a higher risk for developing anxiety disorder

Physiological and heredity factors are likely involved in continuity

Links between temperament in childhood and personality in adulthood also  might vary, depending on the context in individuals experience

Reactions to an infants’ temperament can depend, in part, on culture

Temperament and Goodness of Fit

Goodness of fit: the match between child’s temperament and environmental  demands

o Training leads mothers to alter their demands on the child,  improving the fit between the child and the environment

Social Orientation/Understanding and Attachment and Infancy

According to Ross Thompson, infants show a strong interest in the social  world and are motivated to orient to it and understand it.

 From early in their development, infants have a social orientation

Locomotion (crawl, walk, run) is important to independence, especially in the second year of life

Intention, goal-directed behavior, and cooperation are important to cognitive  development 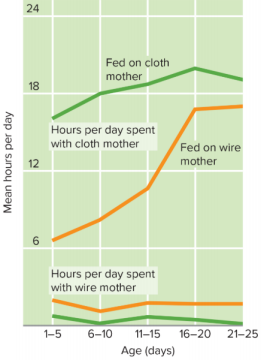 Attachment and Its Development

 Disproved by Harlow’s research, which showed that physical comfort is  preferred for security

 Attachment is an innate predisposition for attachment

o Phase 4 (24+mths): children become aware of others’ feelings,  goals, and plans and take them into account

Developmental social neuroscience examines the connections among  socioemotional processes, development and the brain

Research has focused on:

 Hormones and neurotransmitters in attachment

It is likely that several brain regions, neurotransmitters and hormones are  involved in the development of infant – mother attachment 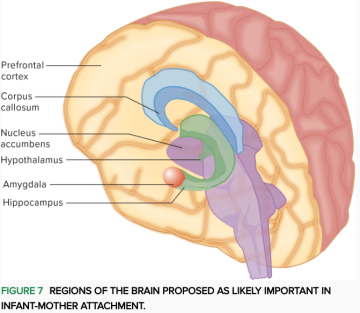 Socioemotional Development in Infancy: The Family

 Interrelated, interaction parts are defined in terms of generation,  gender and age

In the transition to parenthood, parents must adapt:

 Marital satisfaction decreases after birth for many

 Parental cooperation has positive effects for parents and children

 Scaffolding: adjusting the level of guidance to fit the child’s  performance 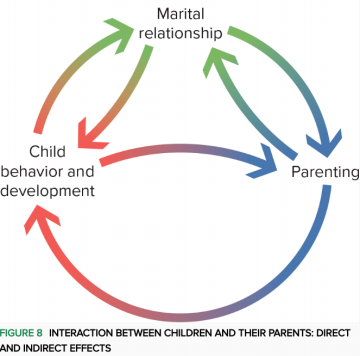 What are the different causes of land degradation?

What are the steps in the perceptual process?