What are the four main types of components that make up the cell membrane?

 Transmembrane Protein­integral membrane proteins­proteins that float in lipid bilayer,  transport and communications across membrane, most can move around

What are the six functions of membrane proteins?

2. Be able to explain the six functions of membrane proteins. How does the structure of these  proteins influence their function? We also discuss several other topics like What is the fundamental key to learning?

 Transport­movement of molecules across a membrane

3. Be able to explain the differences between passive transport, facilitated diffusion, osmosis,  active transport, and mass transport. Give examples of each.

Facilitated diffusion­molecules that can’t easily cross membrane may move through proteins,  move from high to low concentration, have channel proteins(hydrophilic channel when open) We also discuss several other topics like Flashbulb memory means what?

Osmosis­cytoplasm of cell is an aqueous solution. Water is solvent while substances dissolved  are solutes. Net diffusion of water across a membrane toward a higher solute concentration

Mass transport­net movement of mass from one location to another We also discuss several other topics like Where is brazil located on the world map?

1. Be able to define the two redox reactions and show where electrons are moving in each. Oxidation­atom/molecule loses an electron

2. Be able to explain the difference between endergonic and exergonic reactions. How do you  identify what type of reaction you are dealing with? What is ΔG? How does the ATP cycle fit  into this picture?

Endergonic­Positive change in energy, products have more free energy than reactants, not  spontaneous, H is higher or S is lower Don't forget about the age old question of What is an integrating channel?

Exergonic­Negative change in energy, products have less free energy than reactants, H is lower  or S is higher or both, spontaneous

ΔG­change in energy available to do work

ATP stores energy, while endergonic/exergonic are forms of reactions that create energy

3. Be able to recognize the role that biological catalysts play in reactions. What are enzymes and catalysts typically made of? Explain the structure of enzymes and different ways they can be  activated or inhibited.

Catalysts­substances that influence chemical bonds in a way that lowers activation energy Enzymes are biological catalysts mainly made of protein, initiate reactions in substances

1. Be able to list the four stages of the oxidation of glucose. Where in the cell are these taking  place? What are the beginning and end products of each stage?

 Krebs Cycle­acetyl­CoA into 6 CO2, 4 ATP, 10 NADH, 2 FADH2 If you want to learn more check out How does one compute for revenue?

Occurs in the mitochondria 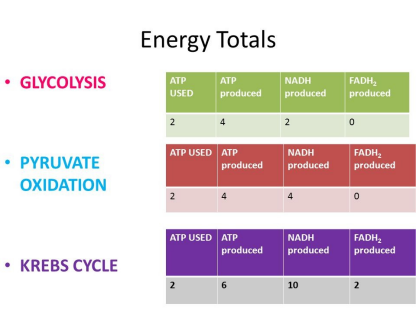 3. Be able to describe some of the strategies for organisms that exist in the absence of oxygen.  What are some commonalities between lactic acid and alcohol fermentation?

 lactic acid and alcohol fermentation both occur in anaerobic conditions to produce small  amounts of ATP and convert pyruvate into substances(lactic acid for lac. Ferm., ethanol  and C02 for alch. ferm.).

Photosynthesis occurs in plants, algae, bacteria, and some animals. The chloroplast carries them  out, using the thykaloid(stores chlorophyll), thykaloid membrane(where light reactions of  photosynthesis occur), granum(stacks of thykaloids), and stroma(fluid­filled space around grana  that synthesize molecules from H20 and CO2).

3. Use ATP and NADPH to synthesize organic molecules from CO2 chloroplast

Photosystem 1­absorbs longer wavelength of light(700nm), gets electrons from  photosynthesis 2

Photosystem 2­absorbs shorter wavelength of light(680nm), gets electrons from water

3. Be able to sum up the processes of the Calvin cycle. Are these reactions light dependent or  independent? Where do they take place?

4. Be able to describe some of the major differences between C3, C4 & CAM plants. C3­fix carbon using only Calvin cycle

concentration gradient he thermal motion of all

Osmosis­net diffusion of water across a

(liquid or gas) particles at temperatures above absolute zero.

membrane toward a higher solute

Diffusion­the movement of molecules across a membrane

cell surface markers­special proteins and carbohydrates attached to the cell

membrane. While some proteins have the task of allowing the transport of molecules across the membrane, cell surface markers play a role in inter­cellular communication and recognition.

Isotonic­equal amount of solute and solvent

Exocytosis­movement of substances out of a cell that requires energy

Endocytosis­movement of substances into cell

Reactant­substance that undergoes a change in a reaction

Multienzyme complex­several copies of one or more enzymes

Ribozymes­RNA molecules that can catalyze certain

Enzymes­biological catalysts not changed or consumed in reaction

influence chemical bonds in a way that lowers activation energy

quantity equivalent to the total heat

content of a system. It is equal to the internal energy of the system plus the product of pressure and volume.

enzyme from binding to the substrate

changing of shape of a site when binded to an enzyme

Active site­pockets or clefts for substrate

Substrate­reacts with a reagent to generate a product

decreasing of effectivity of a molecule due to an enzyme binding

Anabolism­the turning of simple molecules to complex ones

Catabolism­breakdown of complex molecules into simpler ones

Autotroph­able to produce their  own organic molecules through  photosynthesis

Heterotroph­live on organic compounds produced by other organisms

electrons are accompanied by protons

aerobic respiration­respiration where oxygen is available as final electron acceptor

respiration that takes place without the presence of oxygen

oxidative phosphorylation NADH to O2 resulting in the form of ATP

glucose by enzymes causing the

conversion of pyruvate into

Krebs cycle­oxidizes the acetyl group from pyruvate in

release of energy and pyruvic acid

chemiosmosis­electrochemical gradient can be used to

ATP synthase­mitochondrial enzyme that creates ATP from ADP and phosphate

feedback inhibition­binds to enzyme and decreases

Facultative­performs aerobic respiration and anaerobic when oxygen is not available

Obligate­organism that can’t live without oxygen

chloroplast­ a plastid that contains chlorophyll and in which

photosynthesis: a series of biochemical redox reactions that take place in the stroma of chloroplast in photosynthetic organisms.

Pigment­molecules that absorb light energy in the visible range

photoelectric effect­removal of an electron from a molecule by light

Photosystem II­One of two light capturing units in a chloroplast's thylakoid membrane; it has two

molecules of P680 chlorophyll a at its reaction center, makes ATP and uses electrons from light.

C3­plants that fix carbon using only the Calvin cycle

C4­type of photosynthesis that is good for hot dry climates

CAM­C4  pathway at night and C3 during

How is acid affected by the atomic size?

How is etc affected when oxygen is absent?