Course: Principles of Chemistry I

1. Apply the shell model of multi-electron atoms to describe the concept

of core vs. valence electrons

Core electrons occupy the innermost shell or lowest energy levels 2. Describe the organization of the periodic table and the characteristics of elements in different regions of the table. 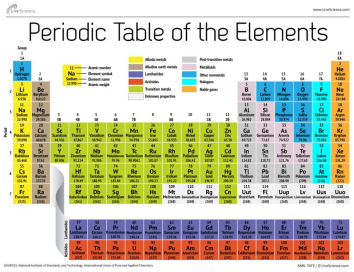 What is a dipole moment?

If you want to learn more check out What is ethnicity? 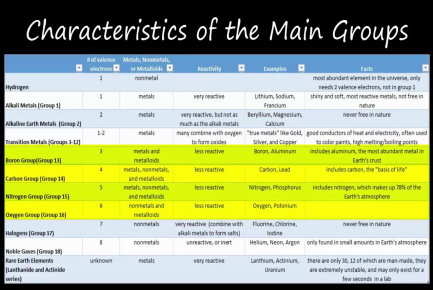 3. Describe the concept of electronic shielding and effective nuclear charge (Zeff) and their relationship to trends in ionization energy, atomic radii, and ionic radii. If you want to learn more check out What legal matters do forensic psychologists assist in?

Shielding is the process by which an inner electron masks an outer electron from the full attractive force of the nucleus, decreasing Zeff. Zeff = Z (number of protons) − S (number of core electrons) 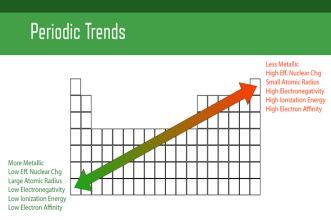 What is hydrogen bonding?

as you move from left to right the effective nuclear charge, Zeff, is increasing. This means the valence electrons feel a stronger attraction to the nucleus. This leads to a smaller radius and a higher ionization energy. Top to bottom:  Don't forget about the age old question of Whta is the difference between automatic fiscal policy and discretionary fiscal policy?

Ionization energy: the energy required to remove an electron from an atom in the gas phase.

each subsequent ionization energy is always higher than the previous one as we are reducing the number of electrons but the number of protons is fixed. Thus, as we remove electrons and decrease the shielding and repulsion, the effective nuclear charge is increasing. If you want to learn more check out Why did europe rise?

The size of the atom shrinks across the same period as the effective nuclear charge increase and increases down the periodic table due to more energy levels and increased electron repulsion.

Electron affinity (EA): the energy released from an atom upon the addition of an electron to form the anion.

The largest EA's occur when filling a shell. Thus, the halogen atoms (group 7) have large EA. Carbon has a reasonable EA as adding an electron would give it a half-filled p subshell. The EA of Zn, Cd, Hg are all zero as they have a filled d-subshell.

4. Identify metals and non-metals, and predict the types of compounds (ionic/covalent) that will form from different elements.

We also discuss several other topics like Why does one nation do well in one industry?

5. Distinguish between molecules, ions, and atoms.

7. Relate Coulomb’s law to ionic radii, ionic charge, and lattice energy. Coulomb's Law states that energy is related to the charges and the distance between them

Smaller ions will be able to get closer together and thus will have lower energies. (larger charge density)

the magnitude of the lattice energy is proportional to the Coulomb energy. 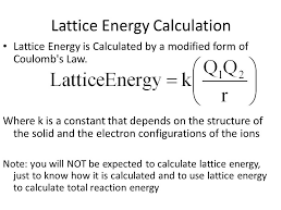 If you want to learn more check out What happens in our body when it lacks nutrients?

8. Describe the distance dependence of the potential energy of a covalent bond.

compared to the separated atoms. 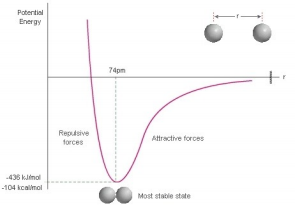 9. Predict and explain relative bond strength and lengths in a compound. 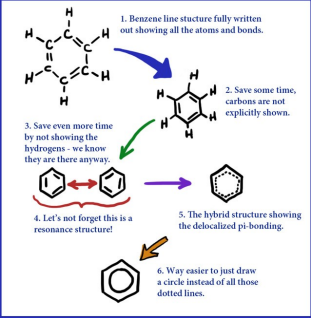 12. Rank the polarity of covalent bonds based on relative electronegativity. 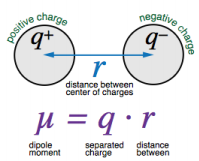 A dipole moment is a quantity that describes two opposite charges

separated by a distance. It can determine the size of the partial charges on the molecule

In order for a molecule to have a dipole moment, it must have polar covalent bonds and a shape in which all the dipoles don't cancel.  Hydrocarbons are considered to be non-polar because the electronegativity of H and C are very close.

14. Draw the best Lewis structure (including any resonance structures) for a molecule or polyatomic ion.

15. Apply formal charges to structures and use them to predict the most likely structure. 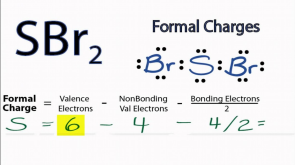 It is best to have a formal charge of 0 for as many of the atoms as possible.

If there has to be formal charge other than 0, then the most stable structure has the negative charge on the most electronegative atom 16. Recognize and apply exceptions to the octet rule.

Molecules, such as NO, with an odd number of electrons; Molecules in which one or more atoms possess more than eight electrons, such as SF6

Molecules such as BCl3, in which one or more atoms possess less than eight electrons.

17. Apply the VSEPR model to determine a molecule's electronic and

molecular geometry based on its Lewis dot structure. 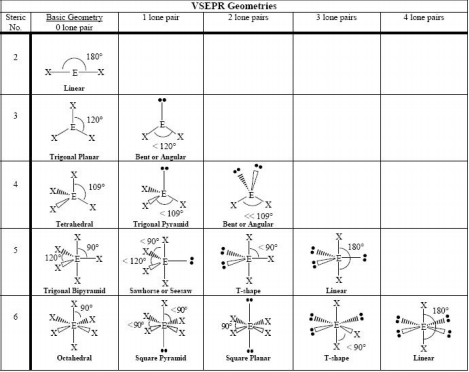 18. Assess if a molecule is polar based on polar bonds and its molecular

A molecule is nonpolar if it is

2. its molecular shape is symmetrical and its outside atoms are the same

19. Identify the orbital hybridization for any atom in a given molecule using the VB mo 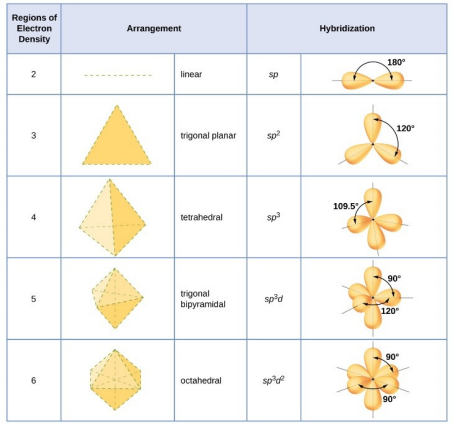 20. Describe the type of bond (e.g. sigma, pi) and the atomic orbitals that are associated with the bond using the VB model.

21. Differentiate between localized and delocalized electrons within a structure.

These new "hybridized" orbitals are degenerate (have the same

energy) that is intermediate to the pure atomic orbitals.

23. Recognize that Molecular Orbital (MO) theory is used to determine the energy of the electron in a molecule as well as its geometry.

25. Construct and fully interpret a MO diagram, including identifying the bond order, the lowest energy electronic excitation energy (HOMO-LUMO gap), and the magnetism (paramagnetic or diamagnetic) for a compound. The bond order is equal to half of the sum of the number of electrons in bonding orbitals minus the number of electrons in anti-bonding orbitals.

HOMO (the highest occupied MO). LUMO (lowest unoccupied MO).  The energy difference between the HOMO and LUMO (HOMO-LUMO gap) is the lowest energy electronic excitation that is possible in a molecule. It can tell us about what wavelengths the compound can absorb.  Paramagnetic compounds have at least one or more unpaired electrons (↑)(↑) while diamagnetic compounds have all paired electron spins (↑↓)(↑↓).

26. Define the three major intermolecular forces (IMFs) that can exist in condensed phases: dipole-dipole, hydrogen bonding, and dispersion. 27. Predict the types of IMFs that a compound can exhibit based on its structure

Hydrogen bonding: This is a special kind of dipole-dipole interaction that occurs specifically between a hydrogen atom bonded to either an oxygen, nitrogen, or fluorine atom.

London dispersion forces: These are the weakest of the intermolecular forces and exist between all types of molecules

Stronger intermolecular forces will also result in a higher physical  property such as higher melting or boiling points, which require  breaking molecules apart.

29. Explain how size, shape and polarizability affect the magnitude of dispersion forces.

Size: In a larger atom, the valence electrons are, on average, farther from the nuclei than in a smaller atom. Thus, they are less tightly held and can more easily form the temporary dipoles that produce the attraction.

Polarizability: The measure of how easy or difficult it is for another

electrostatic charge to distort a molecule’s charge distribution is known as polarizability. A molecule that has a charge cloud that is easily distorted is said to be very polarizable and will have large dispersion forces

Shape: the greater the area of the strip’s contact, the stronger the connection.

30. Relate the IMFs of a compound to liquid properties such as boiling point, vapor pressure, viscosity, and surface tension.

Viscosity is a measure of how well substances flow.

Surface tension is a measure of the toughness of the surface of a liquid Stronger intermolecular forces → higher surface tension. Vapor Pressure

This is a small amount of gas that is found above all liquids. Refer to our lesson about vapor pressure to learn about it.

31. Explain how liquid properties vary with temperature. Viscosity: the higher the temperature of the liquid, the lower the viscosity since an increase in kinetic energy reduces the forces of

(depending upon strength of metallic bonding), Conducting

33. Summarize how the macroscopic properties of solids (e.g. melting point, hardness, conductivity) can be explained by the microscopic model of solids.

34. Use physical data to deduce the type of bonding within solids. Covalent solid: they have localized electrons and the atoms are arranged in fixed geometries. As a result, the melting point of covalent solids is extremely high. They also tend to be extremely hard substances that will break into pieces (stiff and brittle) rather than smoothly change

Metallic solid: Because the electrons are delocalized, metallic solids tend to be good conductors of electricity. They are malleable (can be pounded into sheets) and ductile (can be pulled into wires). That is because the cations in the sea of electrons can slide around without needing to break any very strong bonds.

Molecular solid: The forces holding the solids together are much weaker than for other types of solids because the structure is maintained by IMFs rather than bonds. As a result, these materials have much lower melting points. Molecular solids also have localized electrons so they do not conduct electricity.

How many kinds of neural messages can a single neuron send?

What is fiduciary duty of loyalty?