Description: These are the notes for test 2

○ Response to an actual threat

○ Fear of something that hasn’t yet happened.

○ Activates systems that evolved to respond to actual threats

■ Being anxious to get an elevator so you miss an interview for a  job you really like.

○ Has a genetic component, it runs in families, but it creates a  vulnerability

○ Arousal and anxiety falls within a curve and depending on the task or  person their optimal level will be different.

● Brain Structure involved in dealing with fear and stress

How do we manage anxiety?

If you want to learn more check out It is a type of reaction that ­one substance splits into two or simpler substances. what is it? 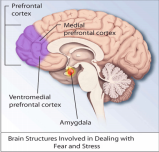 If you want to learn more check out What class of cnidarians do not undergo metagenesis?

○ If they think their panic attacks is caused by a specific thing or setting, they’ll start avoiding it.

What is the treatment of phobia?

○ It’s not necessarily the setting that is the problem but it’s how you  think about the situation.

■ Can lead to phobias

● Embarrassment and humiliation in social situations

● Thoughts and experiences of a horrible event

○ Can be exaggerated

● The fear of spiders. Don't forget about the age old question of What is the difference between bacteriostatic and bacteriocidal?

● This phobia tends to affect women more than men.

● The fear of snakes.

● The fear of heights.

● This fear can lead to anxiety attacks and avoidance of

● The fear of situations in which escape is difficult.

● This may include crowded areas, open spaces, or

situations that are likely to trigger a panic attack. People

will begin avoiding these trigger events, sometimes to the

point that they cease leaving their home.

● Approximately one third of people with panic disorder

● This phobia is often associated with specific personal  experiences, such as being bitten by a dog during

● The fear of thunder and lightning.

● The fear of injections.

● Like many phobias, this fear often goes untreated  because people avoid the triggering object and situation. ■ Social Phobias:

● The fear of social situations.

● In many cases, these phobias can become so severe that  people avoid events, places, and people that are likely to  trigger an anxiety attack.

● The fear of flying.

● Often treated using exposure therapy, in which the client  is gradually and progressively introduced to flying. ■ Mysophobia:

● The fear of germs or dirt.

● May be related to obsessive­compulsive disorder. ■ Animal phobias

○ Involves connections from the septum and hippocampus and frontal  cortex and input from the amygdala. Involves serotonin and  Norepinephrine. It is activated by unexpected threats and causes is to  Freeze.

● Fight or flight connections start in the brain stem and connect to the brain  stem, midbrain, amygdala & hypothalamus. Triggers alarm and involves  decreased serotonin. May be impacted by early experience leading to  increased anxiety sensitivity.

○ Catastrophizing is a way of thinking called a 'cognitive distortion.' A  person who catastrophizes usually sees an unfavorable outcome to an  event and then decides that if this outcome does happen, the results  will be a disaster.

● So how do we manage anxiety? We have to break the cycle of avoidance ○ Exposure Therapy

● What we think affects how we feel and act

● What we do affects how we think and feel

● What we feel affects how we think and act

○ Medications with efficacy for SAD

■ Constant thoughts about whether or not the oven was turned  off, even after checking once

■ Obsessions cause strong uncomfortable feelings of anxiety. The person feels compelled to act and remove the discomfort

■ Repeatedly checking to confirm that the oven is off.Possibly  going to great lengths to do so such as traveling home from  work.

■ The individual experienced fleif from their anxiety. However,  the obsessive response has been strengthened for the future.

○ Occurs when people can’t let go of that anxiety

■ OCD presents a wide range of severity and disability

● Relaxation training may be used

■ Increased activity in the frontal lobe of brain

○ Responds to CBT and SSRIS

○ Acquisition and difficulty getting rid of things 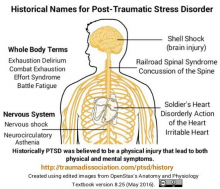 something that would be traumatic to anybody, not just vets ○ Historically PTSD was believed to be a physical injury that lead to both physical and mental symptoms

○ Involves talking about trauma with a provider and doing some  of the things you have avoided since the trauma.

○  Teaches you to reframe negative thoughts about the trauma ● Eye­Movement Desensitization and Reprocessing (EMDR).  ○ Helps you process and make sense of your trauma. It involves  calling the trauma to mind while paying attention to a back

and­forth movement or sound (like a finger waving side to side, a light, or a tone).

○ Or excessive response to symptoms

○ Used to be called Hypochondriasis.

○ Characterized by major concerns about physical symptoms even if  they are normal sensations.

○ Also involves a “disease conviction”  which makes it hard to  convince people that they are not ill, even if there is no evidence. ● Somatic Disorder

○ Associated with depression and anxiety

○ Tends to run in families and be more common in women ○ The more you focus on sensations the stronger they become.  ○ Can be culturally influenced

○ CBT and medication such as SSRI’s can help

○ Physical malfunction which can involve vision, motor or other  symptoms but lacks actual pathology

○ Not always distressed by loss

○ Freud thought it was due to unconscious conflict

■ Benefits from being sick

■ Factitious Disorder can be imposed on another

○ Sense of detachment self or environment

■ Separate from reality may help is cope in the short run

■ Related to suggestibility and hypnosis

■ Due to brain injury, irreversible

■ Failure to remember an event

○ Memory loss for an event

○ In some cultures and belief systems dissociation may be described as  possession, or a trance.

○ Defining feature is dissociation of personality and adoption of new  identities

○ Person might not be aware of the different personalities and may  consider them as blackouts.

○ We can all dissociate under duress, but some people may be more  prone.

○ Could also be PTSD with extreme dissociation

○ Memory is not infallible, can be disordered or altered

○ People who are prone to false memory creation made more false recall errors on laboratory tasks, and were more suggestible, and depressed ○ Children are not reliable witnesses

How to calculate how many calories are in a portion of food?