Description: This study guide covers the information that might appear on the midterm exam.

● Definition: all of the mental processes involved between receiving perceptual input and responding

○ Storage: the systems we have to maintain information

■ the “format” in which the information is in the storage system

■ the amount of time information is retained in our storage system

What is software in human cognition?

■ under what circumstances information is retained in our storage system

● Visual information goes to occipital lobe then to the posterior parietal lobe (“where” system) and inferotemporal cortex (“what” system) We also discuss several other topics like Aortic valve sounds refer to what?

● Step-by-step process: Visual input hits cornea → our lens inverts the image → hits receptors in the back of the cornea → sends information to the brain

What is storage in human cognition?

Don't forget about the age old question of A sole proprietorship means what?

● We have a tendency to group certain things together based on their properties ● Law of proximity: objects near each other tend to be grouped together

● Principle of similarity: items that are similar to one another are grouped together ● Law of continuity: human eye will follow the smoothest path of lines

● Principle of closure: we fill in missing information between gaps/lines in order to create familiar shapes/images Don't forget about the age old question of What is a hematocrit?

● Law of Pragnänz: we parse things in the most simple & organized ways

● We cannot recall all letters that are briefly presented to us

○ Wanted to figure out if this is due to time

● Results: subjects were able to report nearly 100% of the letters in the cued row

● Suggests: all information is available/retained for some period of time, but the longer we wait to report them, the less that is retained (more decay)

● Precategorical → no coding for the meaning of stimuli

○ Everything is initially processed but not thoroughly

● Forgetting due to decay

● Can be erased by subsequent visual input We also discuss several other topics like What is the definition of stenosis?

○ The next thing occupies the resources of Iconic Storage resulting in

replacement/forgetting of the previous information

○ Word superiority effect: easiest to report letters when they form a word rather than when a letter is presented on its own or within a string of letters that do not form a word ○ Why? → we identify them as meaningful wholes rather than 4 separate letters ■ Top-down processing: prior knowledge/experience helps form expectations of what you will see → words have meanings so we encode it easier We also discuss several other topics like Who explores the louisiana purchase lands?
Don't forget about the age old question of What is a veneer?

● The higher the approximation to English, the better people are reporting the letters from a brief presentation

● Recognition-by-Components Model: We approach object identification in a bottom-up manner in which we first identify the basic features and shapes (‘geons’) that make up the object, then we achieve object representation by putting the features together

○ Model Assumption: different arrangements of the same components make different objects; the difference in the way in which these components are organized lead us to interpret the object differently

○ Hypothesized: only 2-3 geons are sufficient for identification of objects

○ Results: identification is pretty accurate even without all of the geons present ■ The more geons missing → the longer it takes to identify an object

● Top-down processing: we bring outside knowledge which leads us to expect certain properties to appear in certain settings

● Amplitude: intensity/loudness (height of the wave)

● Period: amount of time to complete 1 vibratory cycle (from peak to peak)

● Frequency: # of wave cycles completed in one second

■ Speech is a forced vibration

● Places of articulation: where we choose to stop/constrict airflow when producing speech ○ Palatal → tongue hits the palate ([j])

○ Dental → tongue hits the back of your teeth

○ These are only some examples, there are more

● Bottleneck Problem: we cannot transfer all information out of temporary storage to more permanent storage due to limited capacity

● Dichotic listening tasks: participants listen to a different message through each ear and repeat only what they hear in one ear while ignoring the input from the other ear. Then they are asked to repeat what was said in the unattended channel

● Sometimes we do not notice things that are right in front of us...why?

○ Limits on perception → we literally do not see/hear the stimuli

● Early selection hypothesis: we immediately direct all our attentional resources to the attended input and never perceive/analyze the unattended input

■ Our attentional system filters out large segments of input, we attach meaning later in the process

● Late selection hypothesis: we relatively analyze all inputs but select what to pay attention to before analysis is complete

○ All sensory channels are processed but only one goes to awareness

■ Lower thresholds of recognition (e.g. your name) → more likely this input will be processed

○ E.g., hearing someone say your name across a noisy room even if you weren’t paying attention to anything else they were saying

● Inattentional blindness: inability to process things we are not directly paying attention to, even if the stimulus is right in front of us

● Change blindness: inability to detect changes in scenes directly in front of us ○ We think we remember/notice more in our environments than we truly do

○ Hypothesized: knowledge of the location of a signal can affect the efficiency of processing signals that appear in that location

○ Subjects told to respond as soon as they saw the signal

● “Glue”: attention is the synthesis of separate features of a single stimulus/object ○ Mere spotlight on individual features does not integrate them together

● Visual search procedure: searching for a unique item in a display of distractors ○ If the target differs from the distractors on only one feature → easier detection ■ Parallel search: fast & independent on the # of distractors; happens when we don’t have to “glue” together multiple features of the target

■ Serial search: slow & dependent on the # of distractors; we need to consider each individual feature to see if it matches the criteria

○ This is because when there are more differences, we have to pay attention to the conjunction of features

● “Object files”: temporary object representation created by combinations of the separable features of an object

● Controlled processing: identification occurs through a serial comparison of input to the characteristics of the target stimuli

○ The more experience we have with an event, the fewer attentional resources we need to allocate on the event to succeed

● Usually we engage in controlled processing, but with practice we can reduce attentional resources needed and become more automatic at the task.

● “Magic Number”: how many items can we retain in immediate memory after a single presentation? → 7+/-2 (could be individual items or chunks)

○ “Chunking”: parsing items into chunks rather than remembering them individually will increase the amount of information we can retain (e.g. “562” instead of “5,6,2”) ○ Span of apprehension → # of stimuli we can simultaneously attend to (process at once) ○ Span of immediate memory → the # of items a person has the ability to remember ● Working memory is also involved in other cognitive tasks besides simple rehearsal & temporary storage

○ Cognitive Load Theory: Subjects do worse on reasoning & comprehension tasks when they have a large memory load → suggests WM is also involved in these tasks ○ WM correlates with every major assessment of intelligence in use today (such as measures of IQ)

● Recency effect: recall is better for items at the end of a list

○ This is because these items are still in working memory

○ No new items are entering STM, so these items are not replaced

● Primacy effect: recall is better for items at the beginning of a list

○ This is because there was more rehearsal & items transferred into LTM

○ The more times you rehearse an item, the more likely it will transfer to LTM ○ There is a limited capacity of STS (7+/-2), so when new items come in they replace information that was currently in STS

○ If an item does not receive any rehearsal, it will decay from short term store and be forgotten (never transfer to LTM) 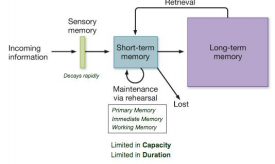 ● Separate WM systems for the 2 kinds of information

● There are different kinds of LTM

● Two kinds of rehearsals can transfer information from STM to LTM

○ Maintenance/rehearsal → simply repeating the input over & over again 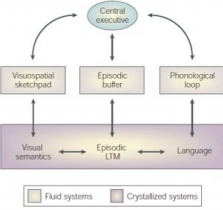 ● The deeper the processing, the more likely you will encode information (e.g. “pleasant” vs “does it have a letter e?”

● State Dependent Learning: Retrieval is better/more accurate when you are in the same mental or physical environment as you were in when you were encoding/learning the information ○ Suggests that we learn about the context in which information is presented/learned ● Recall vs recognition

○ Recall: remembering information without any prompting (not a lot of context given) ■ E.g. free recall tasks → write down all the words you remember

○ Recognition: being presented with information & determining if you’ve seen it before ■ E.g. recognition tasks → was this word on the study list?

○ Intentional: you know you will be tested on the information

○ Incidental: making connections between the learned material and old information will allow for better retrieval even though you were unaware that you would have to recall the information later on

● Interference: the more similar items are, the more difficult it will be to recall them individually ○ The amount of time you have to process incoming information

○ Retrograde Amnesia: loss of memory for events before the accident

○ Anterograde amnesia: loss of memory for events after the accident

■ Inability to acquire new semantic & episodic information and encode it into LTM ■ E.g. Patient HM → cannot explicitly remember some events but evidence that his implicit memory is still working

○ Is failure of LTM due to problems with encoding or retrieval?

○ We expect positive to be faster than negative, on average

○ We expect positive & negative response times to be the same

○ On average, the # of comparisons that will be made on positive trials will be (S+1)/2 (where S= set size)

● Implicit memory: memory without awareness; can influence our behavior without our consciousness

● Mere Exposure Effect: exposure to stimuli makes it seem more preferable to subjects even if they don’t explicitly recall seeing them in the past

○ E.g., seeing “dog” in small blue font & then seeing it again in large green font ● Associative priming: being asked to generate an associative to the stimulus will make later identification quicker

○ E.g., shown the word “doctor” & you generate “nurse”, you will be quicker at identifying “nurse” when it appears

○ E.g., seeing “doctor” implicitly activates representation of “nurse” so when you see “nurse” you are quicker at identifying it

Confucius is a chinese philosopher/scholar/politician during the first half of?

What is the definition of gender-based division of labor?