CARLETON UNIVERSITY / Neuroscience / NEUR 2201 / Why do stimulus cause an action potential?

Why do stimulus cause an action potential?

Why do stimulus cause an action potential?

Description: these notes cover material that will be on the exam

How does a stimulus cause an action potential?

 Generation of the action potential

 Properties and selectivity of voltage-gated ion channels including calcium, sodium,  and potassium

 Recall the ionic movement underlying the generation of the action potential   Compare the structures of calcium, sodium and potassium channels  o Each channel have properties which allow them to be selective (ion  selectivity mechanism)

 Relate the activate, deactivated and inactivated states of the sodium and  potassium channels to the action potential phases

What happens to sodium and potassium during action potential?

 Ionic movement underlying the generation of the action potential   Structures of the calcium, sodium, and potassium channels

 How the activated, deactivated, and inactivated states of the sodium and  potassium channels relate to the action potential phases

 The signals are generated through the central nervous system.

 the nodes of Ranvier have lots of sodium and potassium channels that are voltage  sensitive.

 action potentials drive the opening of the channels to allow the action potential to  propagate down the length of the Axon terminal Don't forget about the age old question of Do abused parents become abusers?

 it’s a depolarization response not an all or nothing response

 sodium ions are distributed through the terminals (the collaterals) – its not an  action potential when its in the nerve terminals, it’s a depolarization that then sets  off the opening of the calcium voltage gated channels

What would happen if the voltage gated sodium and potassium channels opened at the same time?

 the calcium ions then come in and cause NT release.

 When GABA is released onto GABA receptors, they open up and allow chloride to  come in leading to hyperpolarization’s

 The waves of sodium concentration and chloride concentrations move down to the  terminal  If you want to learn more check out Notre dame in paris is a what church?

 Go on presynaptic side which can shut down NT release

 These are all influencing the neuron and there are metabotropic G protein coupled  responses and ligand gated ionotropic responses in the distal dendrite.   The closer the inputs are to the axon hillock, the more influential they will be.   When there is a higher negative inside relative to outside the neuron is at rest.

 Then when there is a depolarization and it hits the threshold theres enough sodium coming in close to the cell body and axon hillock that it will cause the voltage  gated sodium channels to open.

 The Na+ channels open because the amino acid sequence is pushing up and  twisting open so the sodium comes in and leads to a rise in the action potential.   Then there is the absolute refractory period where you cannot generate another  action potential because there is another part of the Na+ channel which is the  voltage sensitive part that closes because the ball comes in and plugs the channel  so there cannot be another action potential.  If you want to learn more check out You perform a cross between a heterozygous tall pea plant and a homozygous short pea plant and obtain 30 tall plants and 20 short plants in the f1 generation. assuming standard mendelian inheritance of this character, how many tall and short plants would

 during the relative refractory period, the non-voltage sensitive gated channels  open and the voltage sensitive part is closed so you can generate another action  potential but it just needs a stronger depolarization  We also discuss several other topics like Who designed a tabulating machine for the census bureau in 1890 which used a punch card system?

 Within the plane of the membrane, a ring of negative/ positive charges  forming the selectivity filter for cations/ anions

B. Four subunits tetramerize to form an ion channel with a central pore-forming unit  (orange) surrounded by four VSDs (green). Make a 3D pore with the voltage  sensitive domains on the outside

C. A change in membrane voltage moves S4 charges in outward direction leading to  the opening of the ion channel.  We also discuss several other topics like What exactly is inequality?

o A change in the membrane voltage pulls the connected transmembrane  domains outwards, out of alignment, to cause the channel to open. 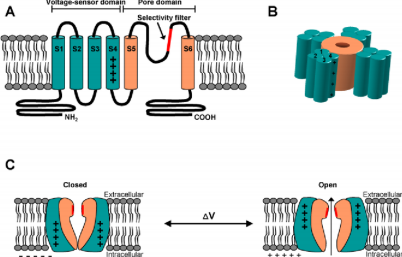 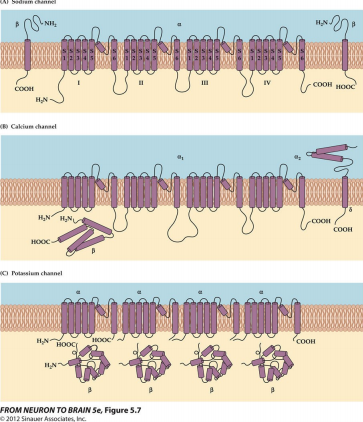 Don't forget about the age old question of What is additive model?

- The amino acid sequence is continuous from the start to the finish. It is  relatively fixed

- The beta subunits are modulatory and they dictate how the sodium channel  responds to voltages.

- The main structure is the alpha unit made up of the four subunits  - In the calcium channel, the different units have a large effect on the channel.  The channel is very flexible

- The potassium channel: each of the 4 subunits are separate. There are 4 alpha  subunits and there is a gap in between them. Very important for

hyperpolarization. There are many different types because the subunits are  interchangeable and modulatory. By changing which ones can fit in there you  are changing the channel

o Positive charges respond to depolarization and push the S5 and S6 out of  alignment to open up the channel.

 S5-S6 region forms the pore domain through which sodium ions flow. And. This is how you get selectivity to ion movement

o So now with a positive inside with calcium on the outside, the S4 is being  pushed up out of the way and the channel is opening through the S5-6 region and it is serving as the selectivity domain

o The basic building blocks S1-6 and other components modulate how the  channel works and the property of pushing the S4 domain up can be altered,  stopped, facilitated 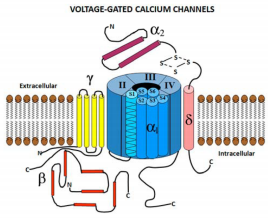 - S5-6 on outside, making the pore and selectivity filter

- N-type calcium channels are on the nerve terminal 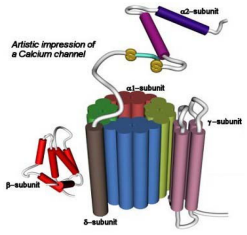 - The subunits modulate how the channel works

- S4 has a lot of positive charges. Intracellular positive depolarization pushes it up and opens the pore through the S5 and S6 domains.

- Focus on the alpha 1 subunit

o These channels respond to depolarization. What. Matters is that there is a  positive charge on the inside 6

o This repels the S4 segment, and acts on the S5-S6 segment which allows  only Na+ channels to flow through

o they are separate- not hooked on

 The ring forms the narrowest level of the open pore

 The conformational flexibility of the side chains stabilizes multiple ionic occupancy  states, helping sodium ions to pass through the selectivity filter 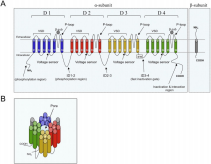  This channel becomes active. It has voltage sensors.

 When there is an action potential, the voltage sensors are responding to the  positive ions inside, and pushing up the S5.6 domains, opening up the pore and  you see a rise in the depolarization

o When they push up, it allows Na+ ions to come in

 During the absolute refractory, the voltage insensitive part is closed  o In the hodgkin/ huxley: Theres one S4 unit that isn’t pushed up in the open phase. It gets pushed up in the inactivated phase which causes the channel  to close

o The channel becomes inactivated. It is no longer voltage sensitive and  that’s what underlies the absolute refractory period of the action potential   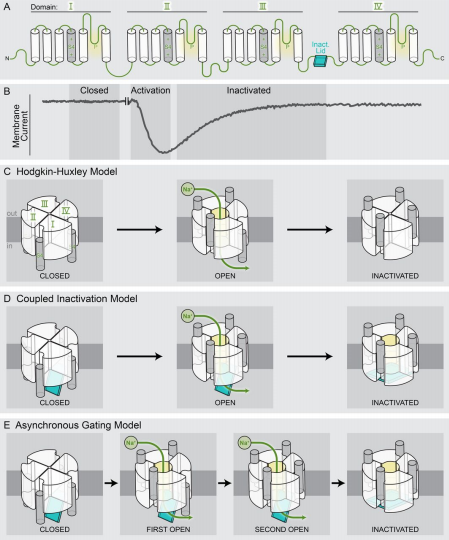  The S5-S6 has a selectivity filter which allows only sodium to come in   The conformational flexibility of the side chains stabilizes multiple ionic occupancy  states, helping sodium ions to pass through the selectivity filter

o Still has 6 transmembrane domains and the S4, S5, S6 that make up the pore  S4 is the voltage sensor

 S5-S6 is the pore that makes up the channel

 4 subunits together looking into pore from extracellular side 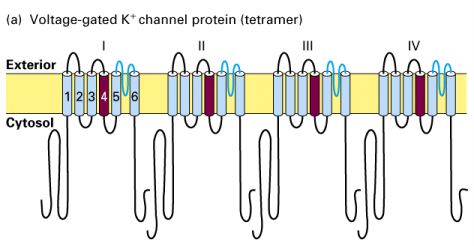 o Beta are close together but not touching

o You can swap out the channels, change the amino acid sequences and  change the way it functions

 Its kinetics (how it responds)

 The stimulus that Na+ responds too also causes a response in K+ channels.   Theres none under the myline but in the node of ranvier theres packed Na+  channels interlaced with potassium channels

 There are four potassium binding sites in the selectivity filter (s1-s4)  In the open (active) configuration, can be occupied by two water molecules and  two potassium ions

 The inactivating particle is separate (ball and chain) that pops in  o Also has effects on the other segments. The ball swings in to close the  channel after allowing ion movement 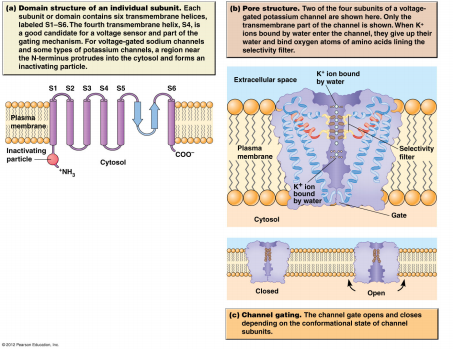  Activation: appropriate stimulus increases probability of openings (rising phase) o . a depolarization. S4 is pushed, S5,S6 open up and there is movement of  sodium = rising phase (from threshold to peak potential)

 Deactivation: frequency of openings is decreased (relative refractory) o The S4 segment. Comes back down, goes into resting state, pulls the  amino acid sequences tight on S5 and S6 and closes the channel

o The channel is activated and there is a closing triggered at threshold. Closed  not capable of opening = inactivated. This is the ball and chain mechanism  that is independent from the transmembrane domains 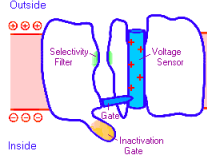 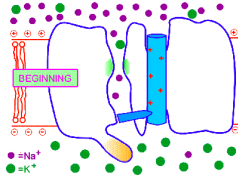 - The selectivity filter keeps potassium out

- Inactivation – the ball and chain closes up. Is a matter of timing

- Ionic movements underlying the generation of the action potential

- Structures of them calcium, sodium and potassium channels

- How the activated, deactivated and inactivated states of the sodium and potassium  channels relate to the action potential phases

What causes democracy and democratization?

How many people are there in the us base on the 2010 census?