AU / Geography / GEO 1100 / What is the difference between mafic and felsic rocks?

Description: Hey guys, I put together a brief study guide for the first test, it has some questions about important terms and matching. I hope this helps with your studying!

1. What is the difference between mafic and felsic rocks?

3. Explain the difference between silicates and non-silicates.

4. What is a Ferromagnesian Silicate? Give an example.

5. What is a Non-Ferromagnesian Silicate? Give an example.

6. What are Igneous Rocks?

9. Briefly explain the formation of silicates.

10. Explain the Law of Superposition and Law of Original Horizontality. Who came up with  these laws?

13. Explain the 4 steps of the Scientific Method.

Explain the difference between silicates and non-silicates.

14. Why is the moon important?

15. What is the difference between cleavage and fracture? Give an example of each. 16. List 5 of the defining properties of a mineral.

Answers can be used once, more than once, or  not at all

5. Iron (Fe) Don't forget about the age old question of What are large molecules necessary for forms of life?

1. Phosphate  If you want to learn more check out Is correlation and causation are the same?

What are igneous rocks?

We also discuss several other topics like How does the ohio supreme court get cases?

a. SO4 We also discuss several other topics like What is constitutional isomers of alkanes?

a. Rock trapped inside another rock

c. Great mass that used to be the magma  chamber

d. Solidified magma in the throat of the  volcano

f. Horizontal intrusion that pushes rocks above  it

a. Composed of water

b. Composed of gas

1. Mafic rocks are darker in color with lower levels of silica, which means they have a low viscosity.  They have an increased amount of Calcium, Iron, and Magnesium. Mafic rocks have Ca-Plagioclase,  Pyroxene, Olivine, and a little bit of Amphibole.

Felsic rocks are lighter in color with higher levels of silica, which means they have a high viscosity.  They have an increased amount of Sodium and Potassium. Felsic rocks have Quartz, K-Feldspar,  Muscovite, Biotite, and Amphibole. Don't forget about the age old question of What is deconstructing conflict?

2. A mineral is solid, inorganic, natural, has a specific chemical composition, and has a crystal-like  pattern.

4. A Ferromagnesian silicate has silica, is denser, and is mafic. Some examples are Olivine, Pyroxene,  and Garnet.

5. A Non-Ferromagnesian silicate is less dense and felsic. Some examples are Quartz, Plagioclase  Feldspar, Orthoclase Feldspar.

6. Igneous rocks form from the crystallization of lava or magma.

Extrusive rocks form above ground from lava and are usually mafic. Extrusive rocks do not have  crystals because they cool too quickly for the crystal lattice to form; they typically have fracture.

8. Phaneritic rocks have distinct crystals that are visible to the naked eye

Aphanitic rocks did not have time to form crystals; they are not visible to the naked eye Porphyritic rocks have distinguishable crystals of different sizes

9. Silicates form inside a magma pocket with high levels of silicon and oxygen along with normal  levels of aluminum, magnesium, calcium, iron, potassium, and sodium. As the magma begins to cool, a  silicate tetrahedral (4 oxygen bonded to 1 silicon) is formed. Magnesium, iron, and calcium are the first to bond to the silicate tetrahedral to neutralize the charge and stabilize the bonds. Now that the  substances are stable, other elements can bond to create different minerals.

10. The Law of Superposition states that superficial layers of rocks are younger than deeper layers of  rocks.

The Law of Horizontality states that sediments that flow into a body of water must settle horizontally. Nicholas Steno discovered both of these laws. 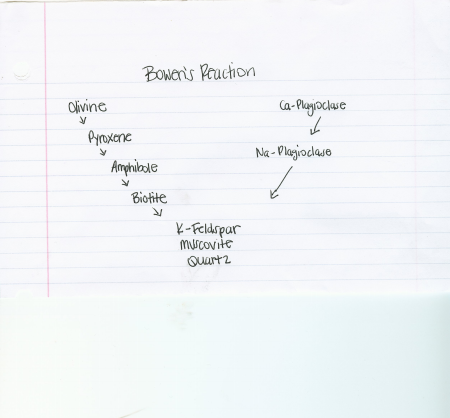 12. The silica tetrahedral has 4 oxygen molecules bonded to every silicon molecule. It has a charge of  -4 so it bonds with other elements to negate the charge.

13. First the problem must be defined and then data is collected and evaluated. Next, a hypothesis (a  scientific explanation) must be formed, and finally the hypothesis must be tested.

Why we live according to our environment?

What is developmental behavior genetics?