Description: Ch4-6 with some practice problems

o Increases from left to right

Which is an ionic compound?

∙ Ionic radius= the radius of a cation or an anion

∙ Lattice= 3D array of cations and anions in an ionic compound

∙ Lattice energy=measure of how stable the ionic compound is

What are examples of polyatomic ions?

If you want to learn more check out Have you ever worked in fast food?

∙ Law of Multiple Proportions=if 2 elements can combine with each other to form 2 or more different compounds, then the ratio of masses of 1 element between the 2 compounds can be represented by a whole number

∙ Diatomic molecules= contain 2 atoms; can be the same element or different  elements

∙ Homonuclear= elements are the same

∙ Molecular formula= exact number of atoms in each element

∙ Anhydrous= when hydrate is heated and the water molecules are driven off;  often can cause the substance to change color

∙ Molecular mass= sum of atomic masses in a molecule of atoms; only for  molecular compounds

o Ionic Compounds: between metal and nonmetal; neutral If you want to learn more check out What is pahoehoe?

o Acids: contains enough hydrogen to cancel out the charge of the other  element

 Add –ic to the end

o Oxoacids: contains enough hydrogen to cancel the charge of the polyatomic  ion( that contains oxygen) 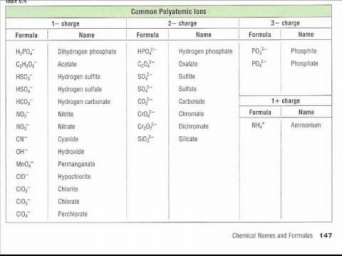 ∙ Formal charge= valence - (lines+dots); must equal the overall charge of the  compound

∙ Types of bonds that can form:

∙ How to know what type of bond

o Look at the difference it atoms electronegativity

o If the atoms electronegativity differs by:

∙ Dipole moment= the measure of the polarity of a bond; also indicates direction  of electron shift

∙ charge of separation→ represented by δ (+ or -)

∙ Exceptions to the Octet Rule:

o Group 3A can have less than 8 valence

o Period 3 and beyond can have more than 8 valence

3. Name the compound or write the formula

6. Don’t foget to memorize the elements and their symbols

What are the two ways o2 is transported in blood?

What is fact retrieval?