Can myofibers facilitate action potential conductance throughout the

Can myofibers facilitate action potential conductance throughout the

Description: Study aid for the second Vertebrate Physiology exam. Summaries and notes from each section outlined to be covered.

Myofibers can facilitate action potential conductance throughout the?

∙ Property of excitability that gives neurons the ability to store, recall and distribute information ∙ During depolarization charge difference between the inside and outside of the cell membrane  decreases, membrane potential becomes less negative

Motor neuron axon termini are located in a?

∙ Binding of neurotransmitter to a specific ligand-gated receptor causes ion channels in membrane  to open or close, changing permeability of membrane

∙ Graded potentials vary in magnitude depending on strength of stimulus

∙ The amplitude of the graded potential directly reflects strength of the incoming stimulus ∙ Graded potentials can either hyperpolarize or depolarize cell, depending on type of ion channel  that’s opened/closed

∙ Opening Na+ or Ca2+ channels will depolarize a neuron

Removal of neurotransmitter depends on what proccesses?

Don't forget about the age old question of What is the most common type of lava?

∙ Opening K+ or Cl- channels will hyperpolarize a neuron 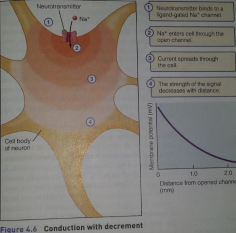 ∙ When neurotransmitter binds to a ligand-gated Na+ channel, the channel open and Na+ ions  move into the cell

∙ Extent of this depolarization decreases as it moves farther and farther from the opened channels ∙ Action potentials are used to transmit information across distances of more than a few  millimeters If you want to learn more check out When was jacopo tintoretto painted stealing the body? 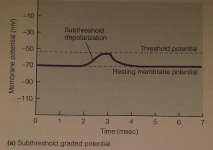 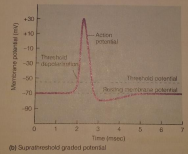 ∙ Graded potentials from different sites can interact with each other to influence the net change in  membrane potential at the axon hillock (spatial summation)If you want to learn more check out What are the nonvolatile nonelectrolyte solutions? 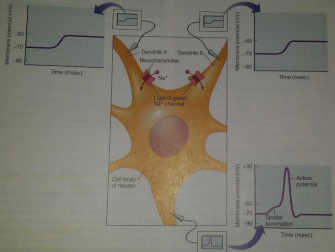 Don't forget about the age old question of What is the best definition of elasticity?
We also discuss several other topics like What is the mean reaction time? 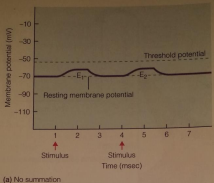 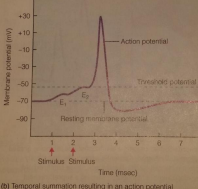 Signals in the Axon

∙ Changes in membrane potential change the shape of voltage-gated ion channels, allowing ions to  move across the membrane

∙ Making the intracellular side of the membrane more negative

∙ To open, Na+ channel undergoes a conformation change that opens an activation gate allowing  Na+ ions to move across the membrane

∙ With the inactivation gate closed, no more Na+ can enter the cell, terminating the depolarization  phase of the action potential

∙ In response to changes in the membrane potential caused by the actions of the voltage-gated K+  channels, the inactivation gate resets and the channel returns to its initial conformation ready to  initiate another action potential 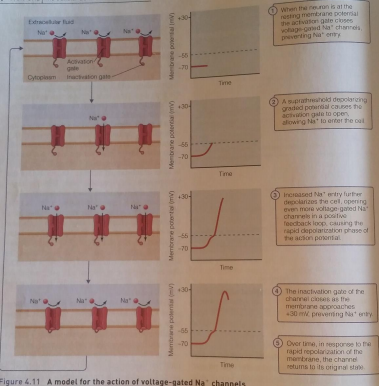 ∙ Action potentials can be conducted across long distances without decaying

∙ Action potentials only occur in the nodes of Ranvier

∙ Electrontonic current spread is much faster than generating an action potential 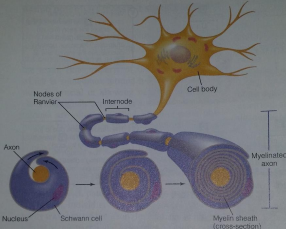 Figure 4.14: Structure of the myelin sheath

∙ Action potentials occur only in the downstream direction 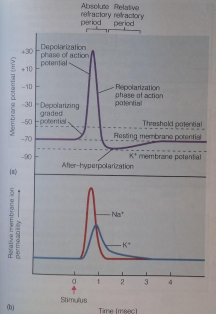 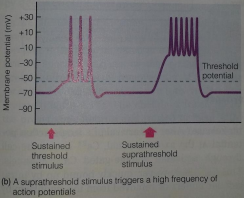 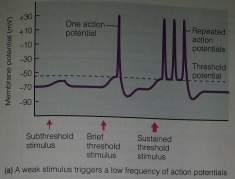 Signals Across the Synapse

∙ Readily releasable pool of vesicles is located at the active zone of synapse, bound to docking  proteins at synaptic membrane, ready to release contents by exocytosis

∙ Ca2+ signal also causes vesicles from storage pool to move to active zone of plasma membrane  and bind to docking proteins, ready for release following subsequent action potentials ∙ Because each vesicle contains many molecules of neurotransmitter the amount of  neurotransmitter a neuron releases increases in a step fashion, each corresponding to contents of  a vesicle, rather than smoothly graded fashion 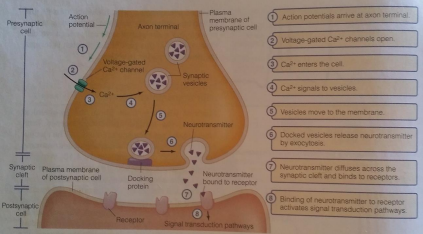 Figure 4.16: Events of signal transmission at a chemical synapse

Signaling is terminated by acetylcholinesterase 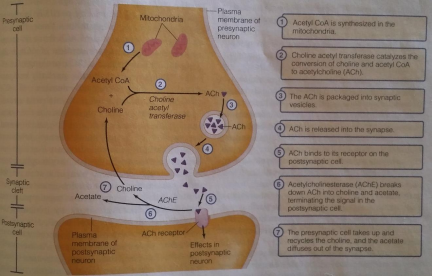 Figure 4.17: Synthesis and recycling of acetylcholine (ACh) at synapse

∙ Have ability to bind to nicotine

∙ Neurotransmitters can simply diffuse passively out of synapse

∙ Increase in intracellular Ca2+ activates the action-myosin machinery to induce contraction Relaxation occurs when the Ca2+ falls to resting levels, which is only possible when sarcolemma  repolarizes

Muscles are excited by an action potential

∙ Resting membrane potential of sarcolemma is about -70mV

∙ Depolarization is induced when Na+ channels are opened

∙ Pacemaker cells are unusual in that they show and unstable resting membrane potential ∙ Once pacemaker cell membrane depolarizes to a critical voltage, voltage-sensitive Ca+ channels  open to initiate the action potential

Neurogenic muscle is excited by neurotransmitters

∙ T-tubule system is extensive in large or quick-contracting muscles

Ca2+ for contraction comes from intracellular or extracellular stores

∙ Structure of DHPR influences electrical properties such as voltage sensitivity and open time, or  alter the sensitivity of the channel to regulatory proteins and ligands

∙ Upon activation of DHPR, the RyR opens even if no Ca2+ ions move through the DHPR ∙ This pattern of EC coupling: depolarization-induced Ca2+ release 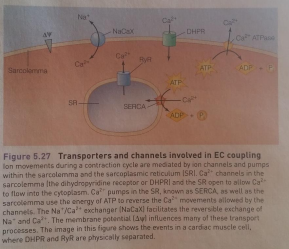 Is ammonia a byproduct of protein?

How is creativity integrated in the curriculum?