Description: This study guide is basically just a compilation of my notes for exam 1. Includes some helpful graphics and examples to better visualize the material. Best of luck to everyone!

What are the three key roles/financial decisions of a financial manager?

∙ Evolution- populations of organisms and their cellular components have changed  over time through both selective and non-selective evolutionary processes ∙ Structure and Function- all living systems are made of structural subunits, which  impact the functioning of those systems

∙ Information Flow and Storage- DNA is the information code for life’ how it is used  and exchanged within and among organisms is the basis of life on the planet ∙ Transformations of Energy and Matter- all living things acquire, use, and release  matter and energy for cellular functioning

What is a sole proprietorship?

∙ Systems- living systems are interconnected, and interact and influence each  other on multiple levels

∙ Link topics and synthesize information, particularly in reference to the FBIs ∙ Ask scientific questions based on models and data If you want to learn more check out quinn mcfrederick

∙ Predict the consequences of changes to systems or pathways

What is a corporation?

∙ The cell is the fundamental structural unit of all organisms

What Makes a Cell a Living Organism

∙ Organisms range from millions of cells to just one

∙ The range of functions for organisms is huge

∙ But they are all alive

∙ Biomolecules are unique to the living world

∙ Atoms are composed of protons, neutrons, and electrons

∙ Each element has numbers to describe it

o Mass Number- equal to the number of protons plus neutrons

∙ Atoms use their outer electrons to bond to each other

∙ However, there are double and triple bonds that may change this ∙ There are multiple types of bonds

∙ Can be polar or nonpolar

∙ Form between ions (typically a metal from the left side of the PT (cation) and a  non-metal from the right side(anion)) (ex. NaCl)

Water as a Solvent

∙ Water is a very effective solvent (the solvent of life)

∙ Water has a unique structure

(primarily due to water’s ability to form hydrogen bonds)

∙ Water is denser as a liquid than a solid (ice floats)

∙ Water is able to absorb large amounts of energy

∙ The concentration of H+is the basis for pH measurement

∙ Basic molecules accept (or pick up) H+ions in the solution

Acts as a base,  tends to attract a  proton

Acts as an acid,  tends to lose a  proton

Can react with  certain

can be a weak  acid

The Structure of Proteins

∙ A distinctive R-group or side chain 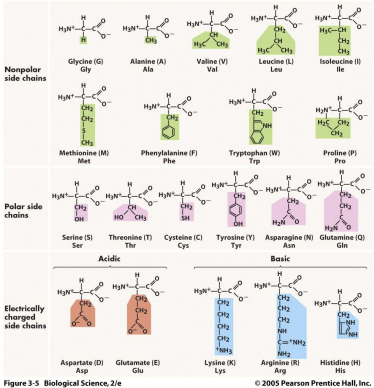 ∙ Side chains can be acidic, basic, polar (but uncharged), or nonpolar ∙ Determining they type of side chain

o Is there an O atom? ???? uncharged polar (there is a polar covalent bond) Side Chains, Functional Groups, and Reactivity

∙ Side chains will contain different functional groups, which will affect their  reactivity

∙ Polar side chains will be hydrophilic (polar likes polar)

∙ Non-polar side chains will be hydrophobic

∙ Peptide bonds form through a condensation reaction between two monomers  (amino acids, in this case)

Important qualities of the Peptide Bond

o The amino end is the N-terminus and the carboxyl end is the C-terminus ∙ Flexibility- the peptide bond itself cannot rotate, but the single bonds on either  side of it can, meaning that protein structure is flexible

∙ The unique sequence of amino acids in proteins

∙ Absolutely fundamental to the other structure levels

∙ Depends on the primary structure, especially  the properties of the amino acids involved Tertiary Structure 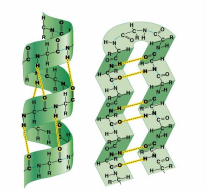 o Ionic bonds- form between groups that have full and opposite charges ∙ All of these different types of interactions can occur in one polypeptide, leading to  very diverse possibilities

∙ Many proteins have multiple polypeptide subunits interacting to make one  structure

∙ The exact bonding that occurs is quaternary structure

∙ Unfolded (or denatured) proteins are pretty much useless

What do Proteins Do?

∙ Catalysis- further explained in the next section

∙ Most enzymes are proteins, but some are RNA

∙ Phosphate Group- always the same, bonded to the 5’ carbon in the sugar ∙ Sugar- middle part of the NA

o Deoxyribose in DNA (missing an O on the 2’ C)

∙ Nitrogenous Base- one or two ring structures containing nitrogen, will form the  inside of the double helix

o Purines- have two rings (Guanine [G] and Adenine [A]

The Formation of NAs

∙ The sequence of the individual nucleotides bonded in

∙ DNA is a double helix (Watson and Crick, Franklin and Wilkins, Chargaff etc.) ∙ Within the double helix, purines can only pair with pyrimidines

∙ Sequencing of bases contains all the vital information

∙ DNA has to be able to replicate itself

∙ It does so through the following process

∙ The cell keeps DNA within the nuclear envelope

∙ The nucleus contains chromosomes, and is surrounded by a double membrane  that has pore-like openings all over it

∙ Do not have a nucleus

∙ Keep DNA in the cytoplasm

∙ RNA is more reactive and less stable than DNA

∙ (Table 4.1 in the book can help with differentiating)

∙ Can function as a catalytic molecule

∙ Has some degree of complexity and can catalyze multiple chemical reactions ∙ DNA is not so versatile, its too stable

RNA and the Beginning of Life

∙ the building blocks of carbohydrates

∙ Can vary in

o Arrangement and number of hydroxyls

∙ Monosaccharides are unique in structure and function

∙ Of the formula (CH2O)n

∙ Exist in alpha and beta forms (depends on the C1 hydroxyl; alpha down beta up) Glycosidic Linkage

∙ Alpha and beta linkages depend on the plane certain atoms land on ∙ Alpha points down in pictures, beta points up

∙ The sugar/energy storage in plants

∙ The energy storage in animals (ex. In the liver and muscles)

∙ Much more branched than starch (to hold more energy)

∙ Structural support of cell walls in plants and algae

∙ Beta 1, 4-glycosidic linkages form parallel strands of monomers that hydrogen  bond with the strands around it

∙ Lysozyme- an enzyme that can break down peptidoglycan

∙ SCs are very difficult to hydrolyze (break apart), while ESCs are easier

∙ Carbohydrates have NO catalytic activity

∙ But they do have many diverse functions

∙ Display information on the outer surface of the cell

∙ The bonds are shared very equally and therefore easy to break to obtain energy  (unlike C—O bonds, for example)

o The glucose from the polymers in broken down

∙ They do not have one monomer like the other biomolecules

∙ They serve many purposes

∙ Fatty acids are the building blocks of lipids

∙ Can be saturated or unsaturated

o Saturated- has no C—C double bonds, hydrogens with every carbon  (excepting the –COOH)

o Unsaturated- contains at least one C=C double bond, creates a kink in the  chain since the carbons cannot rotate around a double bond

∙ (When unsaturated) can be cis or trans

∙ Consist of a glycerol and three FAs

∙ Can be attached to various polar or non-polar side groups (ex. Isoprenoid and  hydroxyl like in cholesterol)

o All are steroids with very different functions

o Polar Head Group- a phosphate and a choline

∙ Such structure makes the heads hydrophilic and the tails hydrophobic Function

∙ Done to learn about the permeability of lipid membranes

What Can Cross a Phospholipid Bilayer?

o Low temps can decrease fluidity and even cause solidification

∙ Does not require an input of energy

∙ Osmosis is the special type of diffusion that involves only water

∙ Primarily occurs when the solute cannot cross the membrane, so water moves  to make the concentrations equal

o Hypertonic- refers to the solution with more solute particles

o Hypotonic- refers to the solution with fewer solute particles

∙ May be as many proteins as phospholipids in membranes

∙ Peripheral Membrane Protein- a protein that lies only on the exterior or interior of  the cell membrane, hydrophilic

o Form a pore in the membrane

o Each kind has specific structure

o There can be many different kinds within one membrane

Endocytosis- a vesicle buds into the cell to bring in

∙ Prokaryotes do NOT have a membrane-bound nucleus

o Their DNA is kept in a single chromosome (nucleoid)

∙ Structure- large and small subunits containing LOTS of protein molecules; may  be attached to ER or free in the cytoplasm

Protein Transport in the Cell

∙ Most proteins are found in the nucleus, peroxisomes, mitochondria, and  chloroplasts

∙ Moving proteins in and out of the nucleus requires energy

Transport and the Endomembrane System

o Follow the tagged proteins to find their path

∙ Pulse-chase found that proteins move from Rough ER to Golgi, to vesicles The Signal Hypothesis

o When synthesis is complete, the signal sequence is removed and the  ribosome and protein detach from the lumen of the rough ER

∙ After the ER, proteins move to the golgi in vesicles

o If the protein is to stay within the ER it will have a special retention tag ∙ Once proteins reach the golgi, they are tagged, sorted, and sent in vesicles and  delivered to their specific sites

∙ Autophagy- the lysosome binds to a damaged organelle to be recycled

∙ Receptor-Meditated Endocytosis- macromolecules bind to receptors and are  engulfed by the cell, the vesicle formed fuses with an early endosome and the pH  lowers, after receiving digestive enzymes, the endosome becomes a lysosome Cytoskeleton

∙ The cytoskeleton is composed of protein fibers and gives the cell shape and  stability. Also aids in movement of the cell and materials within the cell. Very  helpful with organization of the cell.

∙ Intermediate Filaments- make of keratin among other things, resist tension and  anchor some organelles