Description: Condensed version of lecture notes, highlighting key concepts and hitting on the topics stressed by Dr Lindqvist during class

-Towards the end of Hadean, Earth cooled in about 150 million years (fast in  geologic time)

-Earth was bombarded by asteroids, which caused cracks on the surface.  Steam &  gas was released and allowed for the formation of an atmosphere -Clouds formed & rain gave rise to oceans

-Ends between 4.2 and 3.8 billion years ago with first signs of life 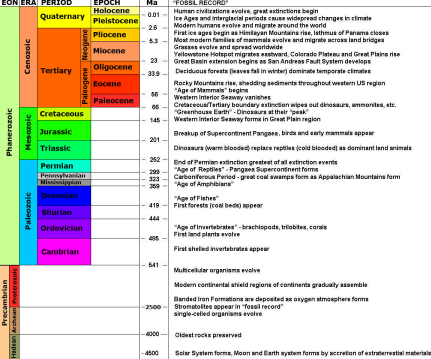 what is History of Evolutionary Theory?

If you want to learn more check out uncp sociology

-All life must have been aquatic

who is Gregor Mendel?

-Little to no UV blocking

4 Steps to Life on Early Earth:

-In early 1990’s we discovered that earth’s early atmosphere was  predominantly composed of CO2 and N2, neither of which were found in  original experiment

-Samplings of the more modern experimental “oceans” that form contain the  building blocks of life (amino acids, nucleotides, sugars, lipids, ATP), and  were formed in only one week

-Polymers (protein, DNA) form when monomers (amino acids, nucleotides)  get together and form a chain

-Would indicate that first life formed near clay-rich shores

-Aggregates of abiotically produced organic molecules surrounded by a  membrane

-RNA can be formed abiotically more easily than DNA can

-Can replicate itself (even more likely in presence of Zinc)

-Has catalytic properties-can act as an enzyme (unlike DNA)

-Recent research suggests that RNA can be composed completely of sugars  and hydrogenous bases, both components that would have been found on  early Earth

-Viroids-may have led to first life

-Tiny particles of raw RNA, smaller than a virus

-Because they cannot replicate on their own, viroids still cannot be  considered life

Do populations tend to overbreed?

Yes- Oak trees put out many more seeds that can possibly survive.  Somewhere  between 0.01-0.1% of seedlings are expected to survive

Do better variations for a particular environment have higher survival rates? Rosemary and Peter Grant- worked on Daphne Major Island in Galapagos -Two of Darwin’s finches live on this island-large and medium ground finch -Variation in head & beak size in medium ground finches

-Survival of these birds is based on seed availability

finches to 200 finches in just one year)

-Birds with longer and deeper beaks out-survived those with

-Abundance of small seeds (can fall out of large beaks)

-Smaller beaked birds survived better than those with large

Do survivors have more offspring and pass on their selected traits to the next  generation?

-Concludes that traits leading to better survival and reproduction must be heritable Why isn’t everyone satisfied?

Implications Involved in accepting this theory:

-Earth must be old enough for evolution to have occurred

-Fossils should show evidence of change through time

-Fossils of intermediate forms must be found

-Hutton & Lyell both believed so

Do fossils show that species are mutable?

-Toxodon- capybara like species 1.5m tall & weighted up to 1.5 tons -Glyptodon-Giant armadillos, 1.5m tall, weighed as much as average sedan -Fossils were closely related to animals alive at the time, but were not the same  species

Do younger rocks strata have more modern fossils than older rock strata? -Lyell’s data on mollusks proved this to be true

Are there fossils of intermediate forms?

-3 years before his death, Archaeopteryx fossils were found

-Has traits of both birds and reptiles-intermediate form

-Parents transmit information about traits to their offspring 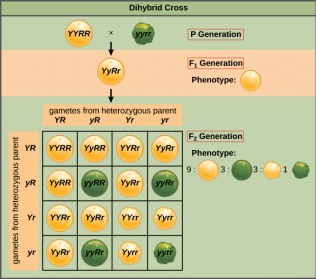 -In Dihybrid cross, alleles of each

-Traits can be controlled by multiple factors

Dominance is Not Always Complete

-Siamese cats- melanin in Siamese cats is due to temperature- near core,  temperature is too high to allow expression of melanin-producing enzyme

Karyotype-Map of set of chromosomes

Chromatids-When chromosomes condense & become visible but before they  replicate

-DNA is diffused and hard to see

-Phase where DNA is replicated

-Mitotic spindle forms-structure that will pull the cell apart

-Kinetochore microtubules, which are connected to the poles, attach to the  chromosomes

-Chromosomes line up at mid-line of cell-Equatorial position

-Chromosomes are condensed and highly quarreled

-Sister chromatids are pulled apart to opposite ends of the cell

-Cell cleaves in half to form two daughter cells

-Each chromosome will end up at each end of the cell

-Daughter cells are genetically distinct & have only half as many  chromosomes as parent cell (when gametes join, there will be the right  number of chromosomes)

Ploidy=number of copies of chromosomes

A cell with one copy is a Haploid (1N)-Gametes

More than two copies is a polyploidy (xN)

-Genes close together on chromosome are tightly linked, while genes further  apart are loosely linked as they can be easily separated during recombination

-Backbone made up of repeating sugar and phosphate units

-Process of copying DNA to RNA

-Replication and transcription occur in the nucleus

-Occurs outside the nucleus

-Adenine pairs with Uracil rather than Thymine

-Made up of amino acids

-All proteins are different combinations of only 20 amino acids

How do Allele Frequencies change?

a. Migration of alleles from one population to another

a. Assortative mating-organisms of similar phenotypes tend to mate  together more often than expected by random chance

b. Founder Effect-When a portion of a population becomes separated  and interbreeds to form new allele frequencies

a. Ultimate source of genetic variation, though not a driving force in  changes to allele frequencies

i. -Codons are not spaced and read in threes

iii. Missense Mutations-also called non-synonymous substitution occurs when one amino acid is replaced by another

iv. Nonsense Mutations- Substitution of a base by a stop codon early termination of translation almost always results in the

loss of function for the protein

i. Deletion-when large chunk of chromosome is deleted, causes a  significant loss of genes

happen in the middle of a gene, it usually has no effect

iv. Translocation-when a piece of chromosome attaches to it’s

non-homologous pair during crossing over

-Occurs when chromosomes fail to separate during metaphase

-Have gained or lost a chromosome

-Monosomy- when a gamete has lost a chromosome-fatal

-Rarely happens in animals & is often fatal if it does occur

-Bananas have 3 sets of chromosomes rather than 2

-Must be variation in the population

-Variation must lead to differences among individuals in lifetime  reproductive success

-Variation must be transmitted to the next generation

-When the environment changes, mean for a trait moves higher or lower Disruptive Selection

-Where extremes exist for each trait range, but there is a very low percent of  population near the mean

-Traits are selected purely because they attract better mates

-Energy-Human eggs are 195,000x larger than sperm and contain far more nutrients -Time-Gestation and child rearing leave females to deal with their choices for years

-Competition through aggression or display-over access to females -Sexual dimorphism-males have special characteristics like horns and antlers for  fighting, and elaborate display characteristics (peacock feathers)

In Absent Fathers, Females look for:

-All of these traits show good genes, clearly the male has been able to survive  & support himself for a long time

-Males show off characteristics that are actually a handicap to their survival -If a male bird has to carry around a huge set of healthy tail feathers (a  handicap to him), he must be especially fit

-When all small evolutionary changes add up to a big evolutionary moment Allopatric: Occurring in separate, non-overlapping geographical areas

4.) Mechanical: different species may have different sex organs, which are not  compatible

5.) Gametic: Chemicals In this case gametes won’t recognize each other and  fertilization won’t take place.

2.) Hybrid fertility: even if an offspring is produced from the mating of different  species usually they are infertile as they generally have a random mixed number of  chromosomes (so it’s not the same even between hybrids).

3.) Hybrid breakdown: if the hybrid results to be fertile, the hybrid population might  breakdown over time (offspring may be less fertile)

arthropods have an exoskeleton made of _____.