Description: I type notes in class on everything Dr. Farmer says and then supplement them with notes from the powerpoints, so this is the complete package! I did very well on the first test thanks to notes like these. Good luck studying!

The notes seem very detailed and helpful since our lectures are all over the place!

What challenges do plants face that animals do not? They cannot move when limiting factors become scarce. Most limiting

factor to most plant land growth: Nitrogen- they need it to make Rubisco from amino acids. To reproduce, they sometimes produce  fruit that animals then spread the seeds of.

• What specializations do plants have to acquire needed resources?  • How are resources shared throughout a plant?

Which partners help plants in acquiring nutrients? Mycorrhizae helps plants suck Nitrogen out of the ground. Rhizobacteria in  We also discuss several other topics like Scientific and systematic study of politics, using methodology.

soil fix nitrogen from the air- especially in legumes.

What is global warming?

• ? What is most of the weight in trees? Water from roots and gases in atmosphere

• Oxygen emitted from plant is the result of splitting of H2O, not CO2 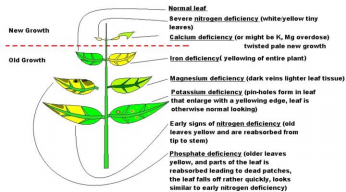 • ? Most limiting factor needed for most plant land growth: Nitrogen

How does nodulation process work?

○ Important because they need it to make Rubisco from amino acids

○ The nitrogen travels through ecosystem in Nitrogen Cycle

Lightning can create high temp and pressure conditions in which N fuses and makes ammonia. We do this in

○ Biological fixation, animals feeding on plants and their waste gets in soil

Some bacteria can take gaseous nitrogen out of air and turn it into ammonia, they fix it in other ways too.

Microbes are responsible for converting N to different forms

○ We are consuming too many plants with our growing population! ○ If we run out of Nitrogen, we will have to make it using fossil fuels.

○ Plants get help from mycorrhizae to suck nitrogen out of ground, in return they give them sugars.  • Rhizobia bacteria in soil fix nitrogen from air

○ Symbiosis: they get fixed carbon (malate, sucrose) from the plant, plant gets biocompatible nitrogen ○ They especially work with legumes Don't forget about the age old question of ucr class

Leghemoglobin is found in root nodules, which acts as an oxygen trap. Which allows for bacteria to efficiently

? What is the source of leghemoglobin in plants? Ancient divergence of gene duplication and divergence. 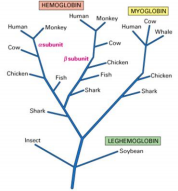 How did bacteria and roots find each other? Plants excrete flavenoid molecules that chemically attract

▪ Bacteria binds to root hairs and enter tissue of plant thru infection thread.

▪ Bacteria are making NodD genes, which activate the genes in plants to produce leghemoglobin If you want to learn more check out hericare

○ Invasion of roots by Rhizobia

○ Bacteria fix nitrogen which is transferred to plant cells in exchange for fixed carbon • Aquatic fern Azolla are symbiotic with cyanobacteria so it can fix nitrogen.

Palm Welfia regia has an epiphyllic relationship with cyanobacteria on its leaves. Bacteria transfer a % of N  through leaf surfaces

• Some plants can do it themselves: carnivorous ones.   Biology Page 2

• How is carbon cycled among life on Earth? • In what forms is carbon bioavailable?

How have carbon dioxide levels varied during Earth’s history? How are levels varying now? It's been increasing  exponentially in the last 200 yrs and is now increasing at 2ppm/yr.

• What mechanisms have plants evolved for acquiring carbon? C4 bundle sheath cells, stoma and guard cells • Is carbon a limiting factor for most plants?

IN THE NEWS: Why might your grandparents be celebrating with a glass of red wine? We also discuss several other topics like samantha swindell

It has Resveratrol, which is a polyphenol. It activates the SIRT1 gene that protects the body from diabetes and aging.  Combats diabetes by preventing insulin resistance. Also combats Alzheimers by protecting nerve cells from buildup  of plaque. Combats heart disease and cancer. Manufacturers are now selling resveratrol supplements with have  extracts from a Japanese plant or red grapes. But the dosage in supplements have not been effective- too low.  People would have to consume 58 L of red wine a day to get the good effects found in animal studies. New study  says that low doses of resveratrol might be more effective than high dose. The mice that were pre-disposed to colon  cancer did better with low doses than high.

There was more coal being made back then from all the trees whereas none is being made now. Why? There  weren't termites or wood-digesting fungi back then.

Symbiosis in termites: termite eats wood and bacteria and protists inside its gut have enzymes that break  wood down and produce fixed carbon products, which are returned to atmosphere.

There is more variability in the Mauna Loa data than the NZ data b/c there are more plants in the northern  hemisphere so the CO2 output is greatly influenced by the seasons/photosynthesis.

• Where does atmospheric CO2 come from?

HW: Other than the burning of fossil fuels, what other explanations can account for the exponential increase in  atm. CO2 in the past 200 yrs?

Marine organisms pull out most of CO2 from atmosphere, so do terrestrial organisms and trees. Oceans absorb  more CO2 than they release

• Plants get the CO2 out of the atmosphere b/c they have an enzyme with a high affinity for CO2: RuBisCO ○ Rubisco is most abundant enzyme

Stoma surrounded by guard cells, whose cell walls can change shape depending on how much water they have.  Advantageous: Retain water when they need it. Guard cells close to keep water in

○ Floating aquatic plants only have stoma on upper surface.

No stoma on fully submerged plants b/c they don’t worry about absorbing/losing water. They get CO2  directly thru diffusion of their thin leaves.

▪ Even though crop plants grow bigger under high CO2 conditions, they are less nutritional  • C4 plants are more efficient at acquiring CO2

As we increase CO2, we increase temp. Higher temp and CO2 are beneficial to a point… but then photosynthesis  decreases and plants are less nutritional 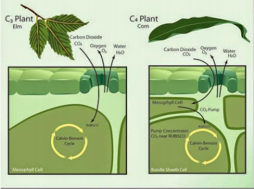 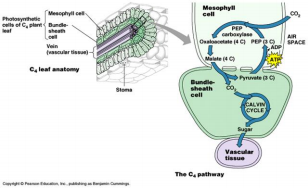 D) All of the above.

E) None of the above.

○ Chorophyll C is ONLY found in red algae!

Methane is powerful greenhouse gas on Earth that is almost always the product of anaerobic metabolism  of bacteria and archaea (Ex: methane gut bacteria let out methane in animal waste)

• Clicker Question Largest source of methane in US: Livestock farming & fracking/coal mine leaks

Rice even has aerenchyma tissue to let methane out from the bacteria in soil thru their leaves.  Aerenchyma is a spongy tissue that forms spaces or air channels in the leaves, stems and roots of  some plants, which allows exchange of gases between the shoot and the root.

Volcanoes release a ton of CO2, but they are erupting at a steady rate over time. Miniscule compared

○ Caused by CO2, methane, and other gases

As molecules absorb infrared radiation the bonds bend and stretch (IR spectra). Most molecules in  our atmosphere play no role in Greenhouse Effect b/c their bending/stretching patterns do not do not  absorb IR at the proper energy level like CO2 does

Radiative Forcing: difference of radiant energy received by the Earth and energy bounced back to  space