Description: These notes cover materials from the review sessions and lectures for the second exam. The study guide has detailed graphs, tables, and explanations for everything mentioned in the lecture and reviews.

Yes YES!! Thank you for these. I'm such a bad notetaker :/ will definitely be looking forward to these

- Progressive taxes: fall more heavily on rich people (the higher the income, the higher  the tax)

What encouraged research and development, technology, and innovations?

*Welfare is negative: There is a welfare loss/ dead weight loss from taxes. 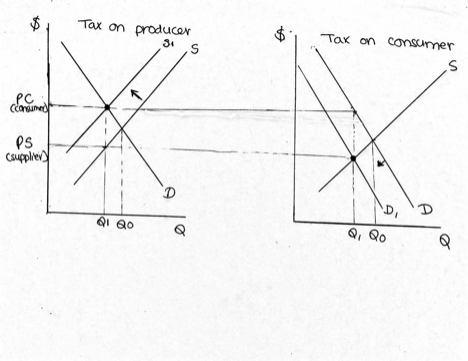 *The graph shows that who you tax (supplier or producer) doesn’t matter. The change of  quantity will be the same.* If you want to learn more check out Proto­ language doesn’t have syntax, and only have words for concrete concepts. has a simple, what?

- Incidence: burden from a tax

- Incidence of a specific tax doesn’t depend on who you tax, it only depends  on the relative elasticity of the supply and demand, and whoever (produce/ consumer) has the more inelastic curve will bare the greater share of the  burden from the tax.

What are the two ways to regulate a high fixed cost monopoly?

- The supply curve is steep (inelastic)

-The price change for the customer is less

than the price change for the producer

-The supplier has more burden from the tax

because of the inelasticity of the supply

- The demand curve is steep (inelastic) 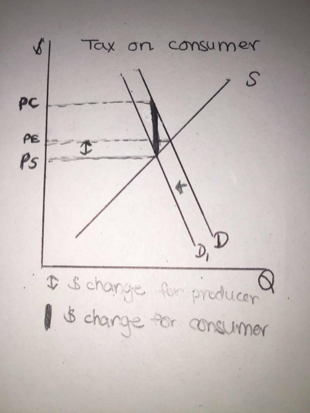 If you want to learn more check out Water vapor converted to a liquid; latent heat is released; atmosphere must be at saturation.

- The price change for the producer is

less than the price change for the

- The consumer has more burden from

the tax because of the inelasticity of

- Excludable: can prevent somebody from using it (things you have to pay for) - Rival: something that is congested

- There is a deadweight loss if the 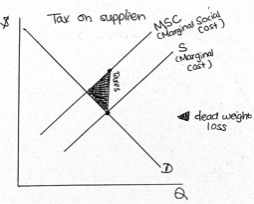 market operates where demand and

-There is a welfare gain with

pigouvian taxes, if the market goes

back to the equilibrium where supply

and demand intersect, there is  We also discuss several other topics like What are the two main roles of dna?

- There is a deadweight loss if the market

- The pigovian tax (MSB curve) makes the  If you want to learn more check out What does culture do?

* Possible test question: There is NO welfare lost in a pigouvian tax, there is only  welfare gain*

- Excludable: can prevent somebody from using it (things you have to pay for) - Rival: something that is congested

* Possible Test Question: How do you allocate public goods?*

•If wage is above E (Equilibrium), then 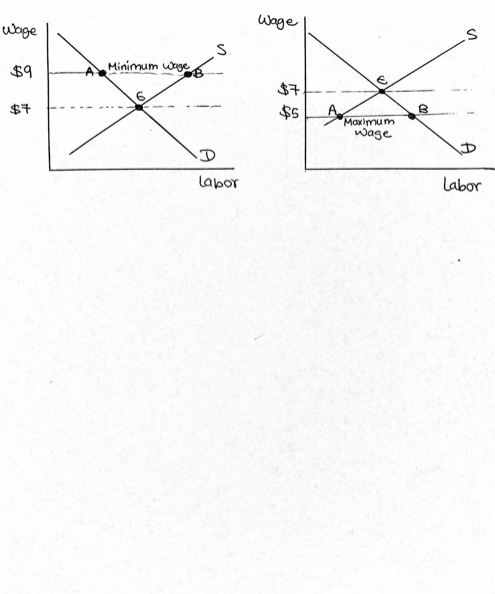 the quantity demanded for labor is less

than the quantity supplied for labor

•There will be an excess of labor

•If wage is below E (Equilibrium), then

the quantity demanded for labor is

higher than the quantity supply for labor

•There will be a deficit of labor causing

the wage to go back up to the

•Maximum wage is ineffective because

the price will always go back to E.

- Price cannot be controlled by firm or industry (controlled by the market), but  industries can manipulate Marginal Product of Labor

-To raise wage, shift the demand curve up

• To raise wage there must be an increase in human capital (HK), physical  capital (K), or technology (T)

• To accumulate capital for growth:

- There is a a welfare loss from monopoly 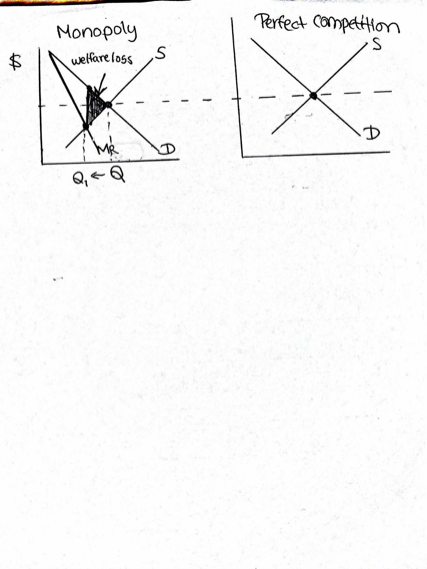 • doesn’t have high fixed cost (everything is cheaper)

• output is not regulated, but the number of stores allowed to open is regulated  (example: There can only be 3 Walmarts in Miami)

Possible Test question: What is the type of firm that is set by regulating output? - high fixed cost monopoly

Possible Test Question: What are the two ways to regulate a high fixed cost  monopoly? 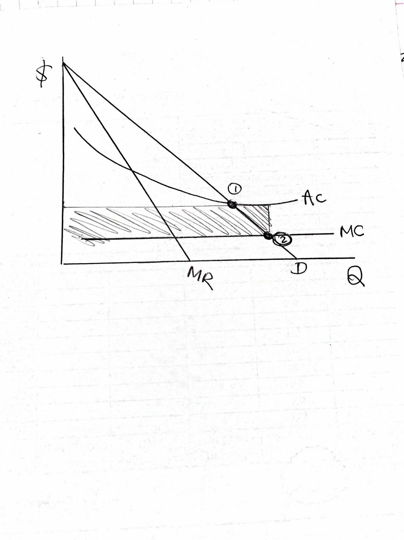 - results when players optimize by only looking out for themselves  - Cournot Equilibrium: if players choose their level of output

- Dominant Strategy: strategy that is best regardless of what the other player does 9

Does Clyde have a dominant strategy?

• If Clyde confesses he gets 6 years in prison, if he doesn’t he gets 7 years. Clyde will  confess because 6 years is better than 7 years.

• If Clyde confesses even when bonnie doesn’t, he gets 4 years in prison. If he  doesn’t confess, he gets 5 years. Clyde will confess because 4 years is better than 5  years.

Does Bonnie have a dominant strategy?

• If Bonnie confesses, she gets 10 years instead of 11. Bonnie will confess because  10 years is better than 11 years.

• If Bonnie confesses, she gets 6 years instead of 8 years. Bonnie will confess  because 6 years is better than 8 years.

* Bonnie is better off if he confesses therefore the dominant strategy for her is to  confess.*

*Nash Equilibrium is at the upper left square because both will confess.*

*The lower right square is the idle choice, but they can’t get there because they can’t  collude.*

What is gender identity?

What is a mental set?