Course: The Biology of Nutrition and Health

Description: Here is my study guide for Professor Scully's Midterm in BISC 1005. The clicker questions and answers are highlighted in yellow.

 It took about 10 billion years for living things to come to  come into existence, so until that happened abiotic

 Hydrogen was the first stable atom that was formed

as the universe aged

 We came from a single common ancestor

 Components of this ancestor

 Fatty inside, water-loving outside

o Detecting and responding to environment

o Energy—all organisms need it, use it, and store

 Evolve as a living organism

 One organism lives inside of the other

o What is symbiosis? Don't forget about the age old question of 11) Why are action potentials usually conducted in one direction?

 When two or more different species live together and  interact; they have a very close association with each other  It is not always beneficial!

 Two species interact but what they are doing is

harmful to both of them

 We forced this in food production with the use of  pesticides, fertilizer, etc  stresses other species in  the area

 75% of antibiotics = used by farmers

 Niche: everything you need to live

 Combination of all abiotic and biotic needs of a

species or population to survive and reproduce

 During a competition, some part of the niche is

 One is harmed, one benefits

 Parasiteslive in and on the organisms

 They often cause harm

 The average American is prescribed 17

doses of antibiotics by the age of 20

 Survival and reproduction are both increased with  both species

 All organisms which live in symbiotic relationships  with humans

 Transitions of one type of species-species interaction  to another

o Example: switching from commensalism to

o This is based on population size and other

 Movement of food from one organism to another

o It is an organic substance, meaning it is a hydrocarbon o Inorganic source = CO2

o Organic products are produced from inorganic sources by  organisms

 Who makes food and who eats food?

o Autotrophs: produce their own food

 These are prokaryotes

 These are prokaryotes, protists, plants…. Or anything green or that has color and can make their own food

 These are prokaryotes

 Can’t make their own food

 Rely on autotrophs to make food for us in the form of  sugar, which we then use to make other substances

o Single celled organisms that have a simplistic structure and  function

 Live in many extreme environments

o When they are pathogens, they can harm us

 Can be intracellular

 Enter into our cells and survive

o They produce a substance that causes harm

o They kill the cell that causes it to burst

 Can be extracellular

 They multiply outside

o Cause an imbalance in our normal flora

 Can be toxins

o Something structural that is there for a

different purpose and unintentionally helps the

o Produce mainly as a defense

 How to prevent foodborne illness:

raw meat on same cutting board

o They are photosynthetic

 Mostly what we consume

 If it is green, it is a photoautotroph!

 Roots exist below the ground

and water to the photosynthetic cells

 Shoots exist above the ground

 What we eat:

o Fruit (this is really the ovaries of the plant)

 Production of flower attracts pollinators and then

 Most are hermaphroditic, meaning they have both

o Male parts include a stamen, which has a

filament that can project out of the flower and

o Female parts are collectively referred to as the

 Stigma: the top part that has a sticky

substance that the pollen can stick to

 The sperm travels down the style, into

the ovary, and then into the ovule, where

o From a flower that has one ovary, such as the

o From one flower with multiple ovaries, such as

o From many flowers, such as a pinapple

 CO2 is taken in through pores

 Pigments come from the chloroplasts

 Light energy is converted to electrical energy and

then to chemical energy

o Photons, packets of energy, are measured in

wavelengths and are part of the

o Any substance that can absorb light energy

o Color is determined by wavelength it reflects

o Light is converted into heat, light, or chemical

o The most important one is chlorophyll a

 ATP and NADPH are produced

 Electron from chlorophyll a is energized

 The first two pick up electrons and hydrogen atoms

that have been released and NADPH deliver energy

by providing electrons and hydrogen atoms

(enzyme) and it is fixated to RuBP

o Energize sugar to incorporate it into existing

 What type of relationship doesn’t exist within your microbiome? o Competitive

o Decompose and release nutrients that would otherwise not be  available

 Can be single celled, like yeast, or multicellular

 Fungi can live by either aerobic or anerobic cellular

 Why do leaves turn colors in the fall?

o Pigments are broken down which changes the light reflected  Animals

o Cells do not have a cell wall, which plant cells do have  Allows animals to have flexibility

o What do we consume?

o What element makes up most of your body weight?

o What molecules are most prevalent in the human body? Oxygen,  carbon, hydrogen, nitrogen

 Triglycerides (aka cellulite, what we think of as “fat”)

o Both cholesterol and fats are hydrophobic

 Fats that have the same structure with

different ingredients attached to them

 Trans fat is the worst fat found in food, because it  affects blood cholesterol and consistently increases  bad cholesterol

o You can stack them

o One or more atoms have a double bond, so  there is a kink preventing them from being able to lay flat

 Natural peanut butter with the oil on top  is due to the kinks, whereas

hydrogenation of peanut butter makes it

o Make up membranes of cells

 Can act as hormones

o If a product has less than 0.5g trans

fat/serving, it is allowed to be listed as “0”

o Look at ingredients to determine if there is  transfat

 It is an ion with a charge, usually found as an  additive

o How to build:

o How to break:

 Cellulose is the most common carbohydrate on earth  Food label: Listed as sugars and fibers

 Glucose and fructose are bonded

 On food label is listed as fiber

 Monomers are linked together in

o Glycogen is a storage molecule

o Chitin is produced in fungi and invertebrates  for structure

o The sequence of amino acids is their structure

o The folding determines their function

 Bring fats home to the liver while

LDL does its job

 Contain a lot of cholesterol,

phospholipids, and a lot of fat

 Saturated fats keep both of these high,

o Channel proteins: tunnels in cells that allow  specific substances in and out

o Carrier proteins: move to bring a substance in  or out of cell

o Speed up reactions, by way of enzymes

o Antibodies are produced to defend against  specific invaders

o Destruction of the 3D shape by heating them  up, changing the pH or making it very acidic,

 Nucleotides are the building blocks of hereditary  material

 Can get locked up in fat stores

 Can consume at high rates and is okay in

 Most common vitamin deficiency in US: B6

 The ones we need come in the form of ions

 Iodine is critical for metabolism

o From salt and seafood

 We don’t have to label GMOs

 A gene inserted into a plant makes it produce its own insecticide, and doesn’t really effect farmers as much

because they produce more crop

 Animals are consumers, so we eat other organisms in some way or another

 We break down the consumed organism

 Outside the cell we consume monosacharides,

o As we consume proteins we must degrade

 We absorb the vitamins and minerals

 Without them, reaction time would be way too slow—  enzymes lower the activation energy needed and therefore increase the speed of the reaction

 There is an active site within the enzyme

 A substrate binds to this site

o If you require a substrate, this means that an

 There is a big substrate that docks into a different type of  enzyme, which causes it to change shape through different processes

 Involves breaking down energy for current use

 Anabolic: building up something big,

 Metabolic pathways in the body involve several reactions  and there are several intermediates, each one of which has its own enzyme

 For example, farm-raised salmon has food coloring added  to it

 It naturally is not pink because it is not eating the

 Hydrolyzed food products are added to foods to make them tasty

 You need less, so it ends up being cheaper

 You can have an organic product that isn’t natural

and sewage sludge based fertilizers

 Adding heat to a system

o The vitamins can also degrade

 Which structure does not digest to absorb nutrients?

 Pepsin (enzyme in stomach) can chew it up, mucus

 You only get about 10% of nutrients here

o Chemical: enzymes lipases, carbohydrates, proteases  These all get sent to the small intestine

o Which of the following reasons explains why starch molecules  must be broken down before they can be absorbed by the small  intestine?

o All ingredients from pancreas as well as mucus

o Goes around food and pulls apart fats, allows lipases to “get in  there and chew them out”

o Digestion: not much

o Absorption: water, vitamins, minerals (due to mutualistic bacteria that live there)

 An organism who can create organic substances from carbon dioxide  by chemical energy is considered: 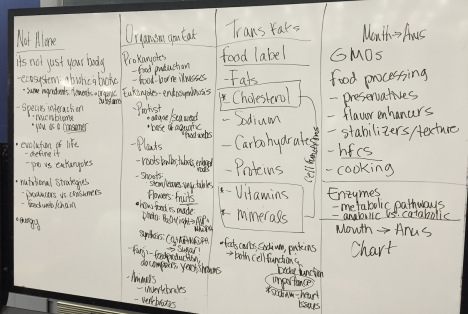 what is the typical trajectory of decomposition?