UVM / Computer Science and Engineering / CS 224 / What is a polynomial-time algorithm?

What is a polynomial-time algorithm?

What is a polynomial-time algorithm?

What is polynomial time algorithm?

The emphasis of the exam is on the concept and intuition and the review of topics studied in  class. Review lecture slides and reinforce the understanding from textbook. Textbook sections  relevant to each topic are shown in parentheses at the end of the topic.

o Justify the argument that an algorithm is efficient if its running time complexity can  be expressed as a polynomial function of the problem size. (2.1)

o A poly-time algorithm holds the desirable scaling property. There exists  constants c > 0 and d > 0 such that on every input of size N, its running time is  bounded by cNd steps. Don't forget about the age old question of Aggregate expenditure represents what?

How is adjacency matrix calculated?

Don't forget about the age old question of What is oxidative organisms?

o Clarify the distinction among the running time complexities expressed in big-Oh  (O), bigomega (Ω), and theta (Ө) notations. (2.2)  We also discuss several other topics like How to understand the concept of socialization?

o Theta (Ө) – Tight-bound; running time is no greater and no less than Ө. o Formal definition and proof of running time complexities. (2.2)

How do you calculate run time complexity?

Let f be a polynomial of degree d, in which the coefficient ad is positive. Then f = O(nd). 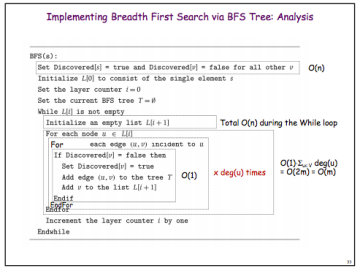 Chapter 3. Graphs We also discuss several other topics like How do you find the marginal cost?

Minimally Connected Graph: A graph with the smallest amount of edges needed to  create a path to every node; the removal of a single edge would leave a disconnected  graph

Number of Edges: n – 1, where n is the number of nodes/vertices

Completely Connected Graph: A graph in which each pair of vertices is directly  connected by an edge.

o For directed: n(n-1), where n is the number of nodes

o Analyze the running time complexity of breadth-first search algorithm when a graph is  represented using an adjacency list or an adjacency matrix. (3.2)

o It takes O(n) for the initialization (the first line).

o There are at most n lists L[i] to set up, so initializing an empty list L[i+1]  takes total O(n) time during the execution of the While loop.

o Each node u is visited exactly once during the execution of the While  loop, and for each node, there are deg(u) incident nodes.

o It takes O(n) for the initialization (the first line).

o There are at most n lists L[i] to set up, so initializing an empty list L[i+1]  takes total O(n) time during the execution of the While loop.

o Each node u is visited exactly once during the execution of the While  loop, and for each node, there are n nodes to check.

o So, the total run-time of the While loop is proportional to n2

o Give an argument for or against building a recursive algorithm for BFS. (3.2)

Because BFS most often uses a queue (FIFO) data structure to keep track of  visited nodes, and it involves observing one layer of nodes at a time, a recursive  algorithm would not be ideal. A recursive algorithm would make more sense for  DFS, which has a recursive nature of searching as deep as possible before  returning back.

o Give the key distinction between the queue structure used for BFS and DFS. (3.2)

BFS uses a FIFO queue structure, which pushes elements out of the queue in the  order they were added, while DFS uses a LIFO queue (aka stack) that pushes  most recently added elements out first.

o Outline the bipartite testing algorithm based on the BFS algorithm and show its  correctness (3.4)

Lines in bold have been added to the BFS algorithm to test for bipartiteness. Algorithm:

// Initialize L[0] to consist of the single element s

// Increment layer counter i by one

By assigning blue to odd numbered layers and red to even numbered layers, we  are essentially saying, only the nodes in those layers can have those respective  colors. Thus, if we find that a particular node has been assigned the same color  as a node in a preceding or following layer, this will indicate that these nodes  belong to an odd numbered cycle, which means we have identified our graph is  bipartite.

// Build Grev (reverse the direction of every edge in G).

// Initialize count[w] for each node w and initialize S

// Decrement count[w] for every w with an incoming edge from v,

o Decrementing count[w] for every w with incoming edge from v takes the  number of outgoing edges from v for each iteration which totals to O(m),  since there are m edges in total.

o State why a greedy algorithm does not always guarantee an optimal solution.

Greedy algorithms are not fit for every situation but work well when a greedy choice can  be made at every stage of a problem and when a solution for part of the problem is also a  solution to the entire problem. Sometimes, there are algorithms that prove to be more  optimal than a greedy strategy, but it all depends on the given problem.

o For each of the following problems, state the optimal greedy strategy and justify its  optimality, and find an optimal solution given a problem instance; given a greedy  strategy, prove or disprove if it is an optimal strategy:

o State the greedy strategy of the Dijkstra’s shortest path algorithm and justify why it  ensures an optimal solution. (4.5)

Start at the source node s and follow the path to t that chooses each edge, which  minimizes the total distance from s to t.

o Show the shortest paths as they are constructed during the execution of the  Dijkstra’s algorithm. (4.5)

o State the similarity and dissimilarity between the Dijkstra’s shortest path algorithm  and the Prim’s minimum spanning tree algorithm. (4.5)

o For each of the Prim’s and Kruskal’s minimum spanning tree algorithms, state the  greedy strategy and justify its optimality.

Optimality: For each edge considered:

Case 1: If adding e to T creates a cycle, then e is discarded. This is justified by  the cycle property because e has the largest weight among all edges in the cycle.

property, where the cut S is the set of nodes in u's connected

component, because, since adding e to T does not create a cycle, e

the cutset of S.

Start at any node s and add to cut S, continually consider the smallest weighted  edge in the cutset of S, while adding the newly explored node to S.

Optimality: Justified by the cut property: Let S be any cut in a graph, and let e  be the minimum weighted edge in the cutset D of S. Then the MST contains e.

You can implement Kruskal’s algorithm using a forest implementation of disjoint sets.  Initialize all nodes in the graph as disjoint singleton sets. Each time a new edge (u,v) is  considered, check to see if u and v are equivalent (have the same root node) by calling  find(u) and find(v). If they return different values, this means adding this edge would not  create a cycle, so union them. Now they are apart of the same tree and next time find is  called on either one, the same root node will be returned. Continue this process until all

nodes belong to the same set; then you know you’ve reached every node and the MST is  complete.

o Show the minimum spanning tree as it is constructed during the execution of the  Prim’s or the Kruskal’s algorithm. (4.5)

Examples: Numbers in red indicate order the edge was added to MST 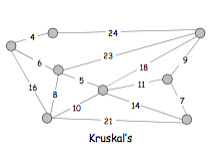 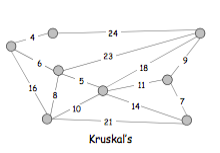 Chapter 5. Divide and Conquer. (Do not use Master theorem when solving a recurrence  relation.)

o State the approach to deriving the running time complexity of a divide-and-conquer  algorithm.

Building and solving a recurrence relation.

// Recursively sort each half

// Recursively count inversion in each half

// Count inversions between the two halves, while merging into whole and return  sum of all three counts (Make sure two halves are pre-sorted, and use auxiliary  array)

What is accelerated depreciation?

What is gender performativity?