GWU / Economics / ECON 1012 / We say that the economy as a whole is in macroeconomic equilibrium if?

Description: Notes on chapter 12 for test 3.

a. The amount of spending that occurs in an economy

3. We say that the economy as a whole is in macroeconomic equilibrium  if

4. If inventory is rising due to the overproduction of crops, then it does  not signal bad times

a. Inventory is not increasing because of a fall in demand  5. Determinant of investment  Don't forget about the age old question of What is oxidation-fermentation (o-f) test?

a. Spending on goods and services by all federal, state and local  governments

a. The total amount of additional increases in consumption  spending induced by an initial change in aggregate expenditure

o Assumption of the model  price level is constant

o Early 1930s  US, UK and other industrial countries suffered  declines in real GDP of 20 percent or more

o Four components of aggregate expenditure that together equal  GDP

 Consumption  Spending by households on goods and  services, such as automobiles and haircuts

 Planned investment  planned spending by firms on capital goods, such as factories, office buildings, and machine  If you want to learn more check out How to distinguish sex from gender?

tools and on research and development, and spending by  household and firms on new houses

 Government purchases  spending by local, state and  federal governments on goods and services, such as

aircraft carriers, bridges, and the salaries of FBI agents

∙ Planned Investment vs. Actual Investment  If you want to learn more check out What is groupthink?

∙ Along with spending on machinery, equipment, office building, and factories

 Equal to the amount they actually spend

 Amount businesses plan to spend on inventories may be  different

o Actual investment spending will be

o Actual investment will equal planned investment only  when there is no unplanned change in inventories  ∙ Macroeconomic Equilibrium  If you want to learn more check out What marketing strategy is undifferentiated target strategy?

o Why GDP fluctuates in the short run

 Inventories will decrease  If you want to learn more check out What is the slope of the total product curve?

 Many businesses will sell fewer goods and services than  expected

 Firms sell what they expected

 Not have an incentive to increase or decrease production   Macroeconomic equilibrium

 Only in period of recession does the growth in consumption decline If you want to learn more check out What is sales revenue?

o Income remaining to households after they

have paid the personal income tax and

consumption of US households

o Permanent increases in wealth have a larger

 Only when current income is not

o Measures the average prices of goods and

services in the economy

o As price level rises, the real value of wealth

 So will consumption

o When interest rate is high, the reward for

 Households are likely to save more and

 States interest rate on a loan or a

 Corrects the nominal interest rate for the

effect of inflation and is equal to the

nominal interest rate minus the inflation

o Most likely to be affected by changes in the

o Slope of the consumption function

 Relationship between consumption spending and

o A part of every increase in income is consumed, and with taxes  constant, what is left over is saved

∙ Firms build more when they are optimistic about

spending and a lower real interest rate results in more

o Include purchases at all levels  federal, state and local  o Does not include transfer payments, only purchases for which  the government receives some good or service 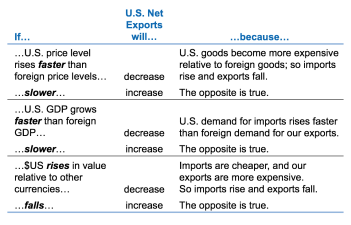  When they receive additional income, households consume some of it and save some of it

 Resulting consumption function tells us how much

 If there is no other expenditure, the equilibrium is wherever the consumption function crosses the 45 degree line

 Macroeconomic equilibrium is the point at which

∙ The level of consumption is consistent with the level  of income, according to the consumption function

 We call this top most line the aggregate expenditure  function

 If equilibrium happens at the level of potential GDP

∙ Unemployment will be low

∙ It will be at the natural rate of unemployment or the

 They will do this instead of increasing production to normal levels

 Real GDP increases by more than the change in

∙ This is the multiplier effect

∙ Eventual Effect of the Multiplier

∙ The Multiplier and the Marginal Propensity to Consume  o In each “round”, the additional income prompts households to  consume some fraction

 The marginal propensity to consume

∙ Formula for the Multiplier

o Because multiplier is greater than 1, the economy is sensitive to  changes in autonomous expenditure

o Larger the MPC, larger the value of the multiplier

 The value we estimate for the multiplier, from the MPC, is  too high

∙ The Paradox of Thrift

 If saving does not equal investment, there is a discrepancy  between spending and production that will result in

 Since firms are not in favor of seeing inventory levels  change, production will change

 At the equilibrium level of GDP, inventories do not change  and spending equals production

o Savings were the key to long term growth

 An increase in saving is good, because saving is borrowed  and spend on investment goods

 Savings will be borrowed and spent for investment

 If an increase in saving doesn’t lead to more investment,  we have the Paradox of Thrift

∙ The attempt to save more may reduce GDP and

o As demand for a product rises  production will increase, so will  the product’s price

 Increases in the price level will cause aggregate

expenditure to fall and decreases in the price level will

cause aggregate expenditures to rise

o If price levels rise in the US faster than in other countries, US  exports fall and imports rise, causing net exports to fall  o When prices rise, firms and households need more money to  finance buying and selling

 If the supply of money doesn’t change, the interest rate  must rise

 This will cause investment spending to fall

o These effects work in reverse if the price level falls

∙ When aggregate expenditure is more than GDP

o Explains short run fluctuations in real GDP and the price level  o Aggregate demand curve  relationship between the price level and  the quantity of real GDP demanded by households, firms and the  government

 Current income is the most important variable determining  consumption by households

∙ So will consumption

∙ Reduces the demand for goods and services

∙ So will consumption and the demand for goods and  services

 When price level rises, households and firms will try to  increase the amount of money they hold

∙ Withdrawing funds from banks, borrowing from banks or selling financial assets such as bonds

∙ In turn, it also reduces the quantity of goods and  services demanded

∙ Increases the quantity of goods and services

What does an informal care mean?