PURDUE / Anthropology / ANTH 10000 / What is the difference between kinship and descent?

Course: Being Human: Introduction to Anthropology

Description: Kinship and the Reckoning of Descent, all three lectures included

Kinship and the Reckoning of Descent

In many foraging and industrial societies, the nuclear family is 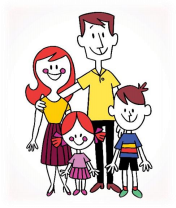 within the nuclear family (parents to children)

- Collateral kin are recognized, but have little importance

for inheritances or other domestic activities

- Here, strong distinction is made between lineal and

collateral kin as indicated by separate kinship terms If you want to learn more check out What is the meaning of buffer paring?

distinct from terms for collaterals (e.g. aunt/uncle and cousin

Nuclear systems and “bilateral descent reckoning” and the

What is the child of a brother and sister called?

A kindred is not a cohesive cooperative group

- Each person has a unique network of consanguineal and affinal kin

Mid-range societies Don't forget about the age old question of How was domestic violence viewed in the past?

(Not foragers or modern industrialized)

∙ Family mobility is not as important

∙ Control of localized resources my require corporate groups (i.e property-holding groups) when  property rights are not protected by law, and it is not possible to create a business, charitab;e  organization, etc., through a legal process We also discuss several other topics like How does the electromagnetic spectrum work?

o (in bilateral descent and the kindred, descent is traced through both males and females)

- A person is a member of a group that traces descent through females (a “matrilineage”) - This fact shapes many aspects of one’s life including residence, shared ownership and work, and  inheritances (the matrilineage is a corporate group i.e. property owning group)

- A “patrilineage” (a corporate group) would include

o (mother is not a member of ego’s patrilineage – she is a member of her father’s  patrilineage) Don't forget about the age old question of What is the meaning of accountable? 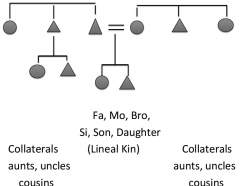 - (and of these, tracing descent through males is three  times more common than though females) If you want to learn more check out How do you write the second derivative? 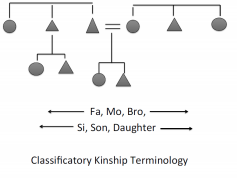 - Ego’s most significant social ties are to all

persons descended from a common ancestor

traces either through males or females

- Classificatory: lineal terms are used for collaterals who are member of the same descent group - Typically: Fa’s Bro is called by the same term as Fa

- Fa’s Bro’s children are addressed as Bro and Si

- In matrilineal descent, Mo’s Bro’s children are members of his wife’s matrilineage (this “cross  cousins”)

- in societies with matrilineal descent, a boy’s major “father figure” (i.e. the man who is most  concerned to teach a boy and discipline him, etc.) is mother’s brother

- a boy’s relationship with his father is affectionate, but father does not belong to the boy’s  descent group

- women’s status is lower in patrilineal societies (but relatively higher in matrilineal cases) - a married couple’s estate is not theirs – it is owned by husband’s or wife’s descent group - In patrilineal descent, If husband predeceases wife, the family’s wealth goes to his brothers,  leaving wife with no property

Advantages or Disadvantages in Shared Property Ownership by Kin Groups?

- According to economic theory the descent group is a barrier to economic development (with  shared property rights, there is less motivation to invest or innovate)

- It is true that shared ownership can lead to disputes over business decisions - Example: small South Asian businesses in the U.S. (mostly hotels)

o Credit can be obtained from kin and with no collateral

o Repayments is as convenient, depending on success (with bank lean, any missed  payments will lead to default and loss of the business)

Ethic Groups and Their Subdivisions Based on Unilineal Descent

- Clans will belong to one or the other moiety (moiety isn’t always found, but is common) Unilineal Descent and Person’s Identity

- A person’s identity is layered or “nested”:

- A descent group is able to provide services through the tribal leadership when there is no state  or when a weak state is unable to provide adequate guarantees of individual security, property rights, or adjudicative services

- Social differentiation is ascripted, not based on achievement (a privileged “clan aristocracy”), so  governance may be indifferent or inefficient and not accountable to the clan members - Ethnic identity may be counter to the principles of democratic society

The Interesting Case of the Moiety

- Often a moiety serves to allocate positions of authority equally between two groups (for  example, alternating key positions between the two segments)

- The “friendly competition” between segments may be a motivating force

When is the second industrial revolution?

How much money can i donate to a presidential candidate?