Description: This is the study guide for Exam 3 on November 3. Hope this is helpful!

o Age structure fluctuations- high numbers in any one age group  usually corresponds with high birth or death rates in that year o Overshoot- population exceeds carrying capacity (k), usually due  to a reduction in k because of decrease in resources

It lives on the outside of organisms and feeds on bodily fluids by puncturing the skin, what is it?

If you want to learn more check out What are the four lobes of the brain?

o Stochastic model- accounts for variation in population growth  rates We also discuss several other topics like It is a type of memory that holds information for a brief period of time, what is it?

 Demographic stochasticity- due to random variations  among individuals Don't forget about the age old question of What are the sex-linked disorders?

o Habitat fragmentation- breaking up a habitat into smaller  habitats

 Each occupied patch has the same subpopulation size

 Each subpopulation supplies the same number of

dispersers to other patches

∙ Both can have dramatic effects on species abundance

 Parasitoids- predators whose larvae eat prey from the  inside out

 Top predators- bigger carnivores that are at the top of the  food chain Don't forget about the age old question of Why did brits get concerned about the health of women in india in the 1860s and 1870s?

∙ cNP = loss of individuals due to predation

 Predator population is stable when dP/dt = 0 We also discuss several other topics like Why technological process is a source of sustained growth in gdp?

o Functional responses- relationship between prey density and  predator consumption Don't forget about the age old question of How does a nations economy grow?

 Type I- predator rate of consumption increases until

∙ Most common in the wild 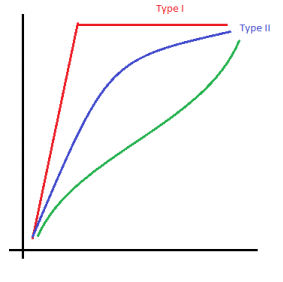 o Structural defenses- anything that reduces a predator’s ability to  capture, attack, or handle prey

o Costs- can reduce growth, reproduction, and development  Behavioral defenses have many trade-offs with food

 Difficult to move between hosts

 Horizontal transmission- passed between organisms that  are not parent/offspring

o Ability of parasite to jump between hosts

∙ Parasite/host dynamics- similar to predator/prey dynamics, except  parasites do not usually kill the host

o S-I-R Model- assumes no new births of susceptible individuals  and that once resistance is gained, it is retained

 S = number of individuals susceptible to a pathogen

 I = number of individuals infected

 b = rate of recovery and development of immunity ∙ B for b-cells of immune system!!

 Probability of contact between susceptible and infected  individuals = S(I)

 Rate of infection between susceptible and infected  individuals = S(I)(g)

 Nonrenewable- are not regenerated

 If 2 species compete for the same limiting resource, the  species that can drive abundance of the other species to

the lowest level will survive

 Assumes that each resource has an independent effect on  population

o Competition based on single resource

 Allelopathy- use of chemicals to harm competitors

What are the three steps in translation-elongation?

What is the parameter needed for systematic sample?