What stage in mitosis that replicated chromosomes become thicker and s

What stage in mitosis that replicated chromosomes become thicker and s

Description: Here is my study guide for exam 3. Best of luck studying!

What stage in mitosis that replicated chromosomes become thicker and shorten; centrosomes begin to move outwards?

Here is the study guide I have prepared for exam 3 in BSC 197. It consists of three main parts:  Cell Cycle, Cell Processes, and Genetics. Best of luck on exam 3!

Like with exam 2, I will release another study guide consisting of the material discussed at  the review session.

What is the sex chromosome of male and female?

Don't forget about the age old question of What are the four types of sensory axons?

• Metacentric: centrosome is near center of chromosome

• Telocentric: centrosome is at telomere of chromosome

• Telomere: end of a chromosome

• Centrosome: the small pinched region of a chromosome (typically shown  metacentric in diagrams, however, that is not always the case)

• Somatic cells: most common, non-reproductive, 2 sets of chromosomes • Gametes: typically referred to as sex cells, half as many chromosomes as somatic  cells, produced by meiosis, EX: sperm, eggs

Who provided evidence which showed that genes were located on the chromosome?

• The majority of the cell cycle is completed in Interphase

• G1 phase: acts as a rest break for the cell

• G2 phase: acts as a rest break for the cell

• 2) Prometaphase: spindles extend from centrosomes, chromosomes continue to  thicken, spindles bind to the kinetochore of the centromere

• 3) Metaphase: chromosomes line up along midline of the cell If you want to learn more check out What is the first neurotransmitter identified?

• 5) Telophase: chromosomes are pulled to opposite sides of the cell

• During cytokinesis in plant cells, a cell plate would form  Don't forget about the age old question of What is the collection of elements or objects that possess the information the researcher seeks and about which the researcher will make inferences?

Cancer and the Cell Cycle

Cancer results from a mutation in the cells. If the mutation is not caught by the nucleus,  the cell will continue to produce mutated cells eventually leading to the formation of cancer. Meiosis If you want to learn more check out What are the claimed effects of stigma?

• Heredity: the passing down of traits from generation to generation

• Variation: the differences between offspring and their biological parents • Genes: small units of heredity, constructed of DNA

• Locus: a gene’s specific location on a chromosome

• Autosomes: chromosomes that do not determine gender (22 in total)

• Diploid cell: a cell with two sets of chromosomes

• Haploid cell: a cell with one set of chromosomes

• Fertilization: a sperm and an egg cell joining together

• Random Fertilization: there are trillions of possible combinations for a sperm and egg Meiosis Process (follows the replication of chromosomes in Interphase)

• tetrads line up along metaphase plate

• one chromosome moves toward each pole

Telophase I and Cytokinesis

• mutations are the original source for genetic variation

Mendel studied seven characteristics of pea plants: flower color, flower position, seed color,  seed shape, pod shape, pod color, stem length. Mendel discovered dominant and recessive  traits. If the dominant trait is present in an organism, that is what we see. For the recessive  trait to be seen, the genotype must be both recessive.

• Phenotype: the appearance of an organism caused by its genotype; EX: if red color is the  dominant trait, the flower looks red; red color/dominant is the phenotype • Genotype: the genetic makeup causing the phenotype

• A gene has alternative versions which can cause variations in traits. We know call the  gene alternatives alleles.

• For every trait, an organism inherits an allele from each parent. An organism could get  two different alleles or two identical alleles.

Mendel’s exact ratios have not yet to be reproduced. Mendel achieved very clearcut ratios  however no scientist has been able to reproduce the results. Mendel’s ratios are similar to the  results of pencil-and-paper punnet squares:

This Punnet square is a heterozygous parent 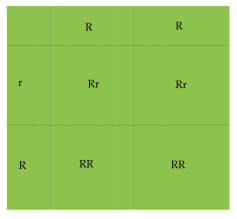 crossed with a homozygous parent. All the

offspring will express the dominant trait.

Morgan came after Mendel and experimented with fruit flies. He provided evidence which  showed that genes were located on the chromosome.

• A gene of a sex chromosome is called a sex-linked trait even if it is unrelated to sex • In females, the embryo will inactivate one of the two X chromosomes randomly. The  inactive X chromosome becomes a Barr body.

• Mosaicism: If a female is heterozygous for a certain trait, she will become a mosaic for  that trait after X chromosome inactivation.

A linked gene refers to genes on the same chromosome that are commonly inherited together.  Morgan reasoned that these genes do not sort independently because they are on the same  chromosome.

Polyploidy: too many chromosomes

• Semi-conservative replication: the existing DNA strands are separated and a new strand is  created. The new double-stranded DNA molecule consists of one old and one new strand.

1. The double stranded DNA molecule is separated by an enzyme known as helicase.  The unwinding begins at the origin of replication. The strands want to reconnect, or  reanneal, so single stranded proteins bind to the bases to prevent that.

3. DNA-RNA duplex is constructed by primase and attaches the complimentary base pairs  to the strand

4. DNA ligase connects the two strands and then polymerase proofreads the new strand.

• Mismatch: an incorrect base pair is corrected by enzymes

• use of mRNA template to synthesize new proteins (translation)

• Termination: polymerase stops synthesizing RNA and the RNA folds on itself

• Termination: protein synthesis stops and the ribosome detaches from mRNA

Both of these are complicated processes. Above is a basic explanation of each stage. If you  would like a more in-depth explantation, check out the following link: http:// www.genome.gov/27552603

An operator is the regulatory switch which is a segment of DNA. The operator and promotor  are usually within close proximity. The operon is a stretch of DNA that contains the promotor,  the operator, and the genes controlled by the promotor and operator.

The repressor is responsible for switching the operon off. It can also prevent gene  transcription. To do so, it will bind to the operator which blocks RNA polymerase. The  corepressor helps the repressor to switch off the operon.

Once translation occurs protein processing can occur. This could include degradation by the  proteasome or the addition of chemical groups.

Prokaryotes, such as bacteria, keep the replication process as quick as possible. They have  evolved to delete genes not needed in their genome (this process is called genome reduction).  Eukaryotes, unlike prokaryotes, will add to their DNA over time.

1. Some cells have the ability to take DNA from their outside environment and integrate  it into their own DNA cells. Some bacterial cells can do this.

Horizontal Transfer: DNA material taken from an outside source. The above numbered  points show the three main methods of horizontal transfer.

Transposable elements are pieces of DNA that will replicate and move, or transpose, to other  ares of the cell.

Assumptions to use the equations:

1. No new organisms can enter the environment 2. System must be at equilibrium

3. No new conditions causing different selective pressures than before

What principles have been most influential in media law concerning the internet?

How does an experimental design accomplish its purpose?