What is Stream Discharge?

Chapter 14: Streams and Floods: The Geology of Running Water

A. Occurs when a fluid flows in parallel  layers, with no disruption between layers

C. A trough dug into the ground surface by  flowing water

F. Occurs when a fluid flows in parallel  layers, with no disruption between layers

G. A ribbon of water that flows in a channel

H. Refers to the maximum particle size a  stream can carry

I. The process by which a stream channel  lengthens up its slope as the flow of water  increases

J. Small solid particles (silt or clay size) that  swirl along in the water without settling to  the floor of the channel

N. Running water containing sand to gravel  size particles acts like sandpaper and grinds  away at the channel floor or walls Don't forget about the age old question of acg 2021 uf

O. An event during which the volume of  water in a stream becomes so great that it  covers areas outside the stream’s normal  channel

P. Running water dissolves soluble minerals  as it passes and carries the minerals away in  solution

Q. Refers to the total quantity of sediment it  can carry (depends on competence and  discharge)

• Gravity pulls surface water downhill into a stream channel, which is a trough in the  surrounding substrate

• An array of interconnecting stream that together drain an area

o Dendritic We also discuss several other topics like soc1001n

• Do not flow all year

• Bed/floor of channel is above

• Efficiency of erosion is a function of velocity, volume, and sediment content of water o Small volume, slow-moving, clear water

▪ Not efficient at erosion

• Geologists refer to the total volume of sediment carried by a stream as its sediment load.

• Fluvial deposits (alluvium) – sediment deposited in a stream channel, along a stream  bank, or on a floodplain

• Point bar – a wedge-shaped deposit of sediment on the inside bank of a meander • Delta – a wedge of sediment formed at a river mouth when the running water of the  stream enters standing water, the current slows, the stream loses competence, and  sediment settles out

• The slope of a stream’s channel in the downstream direction

o A lake represents a local base level

In general, a stream cuts down into the ground in the headwaters and cuts from side to side near  the mouth

Meander: a snake-like curve along a stream’s course

A. Low area between waves

B. The bending of the waves as they  approach the shore at an angle

C. As the lithosphere moves away from the  mid-ocean ridge spreading centers it cools  down and sinks, creating a flat section of  ocean floor

D. The elevation difference between sea  level at high tide and low tide

G. Hot-spot volcanoes (non-plate boundary  related) that do not rise above sea level

H. Top of the wave

What does crust have to do with oceans?

L. The rising and sinking of water driven by  contrasts in water density which is due in  turn to differences in temperature and  salinity; this circulation involves both  surface and deep water currents in the ocean

M. The deflection of objects, winds, and  currents on the surface of the Earth owing to  the planets rotation 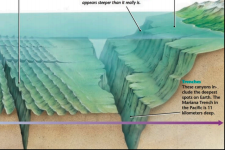 • Salinity – the degree of

concentration of salt in water

• Ocean water salinity variation is a

▪ Tropics are generally warmer due to more solar radiation

▪ Surface Currents are caused by interaction between wind and the surface  of water. Only affects the upper few hundred meters of water 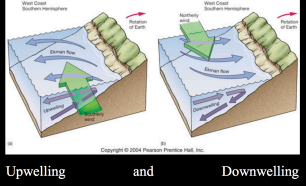 away from coast (southern wind)

toward the coast (northern wind)

• Cause: shear of wind blowing over

• Beach- an accumulation of sediment found along

• Submerged or partly exposed ridge of sand or

coarse sediment that is built by waves offshore

• Breaking waves dig into the sand near the 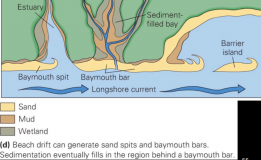 • The excavated sand is deposited either on the

that is a result of high rate of sediment

deposition due to wave and tide activity

• An inlet in which seawater and river water mix, created when a coastal valley is flooded  because of either rising sea level or land subsidence (sinking)

o Formed at the end of the last ice age between 10,000-18,000 years ago. As  glaciers receded and melted, sea levels rose and submerged low-lying river  valleys

A. Seep down into

B. The region below the water table where  pore space is filled with water

C. A mound of groundwater becomes  trapped above a localized aquitard that lies  above the regional water table

D. Sediment or rock that does not transmit  water easily and therefore retards (slows  down/stops) the motion of water (typically  has both low porosity and permeability)

E. An aquifers that is separated from the  Earth’s surface by an overlying aquitard

F. A location where water enters the ground  and infiltrates down to the water table

G. Water that resides under the surface of  the Earth, mostly in pores and cracks of rock  or sediment

H. A spring that emits water ranging in  temperature from 30-140 degrees C

I. An aquifer that intersects the surface of  the earth

J. The region of the subsurface above the  water table, pore space may contain some  water and some air

K. Sediment or rock that transmits water  easily (has high porosity and permeability)

L. The potential energy available to drive  the flow of a given volume of groundwater  at a location; can be measured as an  elevation above a reference

N. A verdant (green with grass, etc.) region  surrounded by desert, occurring at a place  where natural springs provide water to the  surface

O. A location where groundwater flows  back up to the surface, and may emerge at  springs

• A region by underlain by caves in limestone bedrock; the collapse of the cave creates a  landscape of sinkholes separated by higher topography; or of limestone spires separated  by low areas

• Porosity – the total volume of empty space (pore space) in a material, usually expressed  as a percentage, pores can become filled with water

Perched Aquifer: a mound of groundwater becomes trapped above a localized aquitard that lies  above the regional water table 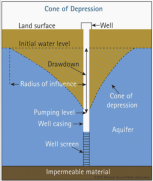 can flow sideways and even upward

and the permeability of the material through which the

• Moves at a snail’s pace

• A well in which water rises on its own

• Potentiometric surface – the elevation to

which water in an artesian system would rise

if unimpeded; where there are flowing artesian wells, the potentiometric surface lies

• A natural outlet from which groundwater flows onto the ground surface

• Where flowing groundwater collides with a steep, impermeable barrier, and pressure  pushes it up to the ground along the barrier

• Where a perched water table intersects the surface of a hill

• Where downward-percolating water runs into a relatively impermeable layer and

migrates along the top surface of the layer to a hillslope

o As a result, the land surface sinks, leading to the formation of ground fissures and  causing houses to crack

A. (Breaking off of chunks of ice) B. Sediment deposited at sea by melting

C. A strip of till along the side margins of a  glacier

D. Cobble to boulder size clasts of rock  found within till or random places where the  glacier was once flowing

G. A strip of till in the interior of a glacier,  parallel to the flow direction of the glacier,  formed by the lateral moraines of two  merging glaciers

H. Unsorted sediment carried by ice,  deposited beneath, at the side, or at the toe  of a glacier

I. A river or sheet of ice that slowly flows  across the land surface and lasts all year  long (movement caused by gravity)

J. A sediment pile composed of till (glacial  sediment) deposited by a glacier

K. Till from the glacier toe that is  transported (and sorted) by braided streams

L. A pair of thin layers of glacial lake-bed  sediment, one consisting of silt brought in  during the spring floods and the other of  clay deposited during the winter when the  lake’s surface freezes over and the water is  still

N. The process by which the surface of a  continent rises back up after an overlying  continental ice sheet melts away and the

O. A streamlined, elongated hill formed  when a glacier overrides glacial till

P. Silt and clay size sediment transported  away from glacier’s toe and deposited some  distance away from the glacier

Q. The sinking of the surface of a continent  caused by the weight of an overlying glacial  ice sheet

18. __N___ Glacial Rebound R. A circular depression in the ground made  when a block of ice calves off the toe of a

glacier, becomes buried by till, and later

kilometers away from the outcrop from which it was detached

• Layers of snowfall are very much like layers of loose sediment

• With time and pressure (from snow above), snowflakes recrystallize into solid ice

1) Mountain (alpine) – shape controlled by topography of mountains – flow from

How exactly do glaciers move?

Glaciers are similar to bank accounts: 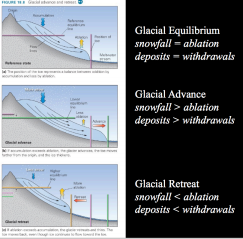 o Sublimation (evaporation of ice into

o Calving (breaking off of chunks of ice)

• Ice is grounded in shallow water, but floats in

• Ice formed by the freezing of the surface of the sea 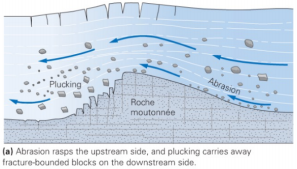 • Plucking is chunks of bedrock being

plucked out by the moving ice

• Abrasion is chunks of rock that has

already been plucked up into the

glacier that move against the bedrock

as the glacier moves and cause

that spread over northeastern Canada

during the Pleistocene ice age(s)

Interglacial – a period of time between two glaciations

Holocene – a period of geologic time since the last ice glaciation

What is developmental psychology?