UCR / Chemistry / CHEM 1 / What type of ions are emitted from acidic solutions?

Description: These are all the notes for the first midterm.

Solutions and Their Concentrations:

­Solvent: substance present in the greatest proportion in a solution

­Solutes: all the substances dissolved in it

­Aqueous solutions: solutions where water is the solvent

­Standard Solutions: solution of known concentration that is used in chemical analysis ­Dilution: process of lowering the concentration of a solution by adding more solvent ­To calculate volume of the more concentrated solution to be transferred: n=(Vi)(Mi) ­i is initial (concentrated) solutions

Which of the following is a brønsted lowry acid but not an arrhenius acid?

­To calculate volume of the solute transferred: n=(Vf)(Mf)

­f is the final (dilute) solution

­equation to calculate volume of a concentrated solution to be transferred to prepare a dilute solution: Vi=[(Vf)(Mf)]/Mi

­Why does the light bulb light up in a NaCl solution but not in a beaker of salt crystals? ­must be linked to the salt’s dissolution in water

­When NaCl dissolves, its ions are liberated from their crystal lattice and are able to migrate independently through the solvent. As they migrate, they take their electric charges with them. If they migrate in opposite directions then the ion migration allows electricity to flow through the solution We also discuss several other topics like What is the sears roebuck catalog?

­Electrode: a solid electrical conductor that is used to make contact with a solution or other nonmetallic component of an electrical circuit

­Electrolyte: material that conducts electricity because it has free ions, ionic solution and molten salts are examples

­Nonelectrolyte when substance does not dissociate into ions when it dissolves in water, does not conduct electricity (polar molecules, insoluble salts)

­Hydronium ions: formed when an H+ ion is donated to a water molecule to form H3O+

­weak electrolytes and weak acids We also discuss several other topics like How presidential campaigns are publicly funded?
If you want to learn more check out What major event happened in 1848 in seneca falls ny?

­Strong Base: base that completely dissociates into ions in aqueous solutions ­OH­ (combines with H+ to form water)

­Weak Base: base that only partially dissociates in aqueous solutions

­Neutralization Reactions: a reaction that takes place when an acid reacts with a base and produces a solution of a salt in water.

­spectator ion: ion that is unchanged by a chemical reaction

­How to Write a Total Ionic Equation:

1. Write all soluble ionic compounds as separate ions, with each of their symbols followed by (aq)

3. Use the molecular formula H2O(l) for water when it is a reactant or product (as a neutralization reaction)

­Once simplifying the total ionic equation by canceling out the spectator ions, it leaves us with the net ionic equation (chemical equation of a reaction that contains only the species that are changed by the reaction) Don't forget about the age old question of What are the ecological causes of evolution? 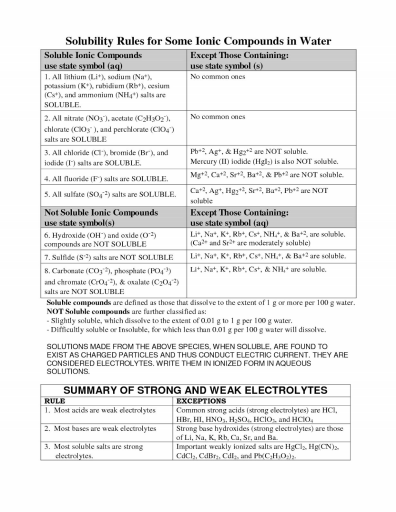 ­Precipitate: solid product formed from a reaction in solutionIf you want to learn more check out What is the culture in the 1900s?

­How to determine if 2 solutions form a compound that has limited solubility: 1. Identify the ions that are dissolved in the 2 solutions after the 2 ionic compounds dissolve and separate into their component ions

2. Determine whether either of the new anion/cation combinations produces a product of limited solubility (use solubility rule)

­Aqueous solubilities of ionic and molecular solids increase with increasing temperature ­Saturated solution: solution that contains the maximum concentration of a solute possible at a given temperature

­Oxidation: occurs when an atom or ion loses electrons

­Reduction: occurs when an atom or ion gains electrons

*One cannot occur without the other*

­Oxidation number: positive or negative number based on the number of electrons that an atom gains or loses when it forms an ion, or that it shares when it forms a covalent bond with an atom of another element

­0 for atoms in pure elements

­equals the charge of monatomic ions

2. Assign oxidation numbers for each element

4. On the opposite side of the equation add H2O to balance

­Titration: method to determine the concentration of a solute in a sample by reacting the solute with a solution of known concentration

­Titrant: standard solution added to the sample in a titration

­analyte: substance whose concentration is to be determined in a chemical analysis ­equivalence point: point in the titration when just enough titrant has been added to react with all of the analyte in the sample

­Energy: capacity to do work or transfer heat

­Work: energy used to move an object against a force

­Heat: energy used to increase the temperature of an object

­Internal energy: sum of all kinetic and potential energies of all of the components of a system

­Potential Energy: stored energy by virtue of position due to attractions and repulsions between objects

Energy as a Reactant or Product:

­First law of Thermodynamics: energy cannot be created or destroyed but can change from one form to another

­Endothermic process: absorbs energy from their surrounding; heat flows from the surroundings into the system; surroundings DO work on system

­Enthalpy (H): measure of total enegery of a system

­Enthalpy Change(Delta H): equal to the transfer of heat into or out from a system at constant pressure

­Enthalpy of Fusion: Energy required to convert a given amount (mol or g) of a solid at its melting point into liquid state

­Enthalpy of Vaporization: Energy required to convert a given amount (mol or g) of a liquid at its boiling point into gaseous/vapor state

­Heat Capacity: quantity of energy needed to raise the temperature of an object by 1 degree C

What is the content of fear of a rap planet by j.d. considine?

What is the content of brown versus the board of education?