Description: This is the completed study guide for quiz 4, the final quiz, in age of globalization.

Eugh...this class is soo hard! I'm so glad that you'll be posting notes for this class

 What is Homestrings and why was it created?

development opportunities in their home countries.

 What does Homestrings sell – to whom and why?  o Homestrings capitalizes on investment opportunities;  Homestrings manages much of the headache of the

investment process, so its clients can not only invest  easily but have reassurance that their money is making a  difference and that there was a good chance of returns.  o What its built on

 What is the Law of Third Generation Return? Is it still  relevant today?

residents; because of cultural differences they will have  difficulty doing so. The second generation will succeed in  assimilation. The third generation will revere the country  of origin.

o “what the son of the migrant wishes to forget, the  Don't forget about the age old question of What is the Demand equation?

o This law is less viable in the 21st century because of  media and globalization.  We also discuss several other topics like What is conditioned stimulus?

 How has globalization affected many migrants’ political,  economic, and social relationships in their countries of  origin?

o There are capabilities to continue to invest and continue  connection with their countries of origins. The generations  of migrants can stay closely connected with the culture of  origin.

What is the practice of conducting business according to both local and global considerations?

 Why is 1990 an important year for migration trends and the  word “diaspora?” What is the relationship between these  two issues?

o In 1990 both forced and voluntary migration  skyrocketed. This changed the historically

disproportions of what groups of people were

displaced and drastically stimulated the cross

boarder flows of people and ideas.

 What is a diaspora? Why do we say that being a member  of a diaspora is an “opt-in” identity?

o Diaspora: the body of Jews or Jewish communities  outside of Palestine or modern Israel

o diaspora: “a social- political formation, created as the  result of either forced or voluntary migration, whose  members regard themselves as the same ethno-national  origin and who permanently reside as minorities in one or  several host countries. Members of such entities maintain  regular or occasional contacts with what they regard as  their homelands and with individuals and groups of the  same background residing in other host counties”

 What are remittances and why are they particularly  important for developing countries?

o Remittance- the sending of money, checks, etc. to a  recipient at a distance  If you want to learn more check out What are the terms use to analyze Social Class?

 What are the 6 development benefits of diaspora  investment?

 What does the US Agency for International Development  (USAID) do to promote diasporas and development?  o USAID is interested in diaspora engagement NOW  because:

 Diaspora as partners under 2015 SDGs

 How does the hashtag #TheSquare illustrate the role of  social media in global social movements?

o #TheSquare showed the difference that social media  makes on governmental responsibility to people pushing  for change. Social media allows campaigns to be diffused  around the world even when a government is trying to  cover up people’s voices

themselves or their society online, so remain unaware of  global internet movements or opinions. This might inhibit  social change because individuals feel globally connected  even though they are not.

 What does this quote mean: “We live in a world of  imagined cosmopolitanism.”

o people feel engaged or cosmopolitan even though they  are not, due to the filter bubble Don't forget about the age old question of What is isotonic to the body?

 Who is Patrick Awuah? What did he do and why is this an  example of the importance of cross-border idea flows due  to globalization?

 Awuah is the founder of a liberal art’s school in Africa. He  believes that liberal education in areas of poverty promote non corrupt leaders who enact positive change; so he is trying to  spread this education throughout Africa

 Why did Taco Bell decide to enter into the Indian market?

 What are the 3 components of culture?

 Be able to give examples of how the Bhutan video shown  in class illustrates good and bad aspects of the cross border flow of ideas associated with globalization.

 Define cultural convergence and divergence. .  o Cultural Convergence: The tendency for cultures to  become more alike as they increasingly share technology  and organizational structures in a modern world united by  improved transportation and communication.

o Cultural Divergence is the divide in culture into different  directions, usually because the two cultures have become  so dissimilar. The Amish provide an easy example for  understanding cultural divergence.

o Cultural imperialism is the imposition of a foreign  viewpoint or civilization of a people Don't forget about the age old question of Where do cliff swallows live?

o People associate globalization with imperialism because  historically the two have gone hand and hand, in less  educated societies

o Glocalization is the practice of conducting business  according to both local and global considerations.

o The taco bell case described the way in which taco bell  struggled with both having glocalization tendencies and  lacking in.

 Why and how does the story of the Gros Michel banana  illustrate the benefits and negatives of the cross-border  flow of product due to globalization?

o It perfectly illustrates the best of the increase supply and  travel of goods, however it also displays the negative  impacts on the environment and labor forces

 What is happening with the Cavendish banana globally?  Why is it vulnerable and how has globalization played a  role? What is its future according to scientists and how  might this impact individuals, firms, and nations?  o International banana trade began in early 1800s

 What is fast fashion?

o Fast fashion is a contemporary term used by

fashion retailers to express that designs move from

catwalk quickly in order to capture

o The need for constantly new product means huge  amounts of water and other resources are being used  wasteful in large quantities to keep up with the amount  needed.

 Why does H&M not know for certain at the beginning of the  case whether they have sourced from Rana Plaza or not?  o The businesses H&M and many other places use to

create their product often time contract out, with little  documentation, to sweatshops and factories who also

may contract out. There is little accountability in the

 What are the drivers of cross-border flows of product and  production? Be able to list and explain each.

 How have trends in global trade changed since 2008 and  what are the 3 reasons why this has taken place?  o Before the 2008 crisis, global trade grew as much as  TWICE the rate of global output for DECADES…

o Since 2011, trade growth has slowed to be in line with –  or even below – the broader growth of the global

 What is a supply chain? What is outsourcing?  o Supply Chain: The network created among different  companies producing, handling and/or distributing a  specific product from inputs to consumer.

o Outsourcing: To obtain goods from an outside

o or foreign supplier in place of an internal source

 What are some of the internal and external to the firm risks  of global supply chains? 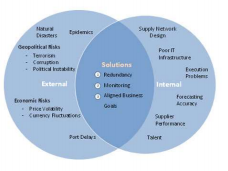  How has the textile and apparel industry contributed to  development in many nations?

o The textile and apparel industry is the first industry  nations develop into after agricultural industries, so it  stimulates the economies and progress in developing  countries.

 Why do some people say the concept of a sweatshop is  “relative?”

o – a shop or factory in which employees work for long  hours at low wages and under unhealthy conditions.  o Varying degrees of conditions lead this to be subjective  o See Travels of a T-Shirt Discussion - “Sisters in Time:  From the Farm, the Sweatshop and Beyond”

 What was the Agreement of Textiles and Clothing and why  is it important for the globalization of the textile and  apparel industry?

 How has quota elimination in the textiles and apparel  industry affected individuals, firms, and nations?  o Vastly stimulated trade and women’s roles in work

furthered the development of sweatshops around the  world?

o Fast fashion directly connects to increased need in the  amount of quota produced by sweatshops, therefore the  increase of this trend increases worldwide textile

 Does Pankaj Ghemawhat (featured in the TED talk) believe  the world is flat? Why or why not?

o No, it is a metaphor for the increased intercommunication  and trade networks globalization has provided the world  o “Globaloney can be harmful to your health”

 What is the DHL Global Connectedness Index? Which  countries/regions are some of the leaders and laggards of  this index?

o How active nations are in global interaction, it seems to  directly correlate with development however not with  trade

 Depth – how much economic activities/flows are

international vs. domestic by comparing size of

international flows (and stocks cumulated from prior

year flows) with relevant measures of its domestic

 Directionality – examines whether and to what

degree activities of flows are inward or outward.

 What is the main argument of the article, “Globalization:  The Good, The Bad, and the Uncertain?”

o “While global policy has been focused on facilitating  integration, the implications of growing interdependence  have been largely ignored.”

 “To harness these opportunities, we need an

intellectual revolution. We need a citizen’s

mobilization and we certainly need a fundamental

Is globalization good, bad and for whom? What were some of  the main ideas discussed in class along each of these themes?  o Multinational Production: Firms are firms, but big decisions at  Intel were made by people.

o Negotiations: There are good and bad negotiators, but the  structure of the negotiation is your friend. Or enemy.  o Inequality: Globalization can increase or decrease inequality for  countries, regions, groups, families, or individuals.

o Resource Pressures: Globalization has both contributed to  climate change and pressures on natural resource stocks but  also has increased opportunities for the collaboration necessary  to work toward solving these looming problems.

o Cross-border Flows: Increased flows of ideas, people, product  and production globally has increased potential for innovation,  creativity and growth while at the same time increased risk for  conflict created perceived threats to local cultures, and even

why does Halogens increase in size going down the periodic table?

How did the carving up of Africa lead to tension among the European nations?